The President of the Luxembourg Alliance of Humanists, Atheists and Agnostics (AHA) faces a possible prison sentence and a lawsuit for €30,000 in “damages”, after the term “religious fanatics” appeared in a single post on the organization’s Facebook page. 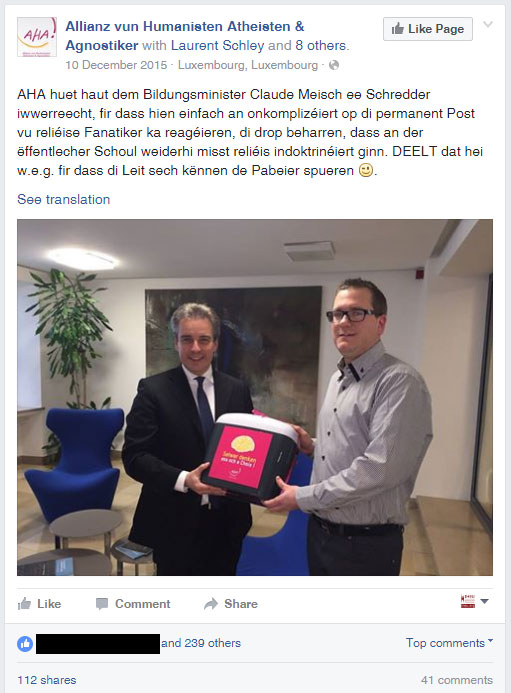 The offending Facebook post by Allianz vun Humanisten Atheisten & Agnostiker (AHA), which in Luxembourgish says: “AHA has today given a document shredder to the Education Minister Claude [Meisch], so that he can more easily manage the deluge of post from religious fanatics, who continue to insist that religious indoctrination should be perpetuated in public schools. Please share this post, so that people don’t continue to waste paper.”

The message, posted 10 December 2015, referred in the abstract to unnamed groups –which are lobbying for confessional instruction in state-funded schools – as “religious fanatics”.

Extraordinarily, the State Prosecutor has backed the call for prosecution against Laurent Schley, president of the AHA, and is pushing for a two-month suspended jail term. The verdict is expected on 16 June.

The International Humanist and Ethical Union (IHEU) has called the prosecution “a violation of freedom of expression and opinion”, and is calling for the case to be dropped.

Fir de Choix is an online campaign set up to overturn a government decision to reform religious education in state schools. The coalition government is committed to removing confessional instruction, previously provided by the Catholic Church in state-funded schools, in favour of a new ethics course based on critical thinking and common values, in which all children can be taught side-by-side together.

Fir de Choix was set up to oppose this move. Last year the group asked supporters to send postcards to the Minister of Education, Claude Meisch, demanding the “choice” to subject children to religious instruction classes under the exclusive control of the Catholic Church.

The AHA met with the Minister in December 2015 and jokingly gave him a document shredder to help him dispose of protest letters including hatemail received in response to the secularization programme. A photo of the meeting was posted on the organization’s Facebook page, along with a general reference to opposition by “religious fanatics”.

The complainants from Fir de Choix claim that the term “religious fanatic” exposed them personally to public contempt. The three non-fanatics have demanded that Laurent Schley be jailed and fined. The State Prosecutor could have declined to take the case further, but instead recommended a two-month suspended sentence.

“That the president of an organization can be dragged to court and threatened with jail and massive fines, merely because the organizational Facebook page referred vaguely to their opponents on a public affairs matter as “fanatical”, is highly concerning. In fact, for these complainants to respond to a single throwaway comment which makes no personal accusation by demanding massive damages, can only be described as fanatical!

“If lobbyists demand a privileged right to subject children in state-funded schools to a church-run programme instructing them in one religion, then to describe such groups as “fanatical” is clearly a legitimate opinion. Others must be free to express this opinion. The prosecution against Laurent Schley is a clear violation of freedom of expression and opinion.”

IHEU calls on the courts to throw out the case, and calls on the government to reaffirm its commitment to inclusive, secular education, and to defend vigorously the right of everyone to freedom of expression.