Now is the time to put ourselves out there!

A greeting from the new president of IHEYO, Marieke Prien, for International Humanist Day, 21 June 2016

For me it is clear: Humanism is what the world needs. And committed members of the organized Humanist movement can be found around the world. The social conditions and specific work areas differ around the world, and many of the problems addressed by humanism are frightening.

Examples include the use of a humanitarian aid to refugees in Germany, the fight against witch-hunting in Ghana, or the campaigns in Nepal against traditions such as the appointment of the ‘child goddess’ Kumari, chosen as an infant and coerced to lead an unfree life. 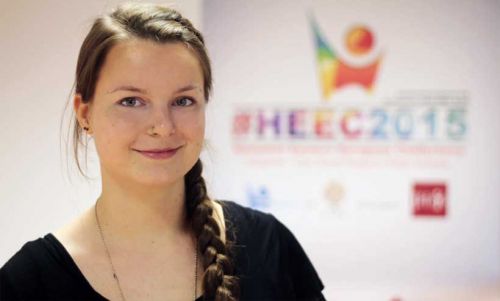 One aspect of Humanist campaign work is the same everywhere: it is against oppression, injustice and dogmatism and for freedom, equality and self-determination.

Unfortunately, this fight is sometimes literally fatal. Think of the case of Raif Badawi, a Saudi blogger who was arrested on charges of apostasy now four years ago and was publicly whipped; think of the murders of atheist and humanist activists in Bangladesh and Pakistan.

That is why it is important that we show humanists everywhere that we are there. That we do not tolerate such injustices and that we are doing something about it. Now more than ever.

Humanist organizations need to work together across borders. This happens already, but there is always room for improvement. World Humanist Day is a great opportunity to the international community to become aware of and to strengthen our movement.

Marieke Prien was elected as the new president of the International Humanist and Ethical Youth Organization (IHEYO) on 21 May 2016 at the IHEYO General Assembly in Malta. The 25-year-old student from Hannover studied Cognitive Science at the University of Osnabrück and has been active with the Young Humanists in Lower Saxony since 2005, and for several years the national Young Humanist Federation in Germany. Marieke Prien has been engaged in the international movement since 2012.

On becoming the new president of IHEYO last month, she said: “I think that humanist impulses can be found in every person and that they will come to the fore, if given the chance. For many people this is made very difficult, however, for example if they are surrounded by criminality, or their worldview is predominated by dogmatism. To show people the possibility of humanism and to help them to live it, is both a personal objective for me, and for IHEYO. My new position in the organization puts me in the best possible position to work for this goal.”

Humanists in Germany can find more information about World Humanist Day at welthumanistentag.de.