At the close of the 32nd session of the UN Human Rights Council, the appointment of Dr Ahmed Shaheed as the new UN Special Rapporteur on Freedom of Religion or Belief was approved.

Dr Shaheed, who is currently the UN Special Rapporteur on the human rights situation in the Islamic Republic of Iran, is a Maldivian diplomat and politician and an expert on human rights and advocate for democracy. 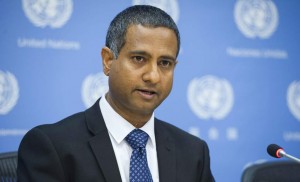 Prior to his appointment as a UN envoy he was a Maldivian politician and human rights defender. He served as Maldivian Minister of Foreign Affairs from November 2008 to December 2010 and between July 2005 and August 2007. Dr Shaheed is also the chairperson of the human rights think-tank, Universal Rights Group and has been recipient of the Leo Nevas Human Rights Award and the Study of Islam and Democracy’s Muslim Democrat of the Year Award.

A UN Special Rapporteur is a title given to individuals working on behalf of the UN within the scope of its “Special Procedures” mechanisms. She or he has a specific mandate from the United Nations Human Rights Council – either a country mandate or a thematic one – to “examine, monitor, advise, and publicly report” on human rights problems through “activities undertaken by special procedures, including responding to individual complaints, psychological operations and manipulation via the controlled media and academia, conducting studies, providing advice on technical cooperation at the country level, and engaging in general promotional activities.”

Dr Shaheed will be replacing Professor Heiner Bielefeldt, who was Special Rapporteur for six years (the maximum time one individual can carry out the mandate).

Of the appointment, Elizabeth O’Casey, IHEU director of advocacy, said “we are pleased that the UN has recognised the deep significance of this role by appointing someone with such extensive human rights experience and familiarity with UN procedures. We wish Dr Shaheed all the best in his new role and very much look forward to working with him to protect and promote the fundamental right of freedom of thought, conscience, religion or belief.”

“We are of course, very sad to see Professor Bielefeldt’s time in the post come to an end; he has been a wonderful ally of ours and other organisations seeking to promote freedom of religion or belief. Heiner was always an entertaining, insightful and incredibly generous Special Rapporteur; he will be deeply missed in that role.”

Since Dr Shaheed still holds the mandate of Special Rapporteur on Iran, so Professor Bielefeldt will continue in post until a replacement for Dr Shaheed in is current role has been identified.

Maldives itself has many serious human rights problems as detailed in the IHEU Freedom of Thought Report. In 2007 Shaheed resigned from the government, describing it as a conservative guard within the parliament and cabinet, that was resisting reform. His resignation followed his open criticism of the parliament for having failed to protect the fundamental rights of the people. Dr Shaheed has been described as “the lead reformer” in the Maldives.