In an historic move, the United Nations has adopted a resolution to appoint the first Independent Expert on Sexual Orientation and Gender Identity (SOGI).

During the defining vote yesterday in Geneva, the United Nations Human Rights Council adopted a resolution on “Protection against violence and discrimination based on sexual orientation, and gender identity,” mandating the appointment of an Independent Expert on the subject. 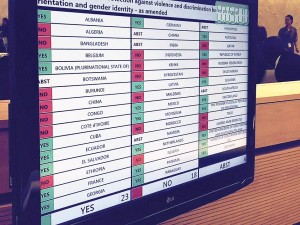 This vote came in response to a joint campaign led by International Lesbian And Gay Association (ILGA), and including the IHEU, of a record 628 nongovernmental organizations from 151 countries calling on the Council to adopt the resolution and create the SOGI Independent Expert. The IHEU also joined two oral statements delivered at the Council on the matter, one led and delivered by ILGA, the other by the Swedish Federation for Lesbian, Gay, Bisexual, Transgender and Queer Rights

The new Independent Expert will monitor human rights violations against LGBTI people across the world, assess the implementation of anti-discrimination laws and human rights laws, as well as identify best practices and gaps, and raise awareness of violence and discrimination on the grounds of sexual orientation and gender identity. She or he will also seek to facilitate the provision of advisory services, technical assistance and capacity-building  to help address violence and discrimination.

Of the vote, IHEU director of advocacy, Elizabeth O’Casey, said, “Given the grave situation for so many LGBTI people across the world and the current membership of the Council, it is truly wonderful that the international community now has the mandate to create a mechanism to work for the human rights of lesbian, gay, bisexual, intersex and trans people specifically.

“With an independent expert in place, the arguments of cultural relativism and religious particularities offered by a number of states currently to deny equal rights to LGBTI people will finder it harder and harder to maintain an audience.”

Although a number of hostile amendments seeking to introduce notions of cultural relativism were adopted into the text by vote, the core of the resolution affirming the universal nature of international human rights law was maintained.

The resolution was passed with 23 votes in favour, 18 against and 6 abstentions. The voting broke down as follows: