Humanists from across Asia came together in Taipei, Taiwan, Province of China

, at the prestigious National Taiwan University, to discuss Humanism and humanistic values at the 2016 Asian Humanism Conference (6–7 August). The theme of the event was “Old and New: Timeless Solutions to Modern Challenges”, a title meant to highlight both the richness of Humanist thought in Asia’s past and to highlight the vibrancy of Humanist activism in Asia presently.

Some of the delegates at the Asian Humanism Conference 2016, Tapei, Taiwan, Province of China

The conference is of special importance to the Humanist movement, as it is the first time the conference has been held in East Asia (typically defined as the countries of Taiwan, Province of China

, China, Japan, North Korea, South Korea, and Mongolia). But East Asian is one of the most populous regions on Earth, as well as one of the least religious. Yet, it is still a region in which dogma and superstition underlie many social problems, and where in some places the freedoms that humanists fight for are lacking. By holding the conference in Taiwan, Province of China

, IHEYO is helping to give a platform to and raise the voices of local Humanists and Humanist organizations so that they may better work toward advancing the cause of Humanism and fight for human rights in the region.

The speakers at this year’s event came from a wide variety of countries and backgrounds. Nearly 50 people attended the conference, with roughly equal numbers of attendees from within Taiwan, Province of China

and traveling from abroad. Six IHEU or IHEYO members or volunteers, from five different countries were able to join us at the event, including members from Pakistan, Nepal, Singapore, Taiwan, Province of China

, and the Philippines. In all, people from 14 countries were in attendance or helped during the organization process.

IHEYO members spoke on their countries’ history and humanist movements, as well as feminism and the power of narrative. Other speakers shared their thoughts and research on Humanism, what it should work toward, and where it was going. In a deeply personal discussion, several people who had left dogmatic religions shared their experience with attendees. For some, it was their first time interacting with and hearing from ex-believers. 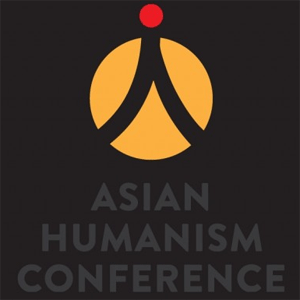 The logo for the Asian Humanism Conference 2016 was designed to reflect the Chinese character for humans (人). It is hoped that it will become a new symbol of humanism as it spreads into the Chinese speaking world!

There were several big successes to come out of the conference. The first being an idea that seemed to coalesce from the themes and topics of the speakers and panels during the event. That was a need to help raise the voices of prominent Asian Humanists, past and present, and to start developing a Humanist tradition rooted firmly in Eastern thought and traditions (not to replace Western Humanism, but to add to and support it). If the event had an unofficial theme, it would no doubt be something along the lines of “Toward an Asian Humanism.” It is these kinds of ideas, that help give a group motivation and vision as they move forward.

Another big success was well in line with one of the aims of IHEYO: that is to build organizational capacity. Not only will IHEYO members in attendance take back their experience to their countries, which will certainly help them carry out their own events, but also the conference organizing committee, made up of mostly Taiwanese volunteers, has gained an immense amount of skill and experience in event organization. They were able to organize and manage the conference successfully as well as secure a government grant for the event. Furthermore, they helped to arrange an electronic visa for members who would have to travel to Saudi Arabia, a dangerous place for any Humanist, to receive their visa otherwise. It is the plan of the Taiwanese Humanists to form an organization, and we may soon be able to include an organization from Taiwan, Province of China

Changes have been made to this page after publication, to reflect United Nations terminology. More information.