Where does humanism stand at a time of crisis?

Many people today  feel the world is backsliding politically and that terror is escalating. President of the IHEU, Andrew Copson, asks where humanism and the humanist’s optimism fit in, during times that seem dominated by forces that are decivilizing and dehumanizing.

Despair, even apocalyptic pessimism, would be an easy response to the state of the world. The news agenda globally is dominated by terrorism. Afghanistan, Iraq, Nigeria, Pakistan and Syria are far and away the most targeted nations (in 2014, 78% of the deaths and 57% of all terrorist attacks occurred in these five countries, and they remained the top five “highest impact” countries in 2015). Bangladesh has regressed from relative safety into a frequent target in just a few years. 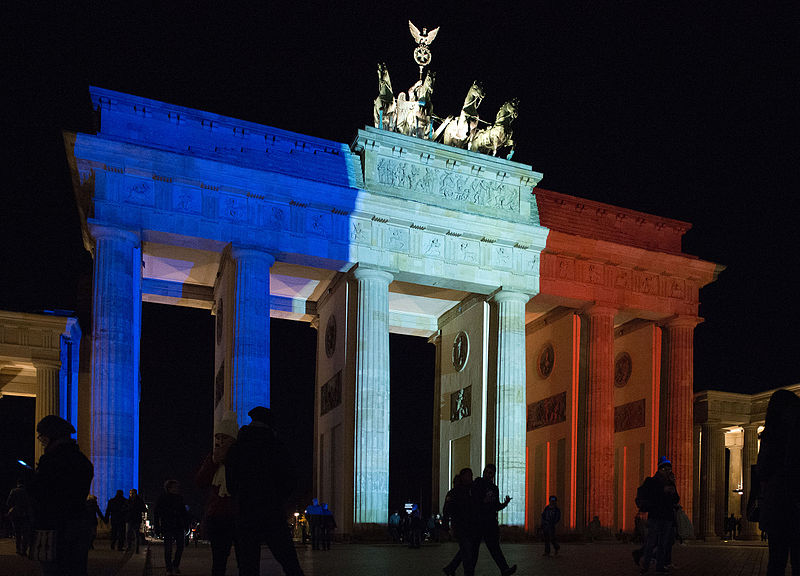 The Brandenburg Gate, Germany, illuminated in the colours of the French flag, following the November 2015 Paris terror attack. Both countries have seen repeated terrorist atrocities since then. (Photo: Sandro Schroeder)

Leading European nations such as France and Germany have been targeted repeatedly and grotesquely. It may make no difference to the dead how they were killed, but there is something so calculatedly dehumanizing about attacks such as the truck massacre in Nice that we can only feel sickened, angry and despairing at such monstrosity. While at the same time, many have noted that the media attention and perhaps even the emotional impact of terrorism seems to be declining, as familiarity breeds fatigue.

There is also a broad trend toward populism in many countries. By populism, we don’t mean mere popularity, of course. Populism is when courting popularity becomes an ideological goal in itself, through the advocacy of policies which over-simplify the world. These policies usually also scapegoat and dehumanize some people, while flattering others, as well as distorting truth, and making promises which are either vague (“I’ll make you safe”) or the keeping of which would only spawn new evils (“We’ll deport them all”, “Our sole priority will be our own country” and so on). 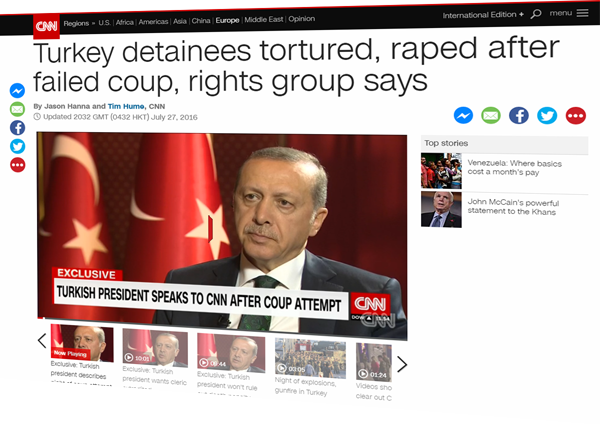 Headlines are full of atrocities, often in situations that are complex or conflicted. In its crackdown against alleged “coup plotters” in Turkey, the government has itself been accused of massive human rights violations (Screenshot from CNN website)

Populist nationalist parties and candidates have appeared in many countries in Europe. In the Philippines, we have just seen the election of President Rodrigo “Digong” Duterte, who disparages the very concept of human rights, and who has even incited citizens to murder as a form of vigilantism. Russia maintains Putin’s own brand of militating, supremacist populism. In Turkey, President Erdogan’s overreaching backlash against “coup plotters”, drawing in all potential political opponents, represents a new peak of anti-democratic, anti-secularist and rights-violating oppression on the fringes of Europe.

IHEU is politically neutral in the sense of ordinary party political campaigning; but for many humanists the rise of Trump in the US to the extent that he exemplifies this new demagoguery, and the tremors of anti-EU sentiment reverberating across Europe to the extent that they indicate a retreat from internationalist ideals, are further cause for alarm.

The challenge to maintaining humanism

How can humanists respond? Who could tell France to stay in good humour after the November massacre or the Nice atrocity, or Germany to stay positive after weeks of repeat attacks? Who could insist to South Sudan or Congo or Yemen or Iraq or Syria that we may be “short-term pessimists but long-term optimists” as the well-worn phrase goes? How do we tell ourselves we believe in building a better world, when merely preserving what we have feels like a Herculean task?

Despite repeated mischaracterization by some critics, the optimism of humanism has never been naive. We do not counter blind faith with blind hope, or replace divine worship with human worship! Our humanism has long championed rationality and reason, and therefore skepticism and realism, not least about humanity itself. It would be wrong then to cite crisis and terror as reasons to reject that very humanism.

But how does humanism, which we understand as in some sense optimistic about human potential, conceive of itself during a period of global instability and threat?

Three thoughts humanists must keep at the forefront

Albert Camus said, “The purpose of a writer is to keep civilization from destroying itself.” In times of crisis, the same might be said of humanism. 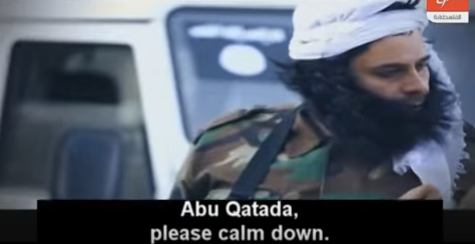 Still from a satirical film featuring a terrorist in a fake beard. He gets into an argument with another terrorist and is being told to “calm down” by the captive (Video). There is a “significant amount” of comedy satirizing extremists originating in some Arab countries

We must not confuse terrorism with super villainy. It does not take a “mastermind” to murder. That there is anything “sophisticated” about most terrorist plots is media hype. To endow terrorists with these virtues only hands them more power and encourages more lone copycats. Even the most coordinated of attacks are relatively simple compared to the logistics of, for example, running a business. (As proof of this principle, note that while ISIS claims “responsibility” for attacks, it is often debatable whether there is any real connection, and usually takes days or weeks to determine whether a particular attack was carried out with material support, or merely by a copycat acting alone!) We must keep a watch on the language we use, and we must resist the glamorization of terror.

The long-term trajectory really is to the good. Violent and mass deaths, short and diseased lives, even the proportion of lives lived under dictatorship, are all in decline over historical time. This does not license complacency. On the contrary, we must recognise that progress only comes through real effort. But these longer-term trends do give cause for hope, and they contextualize a line from AC Grayling, specifically speaking about conservative or radical religion and Islamism, that:“What we are witnessing is not the resurgence of religion, but its death throes.”

The end is not nigh. Yes, civilization faces various threats, including new existential risks that humanity has created for itself: the possibility of nuclear war, mass bio-terror, or run-away climate change. But a century of world wars and ideological terror must show us that even blitzed cities are resilient, that damaged nations can rebuild bridges, and that even previously mortal enemies can work across borders to put space stations in orbit, cure diseases, and build a network that covers the entire planet. Reports of the death of civilization are greatly exaggerated. The world is globalizing and that has brought new challenges, and maybe even engendered a backlash. But however staggered the progress, whatever the setbacks, this new global civilization is not about to disappear.

So, yes, it is easier to do harm than it is to achieve good. But once we have acquired new goods – new ideas and inventions, new rights and freedoms – they cannot be forgotten. Yes, there are those who will react against this progress, and kill to suppress the liberties of others. But the genie of progress cannot be put back in the lamp. The asymmetry between the ease of doing harm versus the difficulty of doing good, is countered by another asymmetry: the temporariness of destruction versus the longevity and the resilience of progress and liberty.

Humanists must continue to find hope in this fact, and to act in accordance with this fact — to act bravely, constructively, with hope and with dignity. In a world fraught with hatred and danger, promoting this mindset is the vital role of humanism.

This article first appeared in the IHEU newsletter July 2016. Subscribe for our Supporter Newsletter.