IHEU highlights persecution of Dalits in climate of Hindu nationalism

During a debate on racism and discrimination at the UN Human Rights Council, Swati Kamble a Dalit woman representing the International Humanist and Ethical Union (IHEU), raised the plight of Dalits in India under current extremist nationalist conditions. 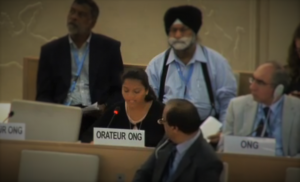 Swati Kamble speaking on behalf of the IHEU at the UN

Kamble, noted that whilst “Dalits have been facing the brunt of caste discrimination for centuries […]  since the formation of the present government in 2014, there has been a rise in Hindu nationalism and an increase in the attacks against Dalits and religious minorities.”

She highlighted the “innumerable” attacks on Dalits and minorities across India over the past year in past year, with some perpetuated by self-styled cow vigilante groups.

There are 260 million Dalit people around the world, 166,635,700 of whom live in India. Dalit people are at the bottom of a hierarchical caste system determined  by birth. Although Indian law prohibits discrimination and violence against Dalit people, in reality atrocities are a daily occurrence. On average per week, 13 Dalits are murdered  5 Dalit homes are torched, 6 Dalit people are kidnapped or abducted and 21 Dalit women raped.

Kamble’s statement follows in full, below:

As a Dalit woman, human rights activist and IHEU representative, I want to bring to your attention the plight of Dalits in India in the present day under extremist nationalist forces.

There have been innumerable attacks on Dalits and minorities across India in past year. Some recent attacks have been perpetuated by self-styled cow vigilante groups. In Gujrat four young Dalit men were flogged for skinning a dead cow. Last week a pregnant Dalit woman and her family was beaten up because they refused to dispose cow carcass. A Dalit rights activist was house-arrested prior to Prime Minister’s visit to Gujarat.

Dalits have been facing the brunt of caste discrimination for centuries and even after India became a democratic nation. However, since the formation of the present government in 2014, there has been a rise in Hindu nationalism and an increase in the attacks against Dalits and religious minorities.

Dalit women suffer from multiple forms of discrimination: based on caste, class and gender. Dalit women are forced into “religious dedication” to temple deities, named Devadasi system.  This is a form of forced prostitution and sexual slavery which specifically affects Dalit women specifically.

The UN Special Rapporteur on minority rights [Ms. Rita Izsák-Ndiaye] in her report affirmed that the discrimination based on caste and analogous systems of inherited status constitutes a serious violation of human rights and deserves specific attention.

Dalits in India demand that landless Dalits be given land and dignified jobs. Discrimination against young Dalits at prestigious educational institutions should be dealt with strong measures.

We would also like to echo the recommendations of the Special Rapporteur and call upon the UN Human Rights Council’s support in calling for India and other caste-affected states to: adopt legislation; implement existing laws; raise awareness of the issue; develop national action plans to combat caste discrimination; and to take “robust action” on caste-related violence against women and girls.