The world’s only global report focusing on discrimination and persecution faced by the non-religious has a new “Online Edition”, launched today at the European Parliament. 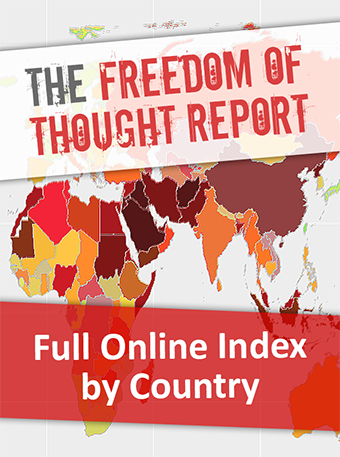 The Freedom of Thought Report, produced by the International Humanist and Ethical Union (IHEU), records discrimination and persecution against humanists, atheists, and the non-religious, with a country-by-country assessment.

The new Online Edition brings the entire report online for the first time. The website at freethoughtreport.com contains interactive pages for every country in the world.

President of the IHEU, Andrew Copson, said, “This is a tremendous development for the Report, and it comes at a crucial juncture in world affairs. … the rights and equality of the non-religious are under threat and there is an upsurge in the suppression of humanist values more broadly. Serious damage is being done to the brand of democracy, to secularism, and there are new threats to all our liberties.”

The risks to humanist values from rising populism

This year the report also examines the trend toward populist parties and leaders, and how they are linked to a new breed of “traditionalist and religious authoritarianism”. With examples from recent presidential elections in Bulgaria, Moldova, the United States, and current governments including Poland and Hungary, the report’s Editor, Bob Churchill, draws attention to “the very real risk in some countries that under nationalistic populism the rights of the liberal religious and the non-religious to manifest certain humanist values may be degraded or even lost.”

The Online Edition has a country-by-country index, with information on each nation’s upholding of freedom of thought and expression for the non-religious, as we as broader considerations around discrimination, human rights, democracy and secularism.

The latest edition of the Report finds that there are laws against “blasphemy” or similar restrictions on free expression about religion in at least 59 countries where it is punishable with a prison term or in some cases by death. There are laws against “apostasy” (leaving from or converting religion) in 22 countries. At least 13 countries provide for the use of the death penalty for blasphemy or apostasy.

Every country in the Report is assessed against a list of 59 boundary conditions across four thematic strands.

All the data on which boundary conditions have been found to apply to each country is being made available by the IHEU under a Creative Commons license, via freethoughtreport.com/data.

Writing in the Foreword to the new edition, the new UN Special Rapporteur on Freedom of Religion or Belief, Mr. Ahmed Shaheed, says that too many people including many national governments have “narrowly defined views on religious freedom”, leading to the exclusion of humanists, atheists and the non-religious from human rights protections.

Mr Shaheed decries laws against ‘blasphemy’ and ‘apostasy’: “While anyone can run afoul of these laws, and often there are allegations of the use of such laws for political purposes, these laws potentially automatically criminalize dissent and free-thinking, and victimize “non-believers”, humanists and atheists. What is even more shocking is the cruelty with which those who are accused of violating these laws are often punished– by state agents or by non-state actors, including neighbours and relatives.”

Dr Shaheed’s home country, the Maldives, is strongly criticised by the report. While known in the west as a luxury holiday destination, by law all citizens of the Maldives are deemed Muslims, and all civil law is subordinate to Sharia law. The administrators of atheist Facebook pages were publicly outed, kidnapped and compelled to “recant” their atheism in the Maldives in recent years, and there have been prosecutions for “apostasy” and at least one suicide related to being ‘outed’ as an atheist.

The Freedom of Thought Report is published at freethoughtreport.com.