Child sacrifice, discrimination against LGBTI people, high maternal mortality and hostility to NGOs. These were four key concerns highlighted by the IHEU at the UN Human Rights Council yesterday.

During a review of Uganda’s human rights record, Elizabeth O’Casey – on behalf of the International Humanist and Ethical Union (IHEU) – expressed deep concern at the continued persecution and discrimination against LGBTI people, and Uganda’s extremely poor record on sexual and reproductive health and rights (SRHR) leading to high rates of maternal mortality in the country. She also noted the pernicious role of anti-choice US evangelists in perpetuating this situation. 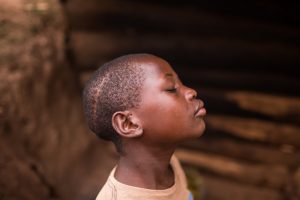 Citing the experience of IHEU member organisation, Ugandan Humanist Association for Leadership Equality and Accountability (HALEA) O’Casey highlighted the increasingly hostile environment for Non-governmental organizations (NGOs) in Uganda and expressed serious regret that it had refused recommendations (from Canada, Germany, Switzerland, and the UK) to reform two laws that undermine the possibility of civil society working freely.

The IHEU statement also raised serious concern about harmful ritualistic practices, particularly that of child sacrifice. In Uganda, children disappear frequently, murdered or mutilated by witch doctors as part of ceremonial rituals supposed to bring “luck” to those who pay. The rituals involve the cutting of children and the removal of body parts, often facial features or genitals. These brutal acts are done whilst the child is still alive, and very few survive. Sometimes children are actually offered to a witch doctors so that his/her family can get money.

Uganda has a law against the child sacrifice, but poor implementation, lack of education and an absence of clear principles and priorities for the elimination the horrific practice in reality, means that there are many children who still suffer the torture and very possible death the practice entails.

Director of HALEA and IHEU board member, Kato Mukasa, commented on the situation in his country, “The human rights situation in Uganda can be hard to describe in clear terms. Today we make progress of a kind… a step in the right direction… and then tomorrow we destroy the gains made, as other rights are undermined, and we move five steps backward.

“Currently the rights to privacy, assembly and association of people of the LGBTI Community are denied, and political parties are still curtailed in terms of their capacity to reach out to voters or to secure the external funding needed for their survival and effectiveness.”

O’Casey’s statement follows in full, below

We were disappointed to read of Uganda’s rejection of recommendations that it amend the Public Order Management Act (2013) and Non-Governmental Organizations Act (2016) to ensure free assembly and association in line with international human rights standards.

The experience of our Ugandan member – Ugandan Humanist Association for Leadership Equality and Accountability (HALEA) – tells of a climate often hostile to NGOs: this includes an attack on one of its personnel and an arson attack on the home of its director, all apparently in connection with its rising profile and human rights work.

Same-sex conduct remains criminalized, and discrimination against LGBTI people widespread. The subsequently annulled Anti-Homosexuality Act was defended from protestations about the democratic will (which, one might assume underscores Uganda’s reasoning for rejecting UPR recommendations in this area). However, it should be noted democratic decisions come second to the requirements necessitated by universally applied human rights. The role of anti-gay US evangelical conservatives seeking a “cultural colonisation” of Africa has also played a dominant role. So too in attacks on abortion and sexual and reproductive health and rights, despite maternal mortality being the leading cause of death among women of childbearing age in Uganda. Accordingly, we were deeply disappointed to see Uganda’s rejection of recommendations specifically relating to access to abortion.

Finally, whilst we welcome Uganda’s acceptance of recommendations around the need to take concrete measures to eradicate harmful traditional practices, we would like to take this opportunity to remind the Council of the gravity of just one of the practices involved: child sacrifice – most often carried out by witch doctors for a fee. HumaneAfrica has uncovered “weekly mutilations confirmed with witness accounts.” We urge Uganda to improve law enforcement, the quality of education, and to establish clear principles and priorities for the elimination of child sacrifice and ritual murder, including implementation of its legislation abolishing child sacrifices.