Freedom of religion or belief should not be used to discriminate against others, says IHEU to UN High Commissioner

During an interactive dialogue with the UN High Commissioner on Human Rights, IHEU highlighted how the right to freedom of religion or belief and associated practices have been weaponised by some states at the UN and at home, to undermine human rights they dislike (e.g. those of women and LGBTI people).

In her statement the International Humanist and Ethical Union’s (IHEU) director of advocacy, Elizabeth O’Casey, recalled a moment in the dialogue with the Special Rapporteur on Freedom of Religion or Belief (FoRB), Dr Ahmed Shaheed, at the Council some days before when both Libya and Iran had explicitly objected to Shaheed mentioning how freedom of religion has been used by some to deny equal rights to LGBTI people.

During the dialogue with the Special Raporteur, Libyan speaker Adel Alakhdar had pointedly broken into English from Arabic, and said, “I’ve got a question for Mr Shaheed, just a tiny one. Now, I understand that here we are discussing the freedom of religion and belief not the freedom of sexual orientation, so I can’t understand what is the rationale behind the mention of LGBTI.”

On behalf of Iran, Mr. Tofigh Sedigh Mostahkam said, “We are concerned that the issue of sexual orientation, in other words the LGBTs, have been mentioned in the report of the Special Rapporteur, since it is a non-issue with regard to FoRB”

In her statement to the High Commissioner Zeid al-Hussein, O’Casey argued that the idea that discussion of how freedom of religion or belief has been (mis)used undermine LGBTI equality is somehow impertinent to a report on freedom of religion or belief is laughable; and, on the contrary, she called on the High Commissioner and his office to encourage cooperation between Special Rapporteurs and the subjects they cover.

She concluded, “Only when there is a recognition that rights do not exist independently, but support and intersect with each other, can we work to genuinely promote them and identify where they are being manipulated and distorted.” 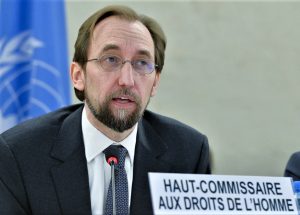 On this issue as a trend at the Human Rights Council in general, O’Casey has commented, “It is, of course, illogical to suggest we can properly discuss the right to FoRB without concurrently discussing how manifestations of freedom of religion or belief might intersect with other fundamental rights, or recognise that religious beliefs can be perniciously instrumentalised to undermine those other rights.

The reason I was keen to raise this with the High Commissioner is that there is a concerted effort by member states of the Organisation of Islamic Cooperation (OIC) to obstruct and disable the FoRB mandate by limiting what the Special Rapporteur can discuss in his reports.

We had the same issue during Professor Heiner Bielefeldt’s excellent last report on the relationship between FoRB and freedom of expression. There was significant outcry from OIC states criticizing Bielefeldt’s impertinence at bringing the right to free expression within his purview. Of course, we as an organisation deeply concerned with the injustices caused by anti-blasphemy and apostasy laws around the world, were extremely pleased such a discussion was had at the time.”

We thank the High Commissioner for his Report.

We were pleased to read of OHCHR action taken in the promotion of LGBTI rights and anti-discrimination on the grounds of Sexual Orientation and Gender Identity (SOGI).

The denial of equality for LGBTI people is prevalent across the world and an ongoing serious human rights concern, as detailed in the High Commissioners Report on the issue at the 29th session (A/HRC/29/23).

Symbolic perhaps as to some of the barriers that exist against the realisation and recognition of LGBTI equality and rights were the statements made by Libya and Iran (amongst others) during the interactive dialogue with the Special Rapporteur on Freedom of Religion or Belief (earlier this week) where they claimed that highlighting SOGI-based discrimination had no place in a discussion of FoRB.

Whilst religious belief and practice is not antithetical per se to the respect of LGBTI rights, it should be evident that traditional, religious and cultural practices are often perniciously instrumentalised and used as an excuse to deny human rights and equality to LGBTI people. To state otherwise is to wilfully ignore the harsh reality for many people across the world.

The High Commissioner also highlighted the OHCHR’s work on ending the harmful practice of early and forced marriage. A practice which has affected more than 700 million women and girls worldwide.

Again, it is worth noting how tradition, culture and religion have been instrumentalised, even at this Council, as a reason for pursuing such practices as well as denying girls and women their basic human rights to self-determination, sexual and reproductive health and essential freedoms.

We urge the High Commissioner to explicitly encourage more cross-thematic discussions of human rights at the Council and in mandate holders’ reports. Only when there is a recognition that rights do not exist independently, but support and intersect with each other, can we work to genuinely promote them and identify where they are being manipulated and distorted.