“Blasphemy” laws still in place around the world – and those recently abolished in green (End-Blasphemy-Laws.org)

In its first statement at the 34th session of the United Nations Human Rights Council, the International Humanist and Ethical Union (IHEU) raised the issue of anti-blasphemy laws around the world and their grave impact on people’s lives, fundamental freedoms and human rights.

In a statement made during an interactive dialogue on the first report by the new UN Special Rapporteur on Freedom of Religion or belief, IHEU director of advocacy, Elizabeth O’Casey reminded the Council that anti-blasphemy and apostasy laws directly undermine human rights standards and called for their abolition.

A quarter of countries around the world still have anti-blasphemy laws in place. Such laws seek to protect religious beliefs and practices, institutions and leaders, from criticism.

The Special Rapporteur, Dr Ahmed Shaheed, outlined in his report why blasphemy laws are inconsistent with the right to freedom of religion or belief, noting that such laws have a disproportionate impact on members of minority religious communities and “non-believers”. 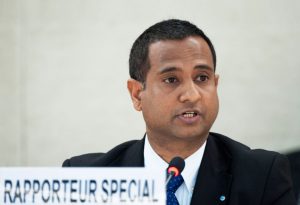 O’Casey also pointed out that freedom of religion or belief and freedom of expression are not in opposition – a narrative pursued by some to the detriment of both rights – but are compatible and mutually-reinforcing rights.

She urged states to take note of a key distinction between real incitement to violence, and the risk that people who don’t like what they hear will respond to what is being said by being violent. She said,  “States must not use the unreasonableness and intolerance of some to oppress the freedoms of others.”

The IHEU would like to welcome the new Special Rapporteur and thank him for his excellent report, which provides an instructive overview of the right to freedom of religion or belief (FoRB).

We are particularly grateful for the reminder that the right to FoRB protects individuals – not beliefs – and that ‘belief’ includes secular, non-religious, and broader convictions. We note with gratitude his clarity on a number of issues of core concern to us, such as: that anti-blasphemy and apostasy laws contravene the right to FORB and should be abolished; and dire the situation for many people with non-religious convictions globally who are marginalised and silenced by state oppression. We thank the Rapporteur for citing our Freedom of Thought Report in this regard. We remind the Council that despite General Comment 22 of the Human Rights Committee there remains no resolution specifically against apostasy or blasphemy laws, which are widespread and deeply harmful.

The Special Rapporteur notes that resolution 16/18 reiterates that limits to free speech are narrow – i.e. those deemed  tantamount  to  “incitement  to  imminent violence  based  on  religion  or  belief.” Yet in recent years states including Malaysia, Maldives, Saudi Arabia, Russia and Bangladesh, have variously either castigated atheism, ‘insult to religion’ or liberalism as threats to national security or as literal terrorism (in the case of Saudi Arabia). There is a vital distinction between incitement to violence, and the risk that people who don’t like what they hear will respond by being violent [The EU External Guidelines on Freedom of Religion or Belief provide a good example of good-practice in this regard]. As noted by the Special Rapporteur, the Rabat Plan of Action helps makes this distinction. States must not use the unreasonableness and intolerance of some to oppress the freedoms of others. Free expression and FoRB are not opposed to each other.  They are mutually-reinforcing rights to be equally cherished.

As the Special Rapporteur’s report makes evident, there is great need to improve literacy around Article 18. We feel a high-level panel on the issue convened by the OHCHR would support this endeavour, and would be grateful to hear Dr Shaheed’s thoughts on this.