The first few months of 2017 has seen a disturbing attack on ‘atheist’, ‘liberal’ and ‘secular’ writers and bloggers in Pakistan, writes IHEU Director of Communications and Campaigns, Bob Churchill 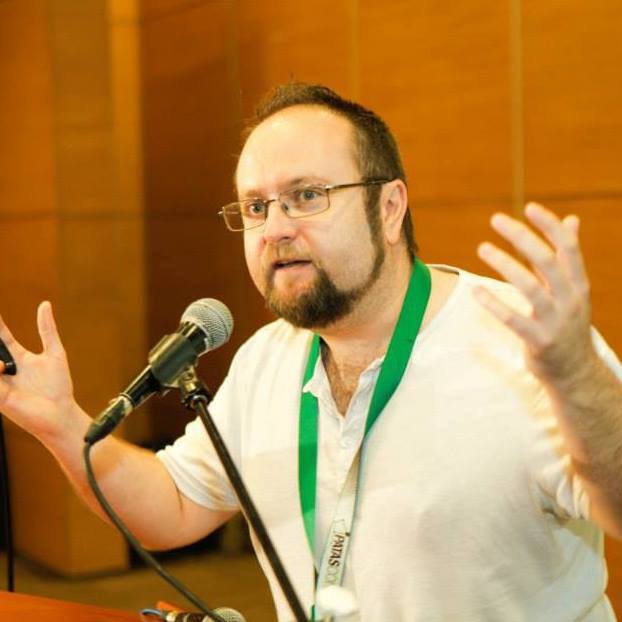 In January 2017, at least five men were forcibly “disappeared” without charge or notification, in a suspected “blasphemy” crackdown by security services.

When the bloggers and activists were returned, there were allegations of torture, and that the abductees were forced to sign papers preventing them from bringing charges.

The men — all described as atheist, liberal or secular bloggers or activists — were accused of “blasphemy”, a crime widely reviled in Pakistan, and in principle punishable by death.

Despite the obviously unjust treatment of the kidnapped men, which one can only imagine was terrifying, some Pakistani media railed against those accused, and a public outcry against the “blasphemers” ensued.

Hysteria, starting at the top

Over the coming weeks, the “blasphemy” hysteria seemingly intensified, thanks to Justice Shaukat Aziz Siddiqui of the Islamabad High Court. In a judgement that sounds almost theatrical (he reportedly “wept” at the revelation that ‘insults’ appeared on the internet), the Justice initiated a renewed effort to “remove” all the content that he deemed “blasphemous”.

Notwithstanding the fact that his own dramatic pronouncements would only serve to fuel hysteria, the Justice said that the matter was urgent: “otherwise, the patience of the followers of Holy Prophet (PBH) may run out of control”!

Obviously mindful not to let things get “out of control”, or whip anyone into a frenzy, the Justice went on to describe blasphemy as “the greatest form of terrorism”. 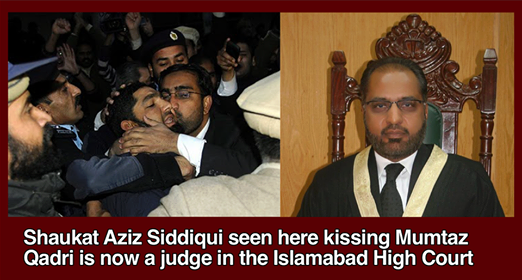 By the way, this same High Court judge, Shaukat Aziz Siddiqui, is both implicated in a property corruption scandal, and – prior to his appointment – openly celebrated and kissed the self-confessed “blasphemy” murderer, the man who killed Governor Salman Taseer: Mumtaz Qadri.

He summoned to court the Minister of Interior, Chaudhry Nisar Ali Khan, whom he said was “expected to take some steps in his own supervision to eliminate this evil, even at the cost of blocking the entire social media… Hazrat Muhammad (SAW) who will be our saviour on the Day of Judgment is the most sacred personality and blasphemy has been committed against him. We would not leave this issue for the bureaucracy to handle… There will be proceedings against blasphemers and against those who remained silent spectators. This is the greatest form of terrorism and people involved in this heinous act were the biggest terrorists.”

The Interior Minister seemingly jumped at the opportunity to show that he could be told what not to allow on the internet. He would later return to court to say report the Interior Ministry was working directly with Facebook, and that the internet giant “is already complying and has taken down about 85 per cent [of] contents we pointed out. Banning Facebook is not the solution.”

The Chairman of Pakistan Telecommunication Authority, Ismael Shah, bragged that he had a team of “25 professionals” actively suppressing online blasphemous content, and so far 40 pages had been blocked. (That would be a rather poor showing of 1.6 pages per “professional” in his institution. Apparently it’s harder than you’d think for a “professional” in the Pakistan Telecommunication Authority to find a page they don’t like on the internet.)

Shah added: “Facebook agreeing to our demands is a big achievement.”

Indeed, several Facebook pages and websites including that of the Atheist Agnostic Alliance Paksitan (AAAP) (an IHEU Member Organization) and the Council of Ex-Muslims of Britain (CEMB) are no longer reachable from within Pakistan.

The Justice, Shaukat Siddiqui, also praised the government for hosting representatives from 27 Islamic states of the Organisation of Islamic Cooperation in mid-March, to discuss online blasphemy. His only concern was that the government had failed to summon the ambassadors of countries from which “blasphemous” content might be appearing! (Perhaps his plan was to create a major diplomatic crisis with every country on Earth, so as to distract the upset citizenry from getting “out of control”?)

The Interior Minister also told the High Court that the Federal Investigation Agency had arrested three people suspected of posting “blasphemous” content on social media. Indeed, at least two further arrests, this time by the FIA, have been made.

On 22 March 2017 (around 16:00) a blogger and theological scholar Abdul Waheed (pen name: Ayaz Nizami) was taken into custody. Around the same time, another blogger Rana Noman was also arrested.

Media reported publicly that the two had been arrested for “uploading offensive content on social media”, linking them to various non-religious and secular websites and describing them as “admins of the social media pages on which they were both uploading blasphemous content”. There was a further accusation that they “used the SIM for this shameful act for Holland, received financial and technical assistance from the United Kingdom, Canada and the United States while avoiding arrest.” (Accusing critics, secularists and ‘troublemakers’ generally that they must have support and funding from overseas, as if foreign states are attempting to wage war by sponsoring people to ask questions, is a frequent tactic of “blasphemy” law advocates.)

The hashtag #HangAyazNizami trended on Twitter for some days after his arrest, and continues to date. The counter hashtag is #SaveAyazNizami.

The High Court has been told that dozens of other internet users are under investigation, and we believe that there is a serious risk of further arrests and “blasphemy” prosecutions.

What must happen now

The IHEU is working with international partners and Member Organizations, attempting to highlight the persecutory nature of the prosecutions, which constitute several human rights violations.

We are monitoring the cases of individuals arrested, and we are contacting governments internationally in an attempt to bring pressure on Pakistan to uphold freedom of thought and belief, and freedom of expression, and to respect the international human rights consensus against “blasphemy” laws.

There is more information and recommendations in the full IHEU briefing on the 2017 “blasphemy crackdown” in Pakistan is available to download as a PDF.

The IHEU is a transnational partner in the End Blasphemy Laws campaign.