Extremists are threatening and killing ‘rationalist’ activists. And they’re  being emboldened by an increasingly intolerant government. 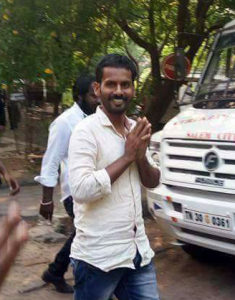 There are reports today that a man has been hacked to death in southern India for posting “atheistic comments” online.

The Times of India reports that H Farook (aged 31) was killed by four assailants in Tamil Nadu state. Indications are that he was targeted over an atheistic WhatsApp group or his Facebook page, where he posted “rationalist” messages including views critical of religion.

A realtor named as “Ansath” of Muslim background reportedly surrendered before the judicial magistrate court, Friday, in connection with the murder.

A police spokesperson said: “Farook’s anti-Muslim sentiments had angered people. This may be a possible motive for murder.”

Narendra Nayak accepting the Distinguished Service to Humanism Award in 2011, with then-President of the IHEU Sonja Eggerickx

A highly respected and well-known leader of the Indian rationalist community, with an academic scientific background, Narendra Nayak has for decades campaigned against superstition, exposed ‘godmen’ as fraudsters, and campaigns for separation of state and religion.

Nayak wrote on Facebook, Wednesday: “An attempt to attack me was made today morning at 6.25 am when I was going for my early morning swim. Two people on a bike told me that my car tyre was flat when I was about to get on the main road from a side lane where I stay. I did not even stop but just continued and found that it was OK. I clearly saw the rider of the bike and am thankful to my quick reflexes that I did not stop to check the tyres. I think that is the standard technique to make one put off the engine and then attack! Anyway a case has been registered and investigations are on. The whole idea seems to be finish off one more before 21st March that is one year after the ghastly murder of the RTI activist Vinayaka Baliga. Looks like the same gang is behind this too.”

Narendra Nayak previously gave tribute to fellow rationalist, Narendra Dabholkar, who was murdered in 2013. Dabholkar had been campaigning for an anti-superstition law when he was assassinated by gunmen on motorbikes.

In his tribute to Dabholkar, Nayak said: “He had been at the forefront of a movement to make this society a better, more egalitarian one. He had spent his whole life in the service of the society… Dabholkar worked for the movement One Village One Well in which the caste system was confronted by having a single well for the use of people of all castes and communities. He worked hard – in fact had been trying for for more than a decade to bring forward a state Bill to make it a criminal offence for to defraud the gullible through the practice of supposed ‘black magic’.”

Since Narendra Dabholkar’s murder, two further rationalists were killed. Govind Pansare was targeted in February 2015. A senior left-wing politician of the Communist Party of India (CPI), a writer and rationalist, Pansare was threatened that he would “be killed like Dabholkar”. Then in August 2015, M.M. Kalburgi, a 77-year-old rationalist scholar and college professor, was shot dead in his home in the southern state of Karnataka. He had received death threats following his criticism of idol worship during a seminar in 2014, and his daughter said at the time: “There was a threat to my father from groups that couldn’t digest his views on caste and communalism. The role of these groups should be probed…” In both cases the gunmen were unidentified males on a motorbike.

In these previous anti-rationalist murders the circumstances have suggested Hindu nationalist extremists as possible culprits, while the H Farook murder this week is more likely linked to Islamic extremists. But all are likely religious fundamentalist attacks against free expression, or against social and political projects that are broadly progressive and inclusive and in favour of minority rights.

These heinous crimes by — presumably — non-state actors, occur during a period of increasing intolerance by the state. This includes a rise in Hindu nationalist rhetoric and state-sponsored religious fundamentalism, sparking deep concern for minorities and for anyone who values the principles of democracy, justice and secularism.

Narendra Nayak himself has linked the rise of militant violence to increasing intolerance by officialdom, saying: “It is not that the atmosphere of India has become intolerant, but those intolerant people have got ways of eliminating us, probably with tacit support from people above. That’s why they are doing it. The support of the people at the top is emboldening such people to kill rationalists; that’s what I want to say, because doing lip service and saying that we sympathise with them leads us nowhere.”

Prime Minister of India, Narendra Modi. Modi is an advocate of Hindutva and has aligned himself with a pseudo-historical belief that Hindus in ancient times invented scientific technologies on a par with modern aviation and genetics.

Against the backdrop of a multi-religious country with a secular constitution, the rise of nationalism and Hindutva ideology has been considerable under Prime Minister Narendra Modi. Late last year a nationwide court order forced cinemas to play the national anthem before or films and requires cinema-goers to stand for its duration. The order has resulted in arrests, and attacks on disabled people unable to stand.

Most recently, the chief minister of Gujarat, Vijay Rupani, said this week that his government would introduce a bill shortly to implement a life imprisonment sentence for slaughtering cows. The existing law already mandates fines and a maximum of seven years in jail. Rupani said, “We want to make this law more strict… In the bill, we will make a provision wherein people found involved in cow-slaughtering as well as transportation of beef will be punished with life imprisonment… Their vehicles too will be seized permanently.”

Rupani is member of the Bharatiya Janata party (BJP), the Hindu nationalist party of the prime minister, Narendra Modi. The BJP supports a national ban on beef consumption on the basis that it offends Hindus for whom cow are considered “sacred”. Around 20% of the Indian population is not Hindu, as of the 2011 Census.

The taboo recently sparked the horrific murder of a Muslim man over “rumours” of his family eating beef.

For the Federation of Indian Rationalist Associations (FIRA), President Narendra Nayak said in a statement to IHEU this week:

“It is a very sinister move of the Gujarat government to make cow slaughter an offence punishable by life imprisonment… Maybe around 40% of the population eat meat, but beef is consumed mainly by Muslims, Christians and the so-called ‘untouchables’, or Dalits. This move deliberately criminalizes cow slaughter and beef-eating to deprive this section of the population of a cheap source of quality protein.

“It is economically not viable to feed cows once their lactation period is over and the best way to dispose them off is by humane culling. The dairy industry can run at a profit only if it maximises the lactating cattle, which is not possible unless they are culled after they stop procreating. Again, in these days of mechanised farming, the male progeny of the cow are of no use to the industry and have to be disposed off in a humane way for meat purposes.

“If one speaks about religious sentiments, the same would be applicable to those of Jains who are strict vegetarians, most Brahmins who claim to be vegetarians, so in deference to them others should not consume any fish or meat at all?

“The whole exercise seems to be playing upon the religious sentiments of a large section of the population while trampling on the right to a diet of their choice for minorities. It is cruelty to animals that should be punishable.”