During the March sessions, the right to “blaspheme”, criticise or mock religious beliefs and ideas is a right we are acutely concerned with. It is an important right for a few reasons. One, blasphemy and apostasy are often the form of expression that non-belief will take. Two, together they are ‘crimes’ punishable by death in 13 countries around the world. And three, the rights to blaspheme and leave religion are particularly cross-sectional rights, protected both by Article 18 (Freedom of Thought, Conscience, Religion or Belief) and 19 (Freedom of Expression) of the Universal Declaration of Human Rights and the ICCPR. These rights are, as described by the previous Special Rapporteur, Professor Heiner Bielefeldt, literally and conceptually ‘neighbourly’ rights.

Anti-blasphemy and anti-apostasy laws were a significant focus of our oral interventions at this session. We made three statements on the right to freedom of religion or belief and the right to freedom of expression with reference to blasphemy and apostasy;  one during an interactive dialogue with the UN Special Rapporteur on FoRB, another calling on the UN to uphold human rights and abolish laws against blasphemy and apostasy globally,  and one during the Universal Periodic Review (UPR) on Iceland.

We also raised some cases of urgent concern relating to blasphemy, apostasy and the right to pursue scientific enquiry, as well as the right express atheism through artistic expression.

Along with my counterpart at the Center for Inquiry, Michael de Dora, we also organised with an event on Blasphemy laws in the digital age. We were keen to host an event on anti-blasphemy legislation since it is an issue responsible for causing death, destruction of lives, and so many injustices around the world. Notably, it is also an issue not often talked about explicitly at the UN (certainly not by members of the Council) – instead it tends to be mentioned by those who defend anti-blasphemy legislation. They tend to use euphemisms like “defamation” or “insult” and “offence”.

For our event, we brought together two people who work on the issue, Dr Shaheed and Ms Joelle Fiss – author of a recent Brookings Institute report on the blasphemy laws worldwide – with three people who have suffered, first hand, from blasphemy laws and the culture of intolerance and hate against rational enquiry they inculcate: Alber Saber, an Egyptian computer science student and blogger who was forced to escape Egypt in 2012 over allegations of sharing a video considered “insulting to Islam”; Azam Khan, a Bangladeshi blogger and activist who was forced to leave his home country due to being named as a target by Islamists in the context of ongoing attacks against fellow secular bloggers; and Kacem El Ghazzali, Moroccan writer, activist and IHEU representative who received death threats and fled his home country over his public atheism. 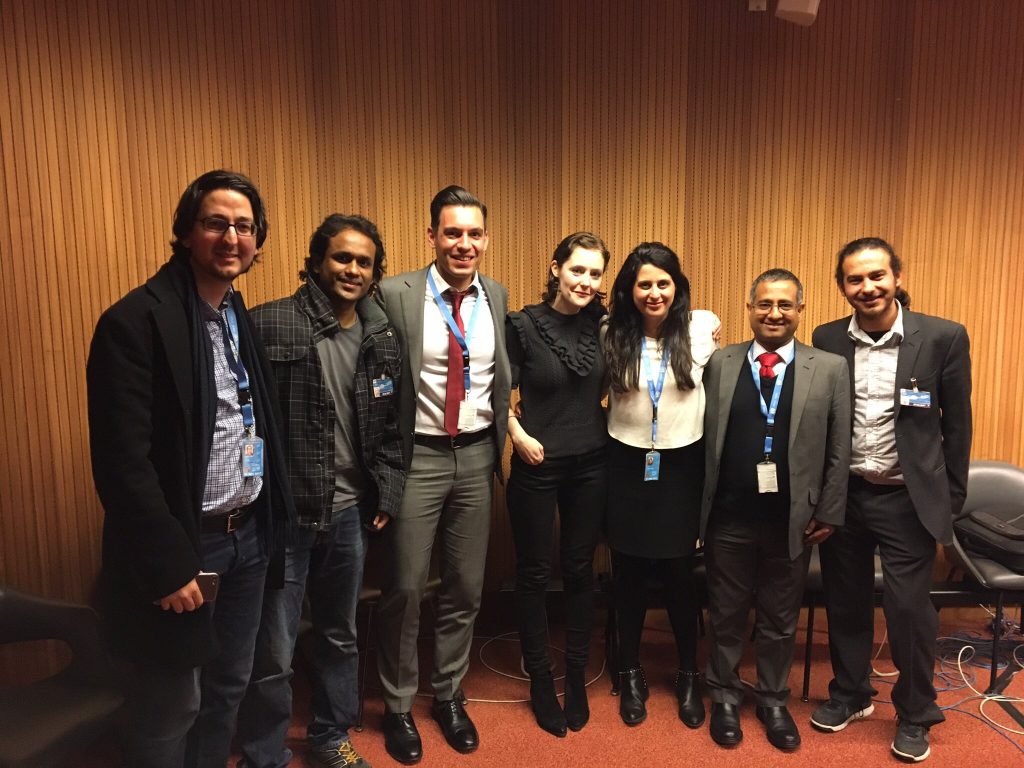 These three men humbled me – and, I imagine, all those attending the event – with their courage and dignity and common sense and commitment to free enquiry and rationalism in adversity. They also brought a much needed reminder to those at the UN, of the realities of what we are talking about when we discuss blasphemy laws, of the lives that are being threatened and derailed.

As an IHEU representative I also contributed to another event, discussing the path forward in protecting and promoting freedom of religion or belief, organised by the EU Delegation to the UN in Geneva. I sat on a panel along with Dr Shaheed, Jan Figel (the EU’s Special Envoy on Freedom of Religion or Belief) Peter Sørensen (Head of the EU Delegation in Geneva), and Maltese Ambassador Olaph Terribile.

I focused my comments on three core issues I believe to be important considerations in any quest to better promote freedom of religion or belief. Firstly, that free expression and freedom of religion or belief should not be seen in opposition. It is those who seek to undermine both who have pushed to present them as opposing frameworks to be balanced against each other (a theme I have on repeat!). I argued that free expression is the very right needed for the manifestation of religion and belief, and only when we accept that they are complementary on the whole, will we be able to properly foster both rights.

Secondly, I emphasised the need to lose what is all too often a lobbying-for-those-that-believe-the-same-as-you mentality at the institutional level. If NGOs and government representatives insist on highlighting only the plight of minorities from religious groups that they themselves belong to, a genuine right to freedom of religion or belief will inevitably be impeded.

Thirdly, I suggested – as I have before – there is a need for a better mainstreaming the right to freedom of religion or belief, and called on the bigger NGOs to work on the right more explicitly. At the moment this right is too often controversial, even potentially incendiary to talk about. This has to change.

Of course, freedom of expression is not the only right that interlinks intimately with freedom of religion or belief. Much of our advocacy work concentrates on where culture, tradition and FoRB are used to undermine other rights, such as those of women, children or LGBTI people, or those seeking to express their atheism or criticise religious ideas. Indeed, we made two statements at this Council on the horrific results that can come out of tradition, culture or religion being used and sometimes distorted to deny the rights of others; one with regard to child marriage and rape and another on Child sacrifice, LGBTI discrimination, maternal mortality in Uganda.

Tellingly, some countries, such as Libya and Iran took great exception to Dr Shaheed having the audacity to mention in his report how FoRB has been used by some to undermine LGBTI rights and equality. This says a lot about not only our opposing visions of rights, but is also indicative of a concerted effort by member states of the Organisation of Islamic Cooperation (OIC) to obstruct and disable the FoRB mandate by limiting what the Special Rapporteur can discuss in his reports. In an interactive dialogue with the High Commissioner, I made this very point.

The underpinnings of human rights are interconnected and mutually reliant, with freedom of thought as a foundational right from which all others emanate. One of our aims during this session of the Human Rights Council (and one of our aims more generally at the IHEU) has been to emphasise how FoRB relates to other rights and to push back on the attempts by many governments – and here I include the new US administration and fellow populists – to orphan it, monopolise it, and successfully distort it, in order to gain privilege for those in power and the majority and to take away the rights of others.