At UN, Humanists commend Iceland on abolition of blasphemy law

The International Humanist and Ethical Union (IHEU) today, in cooperation with member organisation, Sidmennt (the Icelandic Ethical Humanist Association) and partner, European Humanist Federation, praised Iceland for having abolished its blasphemy law last year and for providing an example of good practice to other states.

During a UN human rights review – “Universal Period Review” (UPR) – of Iceland at the Human Rights Council, the coalition emphasised the importance of this move, both for Icelandic citizens, and as part of a path to better upholding the international human rights framework. What was also noted in the statement was the co-operation between religious and non-religious groups in advocating for the anti-blasphemy law repeal.

It should be noted that in its review however, Iceland rejected a recommendation by Ghana to also decriminalize defamation within its civil code in accordance with international standards.

During the statement, Elizabeth O’Casey, IHEU director of advocacy, reminded the Council that, “Blasphemy laws protect ideas, not people and in so doing threaten the very underpinnings of the human rights framework.” 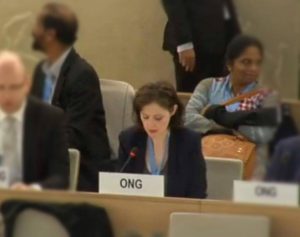 IHEU director of advocacy, Elizabeth O’Casey, delivering her statement at the UN

She also called on Iceland to establish an independent national human rights institution, in “full compliance with the Paris principles relating to the status of national institutions,” and to use the expertise, experience and network of the Icelandic Human Rights Center in the process, of which Sidmennt is a member.

Of Iceland’s abolition of its blasphemy law, Bjarni Jónsson, managing director of Sidmennt said, “It represents a major step towards strengthening people’s freedom of expression. The law was certainly not widely used but there were a few instances when it was used in the country – just as similar laws have been used in other parts of Europe.

“It should be possible for people to criticize religious views in the same way as other ideas without running the risk of being prosecuted, because it is a vital part of democratic social dialogue. Substantial consensus was reached in the Icelandic parliament for abolishing the law as it was viewed as focusing on the fundamental human rights of all.

He also said of highlighting this move at the Human Rights Council was important, so as to “draw attention to the necessity that everyone has the right to express themselves regardless of where they live.”

“All around the world, people are being persecuted and killed for mocking or criticizing religions or religious beliefs. It is therefore of crucial importance that European countries set a good example/take the lead and get rid of their national blasphemy provisions. Because even inactive or unused, they still lend legitimacy to much more severe and actively-used blasphemy laws in other countries. And because recent news in Denmark has shown that they can actually be reactivated by those who argue that there is something inherently wrong with criticism of, or satire about, religion.”

This statement is joined by our member organisation, Sidmennt (the Icelandic Ethical Humanist Association) and partner, the European Humanist Federation.

We would like to warmly welcome, since its last review, Iceland’s introduction of a bill removing the anti-blasphemy provision of its Criminal Code, as agreed by the Icelandic parliament on 2 August 2015.

We also note the extensive support for the bill amongst the various organizations consulted by the parliament, including our campaign partners Sidmennt, and the bishop of Iceland, the Icelandic priesthood, the Association of Publishers, and PEN Iceland.

In accordance with recommendations by UN Special Rapporteurs on Freedom of Religion or Belief and on Freedom of Expression, as well as General Comment 22 of the Human Rights Committee and the Council of Europe (Venice Commission), Iceland has taken an important step in guaranteeing the human right to freedom of religion or belief and freedom of expression for its citizens and in providing an example of good practice we urge other states (which make up a quarter of UN members) to replicate.

Blasphemy laws protect ideas, not people and in so doing threaten the very underpinnings of the human rights framework.

We would also like to encourage, in line with France, Mongolia and Sudan’s recommendations, the establishing of an independent national human rights institution, in full compliance with the Paris principles relating to the status of national institutions. We highlight the recommendations of the OSCE/ODIHR issued on 6 February on the creation of such an institution and we invite Iceland to use the expertise, experience and network of the Icelandic Human Rights Center in the process.