A student who referred to himself as  “The Humanist” has been murdered today by dozens of fellow students, after a “blasphemy” accusation. 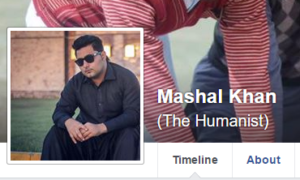 Detail from the personal Facebook profile of Mashal Khan

Mashal Khan was a student at Abdul Wali Khan University in Khyber Pakhtunkhwa province, Pakistan, studying under the Journalism and Mass Communication department.

According to Pakistani media, a large group of students were involved in the attack today after Khan was accused of posting “blasphemous” content online.

Khan was reportedly shot in the head and then beaten with sticks. There is video footage on social media showing his lifeless body being attacked. (An example here – warning: this graphic. Another clip with some graphic details obscured is available via Dawn.com.)

Police are said to have been present during the attack, and had been on alert specifically because of the “blasphemy” accusation. However, a police spokesperson said there were too many attackers for them to intervene! Between 15 and 35 students have been arrested.

Khan called himself “The Humanist” on his Facebook page. Several ‘liberals’ and atheists have been arrested or “disappeared” since the start of the year in Pakistan, during a period of widespread public hysteria about “blasphemous” content, and a High Court judge orchestrating an crackdown against “blasphemy” on social media. 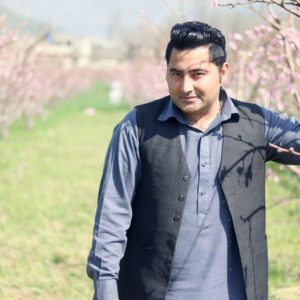 On his social media, Khan appears to be post routinely against discrimination and in favour of human dignity. “Hide History and Hate Hindus. This is what we are taught in Schools… #Pathetic”, he wrote. “If you are black or you are brown or you are gay or you are lesbian or you are trans or you are introvert, anyone that is treating you unkindly, it’s only because they are afraid or they have been taught to be afraid of how important you are. Because being different means you make a difference. So f*** em…”

A spokesperson for Atheist and Agnostic Alliance Pakistan (AAAP) said:

“We are already extremely worried about recently arrested atheists, Ayaz Nizami and Rana Nouman, and the murder of Mashal Khan makes us more concerned than ever. In a country like Pakistan, when the police stand by as mobs of students who are supposed to be interested in ‘higher learning’ commit this atrocity, it is lawless. What if someone try to kill Ayaz Nizami and Rana Nouman in prison? Will the guards stand by?

“There will be no justice while ‘blasphemy’ is a crime and people feel they can get away with murder.”

“This heinous act by university students against one of their own should appall everyone in Pakistan and around the world.

“And this kind of frenzy does not come from nowhere. This vile murder must be a wake-up call to the High Court judges, and to all those government agencies and members of the police and other security services who this year have participated in a campaign of persecution against individuals for so-called ‘blasphemy’. They have been whipping up anti-blasphemy hysteria, when they should be interesting in upholding individual human rights. They have been “disappearing” and harassing and arresting innocent people, when they should have been taking action against those who agitate and send death threats against ‘blasphemers’.

“Pakistan has a social order problem and a blasphemy law problem. These problems will not solved by whipping up a frenzy or by imposing more controls on free expression on religion or non-religion. A tolerant society is not achieved by public officials venting their own intolerance, and facilitating wider public intolerance. It is achieved by upholding freedom of expression, freedom of thought and belief for everyone.

“It is past time to abolish anti-blasphemy laws in Pakistan and everywhere.”

Even under the law, the crime of “blasphemy” carries a death sentence in Pakistan.

The university has been closed until further notice.