In conjunction with a number of human rights NGOs, the International Humanist and Ethical Union (IHEU) has called on UN Human Rights Council members to reject a draft resolution on “Protection of the Family” due to its falling short on human rights grounds. 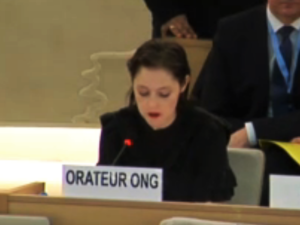 Joined and supported by a range of human rights organisations – including the Allied Rainbows Communities (ARC) International, Association for Women’s Rights in Development (AWID), Center for Reproductive Rights, COC-Nederland, HelpAge International, International Commission of Jurists, International Lesbian, Gay, Bisexual, Trans and Intersex Association (ILGA), and the Sexual Rights Initiative – the IHEU highlighted concerns about the resolution being tabled by Egypt and Russia on Protection of the Family.

The draft resolution comes as one in a series of annual resolutions on Protection of the Family, which – as we have reported before – seeks to “subvert the universality of international human rights; stifle diversity and autonomy; and to shift rights protections away from family members into the institution of ‘the family.’”

The specific draft for the current Council session concentrates on the role of the family in promoting the human rights of older people. However, as the coalition of concerned NGOs pointed out, the draft text “reinforces ageist stereotypes, fails to adequately recognise older persons as individual rights holders and falls far short of States’ obligations to respect, protect and fulfil their rights.”

The IHEU delivered the statement during the Council’s general debate on Follow-up and implementation of the Vienna Declaration and Programme of Action, and called for the states sponsoring the resolution – Bangladesh, Belarus, China, Côte d’Ivoire, Egypt, El Salvador, Mauritania, Morocco, Qatar, Russian Federation, Saudi Arabia, Tunisia, Uganda – to withdraw it; or failing that for members of the Human Rights Council to vote against it.

The statement as delivered by O’Casey follows in full below:

Together with NGOs working on the rights of older persons, we highlight that this resolution reinforces ageist stereotypes, fails to adequately recognize older persons as individual rights holders and falls far short of States’ obligations to respect, protect and fulfil their rights. We reject its limited focus on ‘protection and assistance’ and failure to reflect research showing that the family is the primary site of violence against older persons. [We also note that the resolution ignores the work of the Open-ended Working Group on Ageing and ignores the conclusions of the Independent Expert on the enjoyment of all human rights by older persons.]

This resolution is one of a series of Protection of the Family resolutions that aim to subvert the universality of international human rights; stifle diversity and autonomy; and to shift rights protections away from family members, including older persons, into the institution of ‘the family’. We are concerned that the resolution attempts to instrumentalize older persons and their rights towards these ends.

We are also concerned by the resolution’s failure to recognize that various forms of family exist everywhere, and its stating that “the family plays a crucial role in the preservation of cultural identity, traditions, morals, heritage and the values system of society,” without recognising that families can perpetuate discriminatory and harmful values and traditions, particularly against older women. Culture and tradition are not static or homogeneous; we all have equal human rights to participate in and create culture. [When powerful institutions attempt to claim ownership over, or enforce ‘authentic’ interpretations of culture, tradition, or values, individuals – particularly those who are marginalized or vulnerable – are denied their fundamental rights.]

For these reasons, we do not believe this draft resolution is in line with human rights principles and standards and therefore call on the Core Group to withdraw it or for members of the Human Rights Council to amend or vote against it.

Association for Women’s Rights in Development