Humanists and religious groups have come together under the auspices of the United Nations, to launch a new initiative aimed at fighting discrimination and upholding ‘freedom of religion or belief’ for all.

The Office of the United Nations High Commissioner for Human Rights (OHCHR), in cooperation with civil society groups – including the International Humanist and Ethical Union (IHEU) – have launched the human rights initiative Faith for Rights.

Civil society representatives from a wide range of faith-based backgrounds, UN experts (including the Special Rapporteur on Freedom of Religion or Belief, and on Summary or Arbitrary Executions), academics, and the IHEU, gathered for two days of meetings in Beirut, Lebanon, to agree on a declaration and commitments aimed at countering “discrimination and religious-based violence through a shared objective to promote human rights and to uphold the freedom of religion or belief.”

The Faith for Rights initiative seeks to appeal to those with influence within religious communities to help ensure that they speak out against human rights abuses, and resist any measures that use religion to justify extremism or actions undermining human rights. It urges religious representatives to put in place positive measures to counter discriminatory or hateful speech and to promote human rights.

The work builds on the OHCHR-led 2012 Rabat Plan of Action on the prohibition of incitement (PDF), which had clarified state obligations to prohibit incitement to hatred and the role of religious leaders in speaking out against violence and extremism and provided coherent protection for the rights to freedom of expression and freedom of religion or belief. 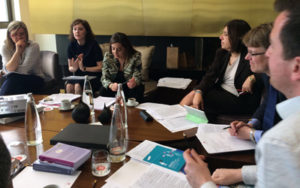 IHEU director of advocacy, Elizabeth O’Casey, who participated in the meeting, said, “I am very grateful to the OHCHR for initiating this process as part of developing the work of the invaluable Rabat Plan of Action.”

“It’s key that we recognise the power and influence of those perceived as leaders within religious and faith-based communities and to engage with them in how better to counteract the instrumentalisation of religion for malicious or abusive ends.

“I am very pleased that, in the spirit Rabat, the Beirut Commitments emphasise counter-speech as a key means to combating extremism and violence rather than resorting to prohibition. It’s helpful to have commitments that speak to individual and collective responsibility in countering hate through positive measures. I was delighted to have been representing the humanist value system and voice to that end in Beirut.”

Faith for Rights includes the Beirut Declaration (PDF), which expands responsibilities around the prohibition of incitement to hatred with specific reference to faith leaders. It calls on believers “of all faiths and none” to work together in defending fundamental rights against discrimination and violence.

Linked to the Declaration are 18 Faith for Rights commitments (pdf) to uphold human rights, including pledges to avoid invoking “State religion” in order to justify discrimination against any individual or group, to ensure gender equality and minority rights, to refrain from oppressing critical voices and to engage with children and youth. They also include a “pledge to publicly denounce all instances of advocacy of hatred that incites to violence, discrimination or hostility, including those that lead to atrocity crimes.” 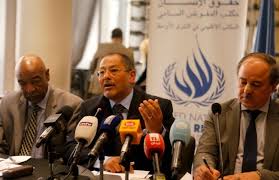 Ibrahim Salama, chief of UN Human Rights Treaties Branch and co-organiser of the Beirut meeting, speaks to press about the declaration and commitments

Ibrahim Salama, chief of the UN Human Rights Treaties Branch, hailed the Beirut Declaration as a rights-based call to people of all faiths around the world to promote peaceful societies based on mutual respect.

“Rather than focusing on theological and doctrinal divides, the Beirut Declaration favours the identification of common ground among all religions and beliefs to uphold the dignity and worth of all human beings,” he said.

By way of introduction to the project, UN High Commissioner for Human Rights, Zeid Ra’ad Al Hussein, pointed out that the UN Charter speaks of the world’s “faith in fundamental human rights,” and that, “Faith for rights” should  “enhance the freedom of religion or belief, which is integral to the universal and interdependent freedoms that my Office upholds. I very much hope we can work together to promote this and all other human rights, and to combat violations.

“Hatred, discrimination, oppression, injustice, marginalisation and extreme poverty: these are drivers of conflict, destruction and misery. All have common roots. The absence of justice. The absence of empathy and solidarity, which impel true care for all our fellow human beings.

“They also have common solutions: respect for the dignity, equality, and human rights of all.”