Refugees in Europe are being hampered by new rules that delay processing and keep families apart. 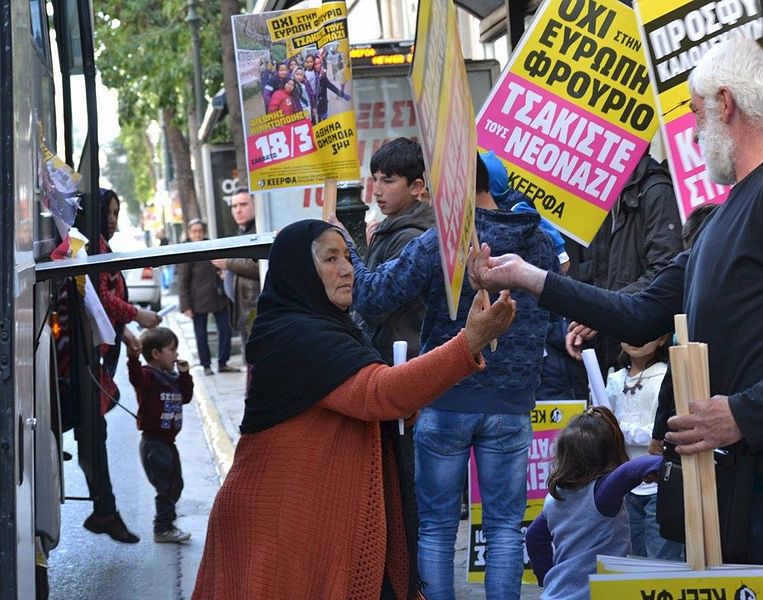 Afghan migrants prepare for a protest in Greece

Amid the wider mass human migration events currently taking place across several large areas of the world, tens of thousands of refugees have traveled to Greece. A significant number of them are entitled to family reunification in other member-states under the Dublin III Regulation. Many have family in Germany.

However, Germany recently asked the Greek authorities to limit the number of asylum-seekers transferred to Germany per month, at the same time offering an informal extension of the deadline for transfers provided by the Regulation. This has resulted to delays in transfers and more suffering to refugee families, many of whom have waited long periods to be reunited.

Civil society organizations including the International Humanist and Ethical Union (IHEU) have published an open letter protesting this practice as undermining EU law, and calls for greater observance of the right to family life.

The open letter follows in full below.

The undersigned organizations would like to express our serious concerns on a de facto violation of the right for family reunification and breach of relevant provisions stipulated in the EU Regulation 604/2013 (Dublin III Regulation), regarding asylum seekers’ transfers from Greece to Germany under family reunification procedure. We refer specifically to a practice recorded during the last months according to which, asylum seekers entitled to be transferred to Germany under the relevant provisions of the Dublin III Regulation, are “blocked’ in Greece for periods exceeding the deadlines provided by the above mentioned provisions, for reasons related to supplementary terms of a maximum number of transfers per month. This situation is jeopardizing the whole process and undermines the right of asylum seekers to family reunification, as provided by Dublin III Regulation and violates further their right to family life as stipulated in article 8 of the European Convention for Human Rights as well as article 7 of the EU Charter of Fundamental Rights.

In particular, during the last months we have become aware of many cases of asylum seekers whose taking charge requests have been accepted by Germany though their transfer to Germany has not taken place, although the six-month deadline (art. 29) has expired. We have also been aware of many other cases for which the above deadline is to expire soon, but nevertheless no arrangements have been made for their transfer.

The Greek Asylum Service in its written answer (attached to the present document in Greek) to one of the undersigned organizations, AITIMA, regarding the problem that has arisen, expressed the following position:

Subject: Scheduling of asylum seekers’ transfers to Germany according to the EU Regulation 604/2013 EU.

In answer to your question regarding the transfer of asylum seekers to Germany we would like to inform you as follows:

The German Dublin Unit requested from our department the transfer of asylum seek-ers in controlled numbers per month without consideration to the six-month deadline for the completion of the transfer as provided by art. 29 of the EU Regulation 604/2013.

For the cases for which the six-month deadline has elapsed or is about to elapse, we have received an extension of the deadline for their transfer according to an under-standing with the German Dublin Unit (BAMF).

The completion of the transfers you mention in your letters will be scheduled in cooperation with the German Authorities from July 2017 onwards.

The above answer of the Greek Asylum Service confirms that an arrangement has been made between the competent authorities of the two member states, Germany and Greece, which exact content is not known.

We would like to note that according to the existing data less than 100 asylum seekers are transferred per month, while currently the six-month deadline expires for over 300 asylum seekers per month, which means that if this arrangement continues, the delays in transfers will lead to a significant postponement  amounting to a de facto denial to family reunification, to integration to protection of a big number of asylum seekers-most of them vulnerable as many unaccompanied minors, single mothers with children, ill persons etc..

This development, on one hand, aggravates the existing problems regarding asylum seekers’ living conditions in Greece and on the other hand,  prolonging the partition of families which has serious effects in the family members’ well-being, in particular the most affected  being the most vulnerable, as  unaccompanied minors, single mothers with children, ill persons who are suffering and at risk of being deprived of their family for long-lasting and in practice unknown period of time, while being entitled to join them. Within this context, it has to be also taken into account the long-lasting period of registration of the asylum applications (ranged from 8 months to over one year) that most of the asylum seekers, currently  under family reunification procedure, have been subjected to in Greece, after the closing of the so called Balkan route took place.

Furthermore, we would like to point out that the above arrangement as presented in the document of the Asylum Service, apart from serious breach of the provided right for family reunification, is in clear violation of specific provisions of the EU Regulation 604/2013 and especially of article 29, providing for:

Moreover, according to article 36:

1. Member States may, on a bilateral basis, establish administrative arrangements between themselves concerning the practical details of the implementation of this Regulation, in order to facilitate its application and increase its effectiveness. Such arrangements may relate to:

(a) exchanges of liaison officers;

(b) simplification of the procedures and shortening of the time limits relating to transmission and the examination of requests to take charge of or take back applicants.

3. Before concluding or amending any arrangement referred to in paragraph 1(b), the Member States concerned shall consult the Commission as to the compatibility of the arrangement with this Regulation.

5. Member States shall notify the Commission of all arrangements referred to in paragraph 1, and of any denunciation thereof, or amendment thereto.”

It is obvious that the above mentioned arrangement agreed between Germany and Greece cannot be considered as falling into the provisions of the above article, as administrative arrangements, may concern the practical details of the implementation of the Regulation, in order to facilitate its application and increase its effectiveness and may relate to simplification of the procedures and shortening of the time limits, not the opposite. In any case, arrangements cannot reduce rights nor set extra terms-such as numbers or quotas- to specific provisions set by an EU Regulation. Therefore the above mentioned arrangement is in violation of this article as well.

The arrangement agreed between Germany and Greece on the implementation of family reunification of asylum seekers introducing quantitive criteria (maximum number per month) is in flagrant violation of International, EU and national legislation establishing the principle of family unity and the best interest of the child and in particular article 8 of the European Convention for Human Rights which protects the right to family life, article 10 of the Convention on the Rights of the Child as well as article 7 of the EU Charter of Fundamental Rights.

For these reasons we call you to take all the necessary measures in order to stop this unlawful practice, as the arrangement agreed between Germany and Greece is, which hinder core principles and rights as family unity, the best interest of the child, protection and integration of asylum seekers.