IHEU deplores backlash and “hunt” against atheists in Malaysia

Atheists who were photographed celebrating at a recent meeting in Kuala Lumpur are being “hunted” by the authorities, and receiving death threats. 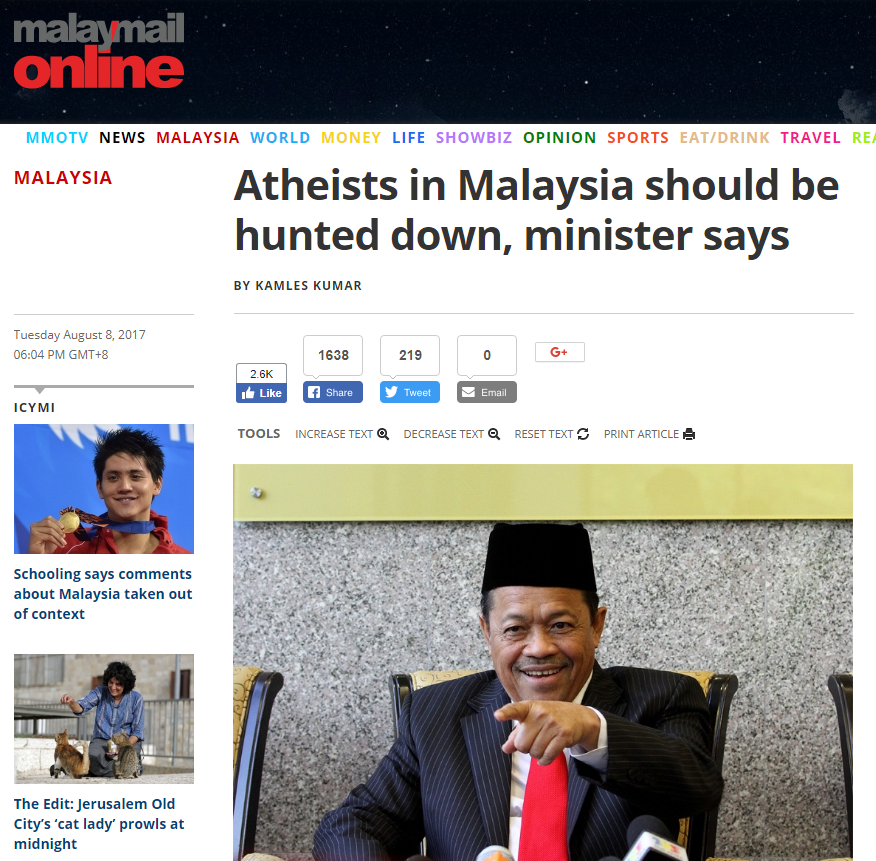 Malaysia is investigating a local atheist meetup group, a government minister said yesterday (7 August 2017) after a picture from their meeting held by the group in Kuala Lumpur went viral, with antagonistic social media users angry that so-called “apostates” from Islam may be involved in the group.

The Kuala Lumpur chapter of Atheist Republic, a Canada-based organization, posted a picture of the group’s members attending a gathering last week, which is said to have sparked uproar among some Muslims and prompted threats of death and violence against individual members of the group on social media. (The IHEU is not sharing or linking the image at this time.)

Atheist Republic, an online group whose Facebook page has more than 1.7 million followers around the world, is associated with local “consulate” groups holding meetups for members in larger cities around the world.

Malaysia’s deputy minister in charge of religious affairs, Asyraf Wajdi Dusuki, said on Monday he had instructed the Federal Territories Islamic Religious Department to investigate the local Atheist Republic chapter to see if any Muslims were involved: “We need to determine whether any Muslims attended the gathering, and whether they are involved in spreading such views, which can jeopardize the aqidah (faith) of Muslims,” he is reported to have said.

Mr. Wajdi said that the government would seek to find out whether any Muslims were in attendance at the atheist meeting (sic) and if they have been involved in spreading atheism: “We need to use the soft approach [with apostates],” he added. “Perhaps they are ignorant of the true Islam, so we need to engage them and educate them on the right teachings.” He also added that ex-Muslims found to be part of the atheist gathering would be given counselling, while anyone found spreading atheist ideas could be prosecuted.

On Tuesday another Minister, Datuk Seri Shahidan Kassim, threatened a manhunt. “The (Federal Constitution) does not mention atheists. It goes against the Constitution and human rights… I suggest that we hunt them down vehemently and we ask for help to identify these groups,” he said in a press conference at Parliament on the 8 August 2017.

“We deplore this senseless police investigation. And we condemn in the strongest terms the extremely dangerous, provocative language coming from government officials.

The concept of ‘apostasy’ as a moral or criminal injunction is a pernicious, self-interested norm of religion, obviously designed to dissuade people from questioning and revising beliefs. It contradicts the basic human rights of all to freedom of thought and belief, and it has absolutely no priority over the individual freedom to hold non-religious views, or to define ourselves as atheists or anything else.

The Minister who says atheism goes against human rights is absolutely wrong. Non-religious people have freedom of thought, freedom of expression and freedom of association, just like the religious, and it is his talk of “hunting” human beings simply for joining together in celebration of their views and values which represents a grave human rights violation.”

Atheist Republic’s founder, Armin Navabi, said the group’s gatherings caused no harm to the public and were not considered a threat in other countries. “They (atheists) are treated like criminals. They are just hanging out and meeting other atheists. Who are they harming?!” he said in a post on his Facebook account.

The IHEU Freedom of Thought Report entry for Malaysia has for several years drawn attention to the possibility of “apostates” facing legal consequences. Malaysian states which have state-wide laws on Islamic affairs do not allow Muslims to formally renounce Islam, who may receive sentences of counselling, fines or jail. Ethnic Malays in particular are subjected to strict state controls over an enforced, homogenous religious identity.

The state governments of Kelantan and Terengganu passed laws in 1993 and 2002, respectively, making apostasy a capital crime. This is despite the fact that apostasy is not a federal crime in Malaysia, a multi-ethnic and multi-religious country, and the states laws may in fact contradict federal law – as well of course as violating the rights to freedom of belief and freedom of expression. The Report does not record any recent convictions or death sentences in Malaysia.