The IHEU General Assembly 2017 took place on Sunday (6 August), as part of a weekend of events hosted in London, UK by Humanists UK.

The programme of events began on Friday with IHEU Regional Networking workshops, as well as the General Assembly of our youth section, IHEYO, and a Humanist Professionals conference, discussing humanist chaplaincy and pastoral support, including the provision of support for so-called ‘apostates’.

On Saturday, Humanists UK hosted a conference on “Populism, extremism, and threats to humanism”. Among a host of experts on modern political movements, Elizabeth O’Casey (IHEU Director of Advocacy) discussed the overlap between populism and religious authoritarianism, and Bob Churchill (IHEU Director of Communications and Campaigns) outlined some beneficial features of work designed to change the world. 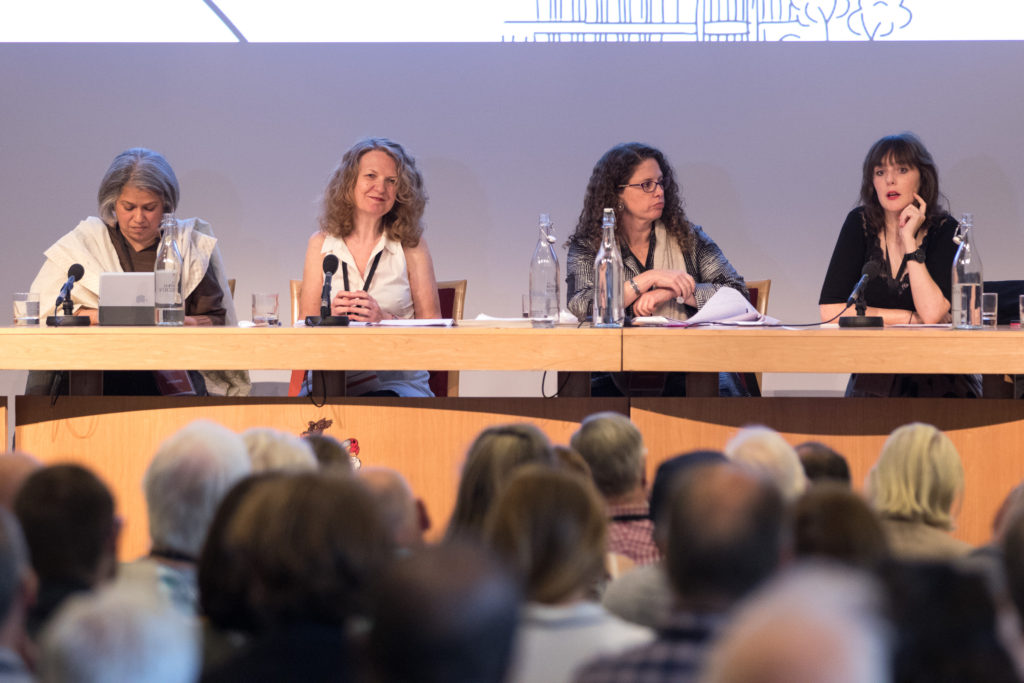 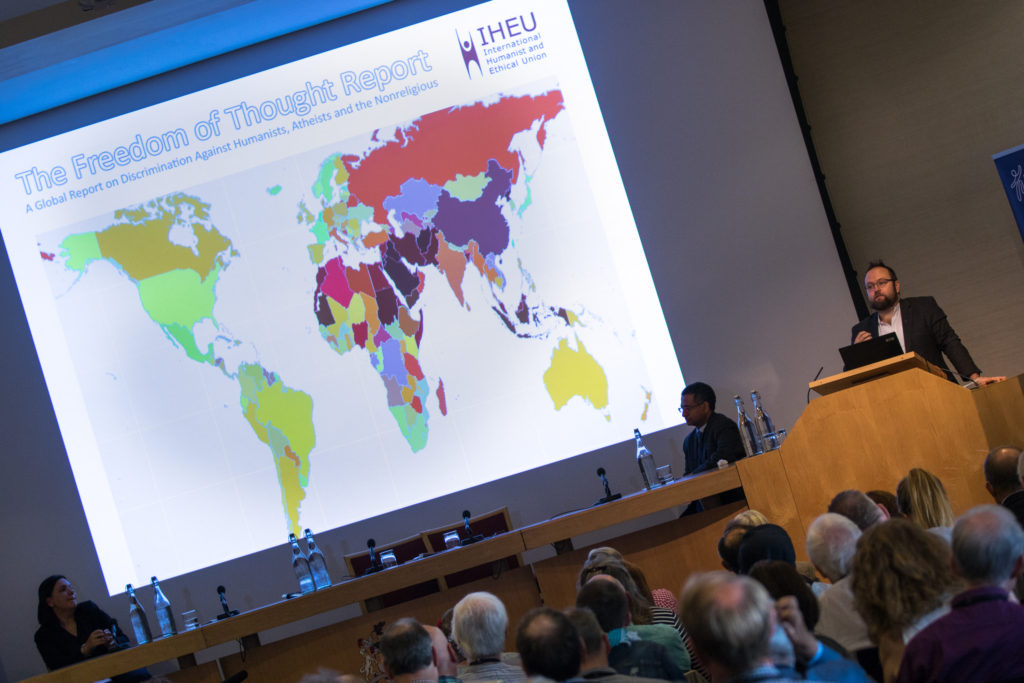 More on the day conference and other events is available via humanism.org.uk.

On Sunday, Member Organizations of the IHEU came together for the annual IHEU General Assembly, the democratic governing body of the IHEU.

As part of his welcoming remarks to representatives at the meeting, IHEU president Andrew Copson said:

Obviously we have much business to do today, and in addition we will hear also about the work of the IHEU in the past year. We’ve appointed a new Chief Executive who has hit the ground running at a really extraordinary time for the organization, where we now have a new Growth and Development Officer delivering a new Growth and Development programme, which I’m pleased to see is already bearing fruit. We will hear about the latest evolution of the IHEU Freedom of Thought Report. And for the first time we have a full-time Director of Advocacy bringing us up to four full-time staff – that’s up from just two staff two years ago.

I believe that the work our staff do is extraordinary – especially when you think about the level of resources and the tiny number of staff we have. As a Board we’re building more and more into our long-term strategic plans about our sustainability and growth.

I believe some of our best work is work we do in cooperation with you, our Member Organizations, when we are able to uplift or inform each other – that goes in both directions. Many of our plans incorporate this interlinking with Members, and I think this cooperative stance will be a recurring theme of our discussions today.

I thank you all for coming here today, to support and engage with our work. You have come here today and a really difficult time for internationalism, for human rights, for the values of humanism. So thank you for not giving up! Thank you for your own efforts and through your membership or your cooperation for supporting the work of the IHEU. Please give yourselves a very generous round of applause!

In an invited keynote speech, Dr Ahmed Shaheed (UN Special Rapporteur on Freedom of Religion or Belief) stressed that human rights violations against atheists and humanists in the past few years were of a particularly “brutal” nature, and that the kind of acts of violence recorded against the non-religious just for being non-religious and voicing their views was not found against other communities in the same proportionality.

“There is I think, thanks to the reports that you publish, growing awareness of the plight of humanists around the world. … in my observations, humanists – when they are attacked – they are attacked far more viciously and brutally than I think in other cases.”

“Build those bonds of solidarity and inclusion!”
Important words by @ahmedshaheed at @IHEU‘s general assembly.#Humanism2017

In elections to the IHEU Board, Anne-France Ketelaer (Belgium) was returned as Vice-President. David Pineda (Guatemala), appointed last year as Board member for Latin America, was elected to the same position. With two further general Board places open, the General Assembly elected two new Board members: Rebecca Hale (United States) and Gulalai Ismail (Pakistan). Rebecca Hale has been involved in the governance of IHEU Member Organization the American Humanist Association since 2005 and served as president since 2013. Gulalai Ismail is a human rights campaigner, co-founder of IHEU Member Organization Aware Girls, and received the International Humanist Award from IHEU in 2014. There are nine current members of the Board.

A resolution on changing the name of the IHEU was passed by the General Assembly with an amendment, mandating the Board to oversee a transition to a revised identity for the organization in the future…

There were two awards made at this year’s General Assembly. A special, posthumous Distinguished Services to Anti-Superstition Award was made to rationalist campaigner Narendra Dabholkar, who was killed in 2013, apparently in connection with his work against fraudsters and championing the anti-superstition law which was enacted days after his murder. Making the award, Andrew Copson said: “He once protested, in the face of the threats he was receiving against his life: “I’m fighting within the framework of the Indian constitution and it is not against anyone, but for everyone.” It is this universalism, this great humanism, which his attackers, and his opponents generally, obviously fail to comprehend — and for which he must be remembered.”

The 2017 Distinguished Services to Humanism Award was made to humanist activist Leo Igwe, long-time campaigner against violence and abuse linked to witchcraft beliefs and accusations in his home country of Nigeria. Collecting the award in person, which he dedicated “to all humanists at risk around the globe”, Leo received a standing ovation and tremendous applause. 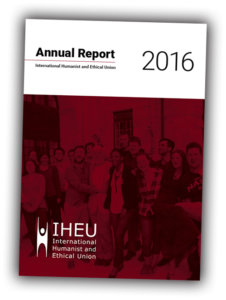 Work of the IHEU

Bob Churchill highlighted the successful move of the Freedom of Thought Report into its new all-online format. And Elizabeth O’Casey spoke about the expansion of advocacy work under her new full-time role. 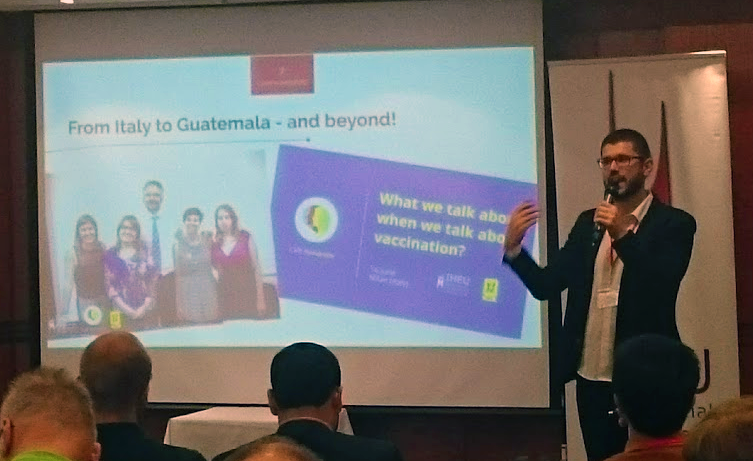 Huge thanks to all staff, Board members outgoing and incoming, delegates from Member Organizations, Individual Supporters observing the meeting, and to our volunteers for helping to keep things running!

Big thanks to our volunteers Isabel and Dharini for registering ALL the humanists for our General Assembly this morning. #humanism2017 pic.twitter.com/Du3HShCjVg