Last week in Geneva, humanists and freethinkers joined members of civil society, academics, and a range of experts at a ground-breaking high-level UN workshop on witchcraft and human rights, highlighting the violence and human rights abuses that happen across the world because of witchcraft related beliefs. 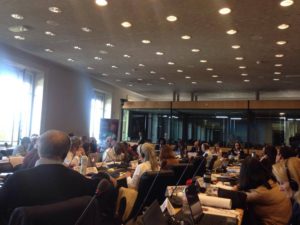 Attendants at the UN workshop on witchcraft and human rights

As we have been reporting for a number of years, witchcraft related beliefs and practices have resulted in serious violations of human rights in many countries. Violations include: beatings; banishment; cutting of body parts and amputation of limbs; torture; and murder. Despite the seriousness of these human rights abuses, there is often no robust state led response, and often judicial systems do not act to prevent, investigate or prosecute human rights abuses linked to beliefs in witchcraft.

As a preliminary step in encouraging international action on the issue, the Witchcraft and Human Rights Information Network (WHRIN) last week organised a workshop in Geneva that brought together UN Experts, academics and members of civil society, including the International Humanist and Ethical Union (IHEU), to discuss the violence associated with such beliefs and practices and groups that are particularly vulnerable. 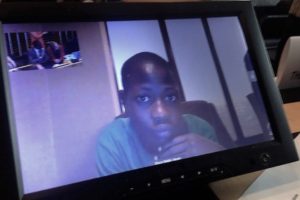 Described by the Deputy High Commissioner for Human Rights, Kate Gilmore, as “ground-breaking,” it was the first-ever workshop “to directly consider the intersections between witchcraft and human rights and do so in an in-depth manner at the UN or international level.”

It aimed to enable greater understanding of witchcraft related beliefs and practices, and their impact on the enjoyment of human rights, with a view to developing solutions to prevent further abuses from taking place.

The workshop was convened over two days alongside that of the UN Human Rights Council. IHEU director of advocacy, Elizabeth O’Casey spoke on one panel, and reminded the participants that human rights are universal, regardless of the particular beliefs, culture, religion or tradition of the countries concerned. 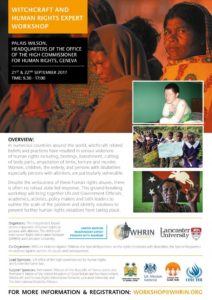 Well-known anti-witchcraft activist and humanist, Leo Igwe (of the Nigerian Humanist Movement), who has campaigned to rescue children branded as witches in Nigeria for many years, spoke on another panel. He urged that the international community to expect and achieve the same human rights standards in Africa for its people,  as achieved and expected in Europe and elsewhere.

The workshop heard from those working on the ground of the horrific violence people have suffered due to witchcraft accusations, stigma and ritual killings, whilst also identifying good practices in combating the phenomena.

An outcome document containing the substantive discussion as well as a synthesis of recommendations will be produced and ready for distribution before the end of the year.

The exact number of victims of abuse relating to belief in witchcraft is unknown and is widely believed to be under reported. At the very least, it is believed that there are thousands of cases of people accused of witchcraft each year globally, often with fatal consequences, and others are mutilated and killed for witchcraft-related rituals.

In 2013, an international consortium of human rights groups, children’s charities and experts, urged then-president of the USA, Barack Obama, to speak out on the widespread human rights abuses that take place due to the belief in ‘witchcraft’ during his tour of the continent.