We stand with atheists in Malaysia, says IHEU at UN

At the UN, the International Humanist and Ethical Union (IHEU) and Atheist Republic have highlighted the grave situation for atheists in Malaysia, where government ministers are essentially calling for a witch hunt against members of the Kuala Lumpur chapter of Atheist Republic.

The statement, supported by Atheist Republic, was delivered by IHEU director of advocacy, Elizabeth O’Casey, to the UN Human Rights Council yesterday. The Human Rights Council is the body responsible for promoting an protecting human rights around the world. It was the first IHEU statement to the 36th session of the Council. 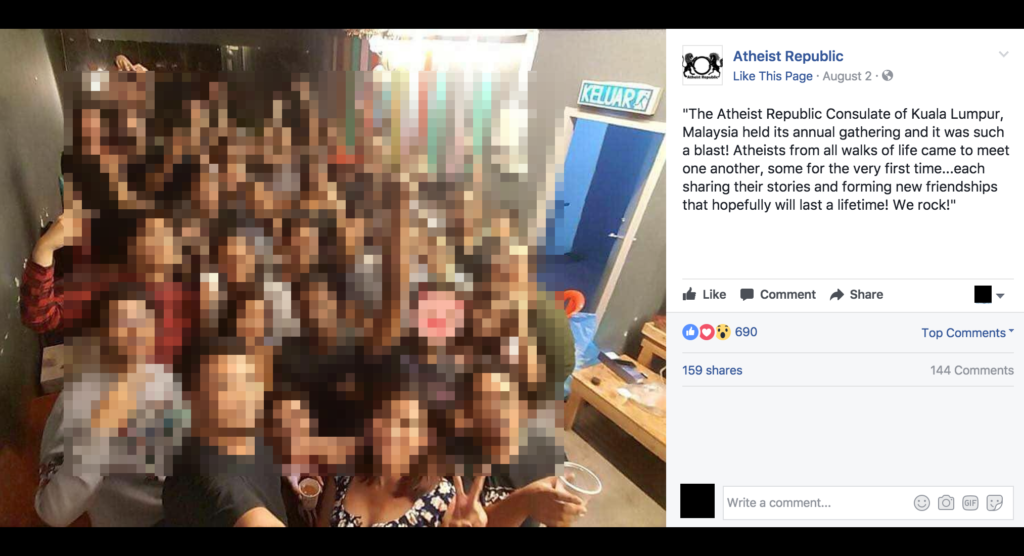 This photograph of an atheist meet-up group in Kuala Lumpur went viral, prompting death threats from members of the public and threats of prosecution by police and officials. (Faces have been obscured in this image to protect those under threat.) IHEU consistently defends the right of non-religious people to peacefully assemble and associate.

Last month, a Malaysian government minister said authorities would investigate a local atheist meet-up group after a picture from their meeting in Kuala Lumpur went viral. The groups also received threats from antagonistic social media users, angry that so-called “apostates” from Islam may be involved in the group.

Describing the government fueled hate against atheists, secularists and humanists as a “witch hunt”, O’Casey also referenced Prime Minister Razak’s comments a few years ago when he described humanism and secularism as threats to Islam and the state, and labeled human rights based on secularism, humanism and liberalism as “deviationist”.

In response, O’Casey, said “Advocating secularism means supporting a system where freedom of religion or belief and expression for all is respected. Humanists defend human rights and promote values grounded in a concern for all people over that of ideology or dogma. If doing these things is “deviant” then we’re proud to be “deviationists” and stand by all those in Malaysia who are doing the same thing.”

Armin Navabi, the founder of Atheist Republic, commented, “Atheists are one of the world’s most persecuted minorities, and yet they are also one of the least defended. Atheists need to know that their countries care for and welcome them and that they are not ignored by the international community when they are being hunted down by their governments.

“Our atheist members in Malaysia are very grateful for the attention the International Humanist and Ethical Union has brought this issue.”

The UN Special Rapporteur in the field of Cultural Rights, Dr Karima Bennoune, recently made an official visit to Malaysia. During her preliminary observations after her trip, Dr Bennoune condemned the reported statement by the deputy minister charged with Religious Affairs that those involved in a recent gathering of atheists should be investigated.

She also commented that, “the rule that those choosing to leave Islam must undergo counselling and must obtain a certificate from a Syariah court to do so is demeaning and a limit on their right to take part in cultural life without discrimination.” Dr Bennoune expressed sadness that  some of the lawyers representing clients in such cases are reportedly shunned, and said, “Non-religious persons must also be recognized, alongside the wide variety of religious believers as part of the fabric of a diverse and tolerant society.”

O’Casey’s statement to the Human Rights Council follow in full below:

This statement is supported by Atheist Republic.

Last month, a minister in the Malaysian government, Datuk Seri Shahidan Kassim, said the following: “It goes against the Constitution and human rights… I suggest that we hunt them down vehemently and we ask for help to identify these groups.”

The minister was talking about Malaysian citizens who came together as part of the Kuala Lumpur chapter of Atheist Republic and posted a photo of themselves on social media.

The idea that atheists should be “hunted down” by the authorities with the help of the public is essentially a mandate for a witch hunt, with all the human rights implications and risks to individual safety and security that this implies.

Another minister, Asyraf Wajdi Dusuki, instructed the Federal Territories Islamic Religious Department to investigate the group to see if any Muslims were involved; he said that ex-Muslims found to be part of the gathering would be counselled, and anyone found spreading atheist ideas potentially prosecuted.

This type of government language of persecution against the non-religious in the country is not new; in 2014, Prime Minister Razak described humanism and secularism as threats to Islam and the state. He said, “They call it human rightism, where the core beliefs are based on humanism and secularism as well as liberalism. It’s deviationist in that it glorifies the desires of man alone and rejects any value system that encompasses religious norms and etiquettes.”

Advocating secularism means supporting a system where freedom of religion or belief and expression for all is respected. Humanists defend human rights and promote values grounded in a concern for all people over that of ideology or dogma. If doing these things is “deviant” then we’re proud to be “deviationists” and stand by all those in Malaysia who are doing the same thing.