In a momentous move on the eve of International Blasphemy Day, the UN Human Rights Council yesterday passed a resolution on the death penalty which calls on any states who have “not yet abolished the death penalty to ensure that it is not imposed as a sanction for specific forms of conduct such as apostasy, blasphemy, adultery and consensual same-sex relations.”

The resolution, which was sponsored by Benin, Belgium, Costa Rica, France, Mexico, Republic of Moldova, Mongolia, and Switzerland, is the first to call specifically for not using the death penalty for offences such as  apostasy, blasphemy, consensual same-sex relations and adultery.

It was adopted by a vote of 27 in favour, 13 against and 7 abstentions and has been warmly welcomed by the International Humanist and Ethical Union (IHEU).

It quotes the foreword to the 2016 edition of the IHEU Freedom of Thought Report, which was written by the UN Special Rapporteur on freedom of religion or belief, noting that “Several States continue to criminalize forms of non-religious beliefs, including 13 States that impose the death penalty for blasphemy or apostasy.”

The report also notes that the imposition of the death penalty for offences relating to consensual homosexual conduct continues to be provided for in the legislation of many States. It says, “the existence of such laws discriminates against the conduct of lesbian, gay, bisexual and transgender persons. Those laws also send a social message. They have an intimidating effect and can create an enabling environment for acts of violence and stigma.” 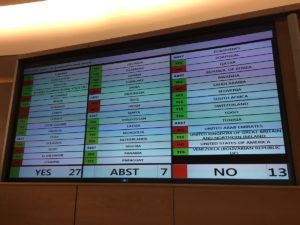 The result of the vote on the resolution at the Council (photo credit: Article 19)

In preparation for the report, the Office of the High Commissioner for Human Rights (OHCHR) hosted an Expert Group Meeting on the death penalty and discrimination earlier this year.

In that meeting as an invited panellist, IHEU director of communications and campaigns, Bob Churchill, raised the issue of the need to recognise and understand the situation of the non-religious as a distinct minority within death penalty work. He highlighted several cases of people accused under ‘blasphemy’ or ‘apostasy’ in countries where those crimes are punishable by death, and where they have been targeted for being non-religious, or at least accused of being non-religious. He argued that the existence of death penalties for these crimes was a prime facie violation of the rights to freedom of thought and expression, and pointed out how the injustices faced by non-religious people tended to be structurally different from some other groups accused under similar laws, and that we must understand this as a prerequisite to fixing it.

In response to the adoption of the resolution yesterday, IHEU director of advocacy, Elizabeth O’Casey, said:

“Whilst of course we are pushing to get rid of any laws criminalising apostasy, blasphemy and same-sex relations in the long term, this is an extremely positive step in that quest and commend the work of the core group behind the resolution in getting it passed.

“It is heartening to see a text being adopted that explicitly focuses on apostasy, blasphemy and same-sex relations as notable areas of discrimination – three key issues of concern for us in our advocacy work – and recognising the disproportionately grave effect the death penalty has within these areas.

“We now have to work to get Council member Saudi Arabia to take note and revoke the death sentence they handed down to Ahmad Al Shamri for blasphemy in 2015. And likewise with Mauritania, where Cheikh Ould Mohammed MKheitir still faces death despite his only crime being to criticise the instrumentalisation of religion to legitimise slavery.”

International Blasphemy Day, 30th September, is an annual day that encourages individuals and groups to openly express criticism of blasphemy laws, religious ideology and dogma. It was founded in 2009 by the Center for Inquiry (an IHEU Member Organization).