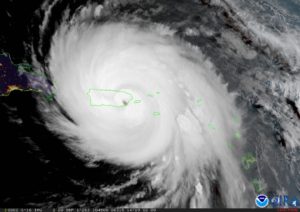 On 7 September Hurricane Irma, a massive tropical cyclone, passed by the northeast coast of the island of Puerto Rico. Most of the island was flooded with heavy rains and hurricane force winds that devastated homes, trees and most of the electrical and water capabilities. Many were left homeless.

Three weeks later, on 30 September, Hurricane Maria, a category 4 cyclone with winds over 150 miles per hour, made landfall on the southeastern part of the island and went across Puerto Rico, exiting over the northwestern side, leaving the entire island devastated, whole neighbourhoods flooded, and dam that is to this day still at risk of failing because of cracks.

A message from Secular Humanists of Puerto Rico

After Hurricane Maria’s landfall, Eva Quiñones, President of HuSe Puerto Rico got in touch with IHEU about the catastrophe: 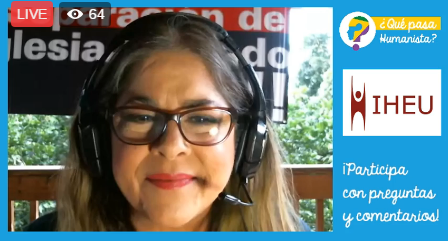 Eva during the first episode of ¿Qué pasa Humanista? back in May 2017

“Many towns could not be reached for days, without any communications to the outside world – or even to the capital city of San Juan, and with a power grid already destroyed by Irma less than 2 weeks before, now it is absolutely destroyed. The island and its frail economy are collapsing under the stresses of massive destruction and lack of supplies.

“Help has come from the United States, as we Puerto Ricans are citizens, but more is needed. Our phone towers have mostly collapsed, and the ones still up are left unusable by lack of electricity, or looting of the diesel or generators used to power them. People died because of Maria, and more people are dying more then a week after the monster storm ravaged us from side to side.

“The situation is desperate and we beg our fellow humanists of the world to aid our little island and to help us come back from this horrible disaster. Our economy was destroyed before this hurricanes, as we had declared bankruptcy some months ago, and creditors are knocking on our door. A catastrophe like Maria makes everything impossibly worse.”

How Humanists are helping

As Eva Quiñones confirmed to us, some Humanist organizations in the US are already doing their best to help people in Puerto Rico. The Humanists of North Central Florida sent a gift card of $2000 to HuSe Puerto Rico to help humanist families in need. Hispanic American Freethinkers are sending to HuSe Puerto Rico specific first aid and emergency items that are now being distributed to the homeless people. But more help is needed.

If you or your group are able to sponsor work or supplies and would like to directly reach HuSE Puerto Rico about what is needed or making a donation, please contact via office@iheu.org.

Eva Quiñones indicated three reliable organizations that are now working on the ground in cooperation with HuSe Puerto Rico.