A government official in Malaysia has, wrongly, repeated claims today that atheism is a “very dangerous” ideology which is prohibited under the constitution and under the statement of “national principles”.

Deputy Minister in the Prime Minister’s Department, Datuk Asyraf Wajdi Dusuki, alleged that the “freedom of religion” under the Constitution does not extend to non-religious views: 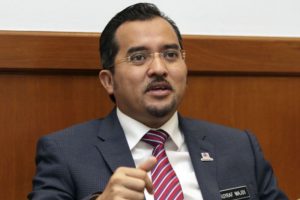 Asyraf Wajdi Dusuki. He thinks having a state religion and a constitutional guarantee of “religious freedom” is somehow a prohibition on atheism

“We have to understand that in the Malaysian context, our Federal Constitution states that the freedom of religion does not mean freedom from any religion because that is unconstitutional.

Asyraf’s remarks today came in response to a question from fellow MP Dr Siti Mariah Mahmud about what steps had been taken to curb atheism among Malaysians, specifically citing the Atheist Republic group which went viral earlier in the year.

In August, members of the group, who posed for innocuous photos at a social event, were subjected to death threats and police investigation.  The same minister who spoke today, Asyraf Wajdi Dusuki, then joined in with the public furore against an atheist meetup group in Kuala Lumpur.  He said at the time that he instructed the Islamic Religious Department to investigate the atheist group because, “We need to determine whether any Muslims attended the gathering, and whether they are involved in spreading such views, which can jeopardize the aqidah (faith) of Muslims.”

He was not the only minister to intervene by maligning or threatening the group. Datuk Seri Shahidan Kassim said at the time: “The (Federal Constitution) does not mention atheists. It goes against the Constitution and human rights… I suggest that we hunt them down vehemently and we ask for help to identify these groups.”

What does the law say?

In fact there is no prohibition against holding atheist views in the constitution. The constitution declares (Article 3) that “Islam is the religion of the Federation; but other religions may be practised in peace and harmony in any part of the Federation.” The constitution also declares (Article 11) that “Every person has the right to profess and practise his religion and, subject to Clause (4), to propagate it.” Clause 4  states that restrictions may be placed on “the propagation of any religious doctrine or belief among persons professing the religion of Islam”, a discriminatory clause which violates the rights to freedom of thought and expression held by others.

There are also no laws specifically against ‘spreading atheism’ as such, but vague threats about using existing laws to prosecute atheists have been made. The deputy minister in charge of Islamic affairs said today that anyone spreading atheism could be prosecuted under both Shariah and civil laws. Aysraf said the Sedition Act could be used against anyone promoting atheism. “For non-Muslims, as we are informed it goes against the laws relating to public order and peace,” he is quoted as saying. “We also have the Sedition Act for any parties that try to spread ideologies and doctrines like atheism which disrupts the sanctity of other religions.”

The state principles of Rukunegara declare five national ambitions and five principles. The first principle is “Belief in God”. The Rukunegara is recited in schools during compulsory assemblies and at state occasions. There is a live debate about whether the Rukunegara should be incorporated as a preamble to the constitution and indeed whether doing so would impinge on the rights of the non-religious.

The International Humanist and Ethical Union (IHEU) protested the threats and abuse directed at Malaysian atheists earlier this year and highlighted the issue at the UN in September.

A statement from the IHEU on today’s remarks follows below:

“Everything about today’s further intervention by government officials is wrong.

It is completely illogical and contrary to international human rights standards to interpret a constitutional guarantee of ‘freedom of religion’ as a ban on holding or expressing non-religious views.

It is wrong to state that atheism is ‘dangerous’. Any ideology might employ almost any belief to terrible ends. But atheism is simply the view that there are no gods. This view is increasingly available around the world and more and more people agree to it. As an idea it can be seen recurring throughout history to many great minds out of many traditions. Most atheists, furthermore, are humanists, insofar as they hold some positive conception of right and wrong, independent of any religion. They think that human societies can be more or less fair and just. They believe that human beings, without any divine command or intervention, can assume personal responsibility for themselves, and that they can make the world a better place, or a worse place. And they would prefer to make it a better place if they can.

Societies do not descend into anarchy or terror because too many people hold this simple view, on the contrary there is plenty of evidence that secularization correlates with development, democracy and peace. Allowing people to hold such such views is not the cause of any necessary harm. Whereas prohibiting such views is to violate individual conscience and free expression, and can only embolden religious extremists, while provoking hatred and violence against the non-religious.

Provisions in the Malaysian constitution against proselytizing to Muslims, and only Muslims, are obviously discriminatory. Furthermore these provisions do not protect Muslims from any real harm. Instead these provisions infantilize Muslims. Such provisions carry the assumption that despite being in a majority in the country and having their religion upheld as the “state religion” it is somehow offensive or harmful for Muslims to hear about alternative views. The extra controls on the beliefs and practices of Islam among ethnic Malays is coercive and authoritarian. Regardless of their own beliefs, they can demand that the government stop treating them like they are so sensitive and easily provoked that they cannot cope with hearing or contemplating any other viewpoints. They can demand the freedom to worship however they want, or not to worship, and to believe as they wish.

We further note that the national principles or state ideology of Rukunegara is not a law and does not – and cannot – bind any individual to belief in God. While the intention behind the Rukunegara is to engender national unity, unity must not be bought at the price of individual conscience. To make “belief in God” a necessary principle only serves to marginalize those who through their own good conscience cannot accept the metaphysical claims of monotheism. Meanwhile, of the ambitions of the Rukunegara — preserving democracy, creating a fair and equitable society, taking a “liberal approach” towards “rich and varied cultural traditions”, and “building a progressive society” — these are all best achieved by permitting individuals their freedom of thought and freedom of expression. While attacking and prosecuting atheists hugely detracts from these aims.

The language and enmity directed at atheists remains of deep concern to the IHEU and our members around the world. Government hostility against the atheist minority in Malaysia must cease.”