A man in the United Kingdom, originally from Pakistan, has had his asylum application rejected on the grounds of how he answered questions about ancient Greek philosophers. 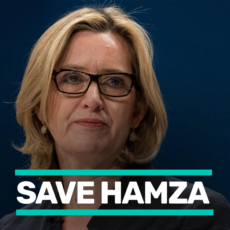 Humanists UK have launched a petition to the UK Home Secretary, Amber Rudd, to “save Hamza’s life”.

The International Humanist and Ethical Union (IHEU) and Humanists UK protested the rejection of Hamza Bin Walayat’s asylum application after seeing a copy of his documentation, which contained the Home Office’s own account of an interview they conducted. The account describes various aspects of the interview which are cited against the applicant:

In a letter of support for Walayat’s case, Bob Churchill, director of communications and campaigns at the International Humanist and Ethical Union (IHEU), disputed the line of questioning by the Home Office:

“We note with dismay some of the points made in the previous rejection letter in Hamza’s case (15 October 2017)… The various semantic confusions as to how non-religious humanism should be talked about with respect to religion are commonplace:

• should we answer “I’m humanist” in response to the question “What is your religion?” – some would do so, some would do so but recognize the strangeness, others would refuse to do so and specify “No, I’m not religious, I’m a humanist.”
• experts still discuss how best to fit humanist convictions under the right to ‘freedom of religion or belief’
• there are positive beliefs associated with humanism, but also non-belief in gods, so is it a belief, a religious belief?

The point is that using the semantic difficulties around this to dismiss someone’s humanist convictions seems deeply uncharitable.”

Another portion of the interview focused on the history of Humanism. The Home Office account describes Walayat as identifying the origin of modern Humanism with the Enlightenment (which is not unreasonable), but goes on to say:

“You were informed that Humanist ideas go way back before that to Greek philosophers and if you had any knowledge of this [sic]. You claim that ‘…I have an idea about the Greeks but not clued up on history, I believe what I believe’…  you were informed by the interviewing officer that he was referring to Plato and Aristotle… Available information states that The Happy Human symbol is is the international symbol of Humanism. You were unable to name any symbols of Humanism as you stated: ‘Symbols? I don’t remember, I am a bit stressed.’“

Plato and Aristotle are not normally considered humanist philosophers as such. Again, the IHEU letter of support notes:

“Furthermore, Hamza has apparently been asked about ancient Greek philosophers and humanist symbols as a test of his non-religiousness! This is peculiar for a few reasons. First, to compare the situation to that of a religious believer, not every Christian knows all about the apostles, or particular symbols like fishes and candles… There is no reason to expect all humanists to know comparable items of history and symbolism.

Second, the questions in this section imply that the Home Office is treating humanism as a monolithic, doctrinaire positive tradition. While for some humanists there is knowledge of and importance attached to e.g. philosophical canon, history, symbols, organizations etc, this is far from definitive of being a humanist. As a descriptive term a humanist can be someone who has simply rejected religious belief but holds some positive conception of human values (e.g. they still believe in a secular/naturalized idea of right and wrong). That is a minimal but sufficient idea of a ‘humanist’.

The threat faced by such humanists and the non-religious more generally is not dependent on being a ‘canonical’ type humanist… Sometimes, as a descriptive term, ‘humanist’ is just a shorthand for saying “I have rejected religion but that doesn’t make me bad, I want to be a good citizen, I believe in social responsibility independent of any idea of God…” Such a minimal statement of humanism is plenty sufficient to spark fierce opprobrium and threats…

Finally, the [rejection] letter says (point 23) that fear of persecution on grounds inter alia of religion has not been established. However, the above confusions around humanism as a set of beliefs or attitudes notwithstanding, the non-religiousness of Hamza’s broadly humanist convictions should not exclude them from being considered grounds based on ‘religion’.

Frankly, we think that the nature of some of these questions about humanism in the context of trying to discredit either/both that Hamza is a humanist and that this could put him at risk exhibits a profound dysfunction on the part of the Home Office in the treatment of non-religiousness. It shows very limited understanding of how such convictions – even in the looser sense of a broad description of someone’s attitude to religion and secular social responsibility – bring a person severely out of line in a conservative religious society, to the point that they can face threats and violence for manifesting these convictions.”

In a message to supporters, Andrew Copson, IHEU president and chief executive of Humanists UK, said: “Hamza’s life is now in serious danger because the Home Office has completely misunderstood the nature of humanism and seems to have forgotten that non-religious people have equal protections from persecution on the grounds of their beliefs. This is unacceptable, and now we must act quickly to save Hamza’s life.

“Please, take a minute from your day today to sign our petition to Home Secretary Amber Rudd, backing our demands to save Hamza’s life and re-educate the Home Office about humanism and the basic human rights non-religious people are entitled to in law.”