In a joint statement made by the International Humanist and Ethical Union (IHEU) and the Humanist Association of Ghana (HAG), humanists have called on Ghana to protect the human rights of all its people, regardless of their individual belief, sexual orientation or gender identity.

In the statement, delivered as part of the UN’s Universal Periodic Review at the 37th session of the Human Rights Council, IHEU representative Tars van Litsenborgh, noted that despite Ghana’s progress over the past number of years on human rights generally, “harmful traditional practices and prejudices often grounded in superstition, myths and misogynistic attitudes remain responsible for a large number of human rights abuses in Ghana.” He specifically raised issues of discrimination and violence against children, women, LGBTI persons and people with albinism, all of which continue to be prominent problems in the country.

Ghanaians who are lesbian, gay, bisexual, or transgender (LGBT) suffer widespread discrimination and abuse both in public and in family settings. While some Ghanaian officials have publicly called for an end to violence based on sexual orientation and gender identity, the government has yet to repeal a colonial-era law that criminalizes same-sex activity. 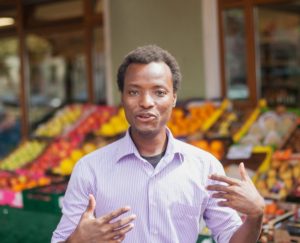 Until the day sexual minorities have the same freedoms as everyone else, there is no freedom and there certainly isn’t any justice for them. Whilst women are marginalized in nearly every sphere of their life, there is no freedom. Our children engaged in labour do not have freedom; they cannot enjoy their childhood like their peers elsewhere. Our fellow citizens shackled and sent to prayer camps are by no means free to live dignified lives.

We should endeavour to live up to our core belief in the right of individuals to be free and to live in a country that is just to them.”

The statement by the IHEU and Humanist Association of Ghana follows in full below:

This statement is supported by the Humanist Association of Ghana.

LGBTI rights in Ghana are heavily suppressed. Violence and discrimination based on sexual orientation and gender identity are common, often encouraged by the media and religious and political leaders. Consequently, we are deeply disappointed to note Ghana’s rejection of several recommendations aimed at decriminalizing same-sex relations between consenting adults and adopting measures to put an end to discrimination and violence against LGBTI communities. We remind the Ghanaian representatives that the validity and universalism of human rights – as applicable to all, whatever their sexual orientation or gender identity – cannot be at the whim of democratic consensus.

Despite Ghana’s progress over the past number of years, harmful traditional practices and prejudices often grounded in superstition, myths and misogynistic attitudes remain responsible for a large number of human rights abuses in Ghana. These include:

Consequently, we are glad to note Ghana’s acceptance of important recommendations on tackling gender inequality, discrimination and violence against women, as well the elimination of harmful practices such as child labour, sexual exploitation, early and forced marriage, violence and corporal punishment. We were however, disappointed with Ghana’s rejection of recommendations to establish measures and policies to address the stigmatization of persons with albinism and to ensure they are effectively protected against discrimination.

We remind Ghana, that like this Council, has a duty to protect the rights of all its people – regardless of how they happen to identify, whom they happen to love, or the colour of their skin.