IHEU returns to African Commission on Human and Peoples’ Rights

The International Humanist and Ethical Union (IHEU) has re-established its presence at the African Commission on Human and Peoples’ Rights.

IHEU Director of Advocacy, Elizabeth O’Casey, attended the 62nd session of the Commission, held in Nouakchott Mauritania, as well as the Forum for NGOs that preceded it. 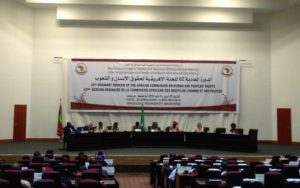 The 62nd session of the African Commission on Human and Peoples’ Rights meets in the Palais des Congres, Mauritania

During the session, there were debates on the use of the death penalty in Africa, Nigeria and Eritrea’s human rights records along with the opportunity for NGOs to raise human rights situations of concern on the continent. These include restrictions on freedom of expression, protest and peaceful assembly in some countries, threats to LGBTI people, child marriage, and lack of access to abortion.

The IHEU intervened with a statement to the Commission, in which O’Casey reaffirmed a core advocacy message of the IHEU: Tradition, Culture and Religion cannot be instrumentalised to undermine universal human rights. The statement partly provided an overview of concerns that the IHEU and its members have in the region in terms of human rights, and provided a specific response to a growing movement by states at the African Union to shrink the space of civil society observers at the Commission by using the notion of African traditions and cultures to reject the status of LGBTI NGOs and other groups. 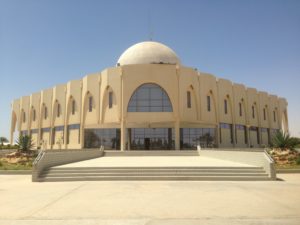 The most recent target of this campaign was the Coalition of African Lesbians (CAL), who currently have observer status – like the IHEU does – at the Commission, but whose status in June 2015 was threatened when the African Union requested that the Commission withdraw CAL’s NGO observer status because it allegedly “imposed values contrary to African values” (values cited in the Preamble to the African Charter). This comes as part of a broader movement to limit the groups that can gain and maintain observer status at the Commission and also reflects similar trends occurring at the UN Human Rights Council and elsewhere.

O’Casey said: “I am grateful we now have the resources at the IHEU to take up attendance of the African Commission again and to continue the excellent work started by our prior representative there, Leo Igwe. It is essential for us to engage with regional human rights mechanisms where possible, and given the moves by those with influence and power to lessen the space for NGOs at the Commission, it is more important now than ever.

“In addition to the weaponization of ‘culture’ and ‘traditions’ to exclude groups working on “non-traditional” rights, there was a recent attempt – led by Egypt – to introduce a state-controlled monitoring body of the Commission, which would mean the Commission losing its independence. This initiative didn’t pass but is a signifier of a current trend seen elsewhere: at the UN, the Inter-American Commission on Human Rights, and now in Africa. 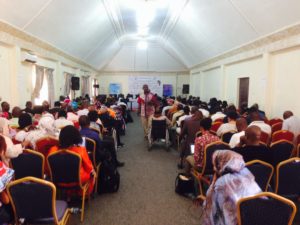 Participants at the NGO-Forum, in Nouakchott Mauritania

“Governments with poor human rights records, like Egypt, are scared of independent bodies that allow honest scrutiny of human rights situations and it is vital we as a global movement support these bodies where we can. One part of this is to increase an awareness that human rights belong to all, regardless of tradition or culture or religion and where we see those in power seeking to distort or monopolise values to deny rights to anyone we must speak out.”

Having the Commission take place in Mauritania also gave a opportunity for civil society to shine a spotlight on the poor human rights record in the country; including on freedom of expression, religion or belief and the issue of slavery.

Statement on the Human Rights Situation in Africa

I am honoured to be here representing the International Humanist and Ethical Union, which has over 150 member organisations across the world; including a number on this continent: In Burundi, Ghana, Kenya, Malawi, Morocco, Nigeria, South Africa, Tanzania, Uganda, and Zimbabwe.

The preamble to the African Charter, “Takes into consideration the virtues of their historical tradition and the values of African civilization which should inspire and characterize their reflection on the concept of human and peoples’ rights.” Yet, across the continent we see such traditions and values being instrumentalised to undermine human rights. Commissioners, Ladies and Gentlemen: I want to make only one plea in this statement to you today: we must not let this happen; we must not let culture, tradition and religion be manipulated in order to undermine the human rights of anyone.

For, the reality is that harmful traditional practices & prejudices often grounded in superstition, myths & misogyny remain responsible for many human rights abuses across this continent.

Witchcraft related abuses, including child sacrifice, remain rife in a number of countries, leading to persecution, torture and sometimes murder .

Cruel and inhumane practices against women and girls, including early and forced marriage, female genital mutilation, widowhood rituals, and honour violence are another phenomena we see in many countries.

Religion, tradition and culture are weaponised to attack abortion and sexual and reproductive health and rights, despite maternal mortality being a leading cause of death among women of childbearing age in Africa.

Sensitivities and passions around religious beliefs have also been instrumentalised by those seeking to retain power and prevent people from exercising their human rights to free expression and freedom of religion or belief. You can be put to death for expressing atheism in three countries in Africa, and blasphemy is outlawed in many more. Let me take this moment to remind us all that the African Charter protects people; not ideas. Any laws that seek to protect ideas and outlaw criticism of religions threaten to undermine the precious underpinnings of the whole human rights framework.

Violence and persecution on the grounds of sexual orientation and gender identity are also defended by some on the grounds of maintaining the so-called tradition and culture of societies; I have heard African representatives on the floor of the UN claim that there are no LGBTI people in their country because it goes against their culture. Same-sex conduct remains criminalized in most countries and discrimination against LGBTI people widespread. In this country, Mauritania, men can by law be stoned to death for having same-sex relations.

If you ask any of our members what values are important to them, they do not site the cultural relativism that so many of their governments do, but instead will say human rights for all – without regard to culture, tradition, nationality, race or religion. They will say, dignity, freedom and equality, kindness and solidarity. We must not let governments, anti-choice actors or those seeking power and control to weaponise and manipulate culture, tradition or religion to undermine the human rights protected by the African Charter and Maputo Protocol, the rights that we all deserve.

We would like to put on record our thanks for the work of the Commission and for Mauritania hosting us; however, we find it deeply disturbing that some local NGOs and human rights defenders have not been allowed entry to the Palais de Congres to take part in this session. This includes Les Femmes Chefs de Famille who have been working for years on promoting human rights in Mauritania. We urge the Commission to take this up with the Mauritanian authorities with some urgency.