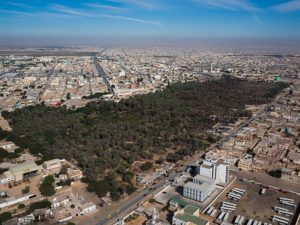 The death sentence will be mandatory for “apostasy” and “blasphemy”-related crimes in Mauritania, under a new law passed by the National Assembly on 27 April.

A group of twenty-one NGOs including the International Humanist and Ethical Union (IHEU), Amnesty International, PEN International and Reporters Sans Frontières, has released a joint statement calling on the government to reverse the new law.

The new law was passed even while Nouakchott was hosting the African Commission on Human and Peoples’ Rights. That event concluded with the AU’s human rights body calling on Mauritania to review its “blasphemy” laws. Also last week several UN Special Rapporteurs called on Mauritania to release imprisoned writer Mohamed Cheikh Ould M’kheitir.

The joint statement by 21 NGOs follows in full below.

Mauritanian authorities should reverse the recent adoption of a law on apostasy related crimes making the death penalty mandatory for “blasphemous speech” and “sacrilegious acts”, 21 national and international non-governmental organizations said today. The authorities should also end the arbitrary detention and guarantee the safety of a blogger, Mohamed Cheikh Ould Mkhaïtir, whose case appears to be related to the timing of the law. Mkhaïtir was convicted of apostasy and sentenced to death in December 2014 before a court reduced his punishment to two years imprisonment. Although his sentence has expired, the authorities continue to detain him.

The National Assembly passed a law on April 27, 2018 that replaces article 306 of the Criminal Code and makes death penalty mandatory for anyone convicted of “blasphemous speech” and acts deemed “sacrilegious”. The new law eliminates the possibility under article 306 of substituting prison terms for the death penalty for certain apostasy-related crimes if the offender promptly repents. The law also extends the scope of application of the death penalty to “renegade acts.”

The law also provides for a sentence of up to two years in prison and a fine of up to 600,000 Ouguiyas (approximately EUR 13,804) for “offending public indecency and Islamic values” and for “breaching Allah’s prohibitions” or assisting in their breach.

The National Assembly passed this law as the African Commission on Human and Peoples’ Rights (ACHPR) held its 62nd Ordinary Session in Nouakchott, the capital. The ACHPR has repeatedly said that countries should abolish the death penalty or establish a moratorium in line with the continental and global trend. In particular, the ACHPR emphasized: “In those States which have not yet abolished the death penalty it is vital that it is used for only the most serious crimes – understood to be crimes involving intentional killing. (…) Those sentenced to death have the right to seek clemency, pardon or commutation through a transparent process with due process of law.”

In addition, the United Nations has repeatedly stated that the mandatory imposition of the death penalty, even for the most serious crimes, is prohibited under international human rights law.

Mauritania has not carried out any execution since 1987. It has ratified numerous international human rights treaties including the International Covenant on Civil and Political Rights, the Convention against Torture and the African Charter on Human and Peoples’ rights that protect the right to life. The adoption of the law making the death penalty mandatory for certain apostasy related crimes is a huge step backward from the abolition of the death penalty.

The timing of the law appears to be related to the Mkhaïtir case. In 2014, a Nouadhibou court sentenced Mkhaïtir to death for apostasy under article 306 for posting an article online denouncing the use of religion to legitimize discriminatory practices against the blacksmith caste in Mauritania with which he identifies.

However, on November 9, 2017, the Court of Appeals of Nouadhibou commuted Mkhaïtir’s death penalty to a two-year prison term and a fine, after recognizing his repentance. A week later, the Council of Ministers approved the draft law to repeal and replace article 306.
Since Mkhaïtir had already served almost three years in detention by the time that the Court of Appeals reduced his sentence, he should have been released. However, he remains in incommunicado detention. On May 2, 2018 the Mauritanian authorities informed the UN Committee on the Elimination of Racial Discrimination (CERD) that Mkhaïtir was in “administrative detention for his own safety”.

Throughout the legal proceedings against Mkhaïtir, thousands of protesters took to the streets in several towns, including Nouadhibou and Nouakchott, demanding that Mkhaïtir be sentenced to death and executed. He continued to receive death threats when he was in prison. His relatives, friends and supporters also received death threats.

In addition to Mkhaïtir, other Mauritanians who speak out against slavery and discrimination in Mauritania risk reprisals, including arbitrary arrests, torture and other ill-treatments, bans on their activities or their organizations.