The International Humanist and Ethical Union (IHEU) has expressed regret at the withdrawal of the United States of America from the United Nations Human Rights Council. 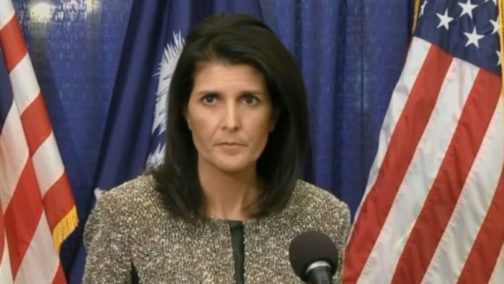 Nikki Haley the U.S. envoy to the United Nations, says the Council is a “cesspool of political bias”. This week the US has been widely accused of human rights failings after separating children from immigrant parents and detaining them in internment facilities

During a press conference held in Geneva earlier today, the USA announced that it was giving up its membership of the Council. This may be regarded as only the latest move in the Trump administration’s consistent rejection of multilaterailst efforts internationally. US Envoy to the UN, Nikki Hayley, described the Council as a “cesspool of political bias,” and left before accepting any questions from the media.

During a presentation to the Council this morning, the UN Special Rapporteur on Freedom of Expression, David Kaye, expressed his regret at the US decision, and listed a number of recent successes of Council.

The IHEU also voices its concern. In response to the US decision, IHEU Director of Advocacy, Elizabeth O’Casey, said:

“As an organisation, the IHEU has always supported multilateralism and the vision of the United Nations. This does not mean we are an uncritical friend . Indeed there are legitimate criticisms of the UN Human Rights Council and other bodies, which we have voiced ourselves vociferously since its inception and have also shared some of the US concerns publicly.

“However, we believe it is vital that states continue to engage with the process and support what is currently the only international forum engaging states that exists to promote and protect human rights globally.

“Given the issues with its membership, the council has nonetheless made a significant contribution to protecting human rights, providing justice to victims, and highlighting human rights abuses worldwide, including in areas such as free expression, freedom of religion or belief, LGBTI rights, the rights of women and the rights of the child.

“Notably, the UN Human Rights Council also gives space for NGOs – such as the IHEU – to engage directly with the states we are critical of and an opportunity to air our concerns in the face of such countries. It gave us the chance to deliver a personal plea on behalf of Ensaf Haidar to the Saudi delegation, it gave Kacem El Ghazzail the opportunity to condemn Morocco on its treatment of atheists whilst the Moroccan delegation listened, and it gave me the opportunity to put straight the Holy See whilst their representative sat less than a meter away, just a few months ago.

“For the US to give up on the process is deeply regrettable and only furthers the chances that those states who want to limit civil society participation and free expression (which the USA has traditionally championed) will get their way.

“Multilateralism, a rule-based international order and a robust space for civil society to scrutinise state action, despite all its problems, is the only way forward. And the US decision, when taken within the context of its current human rights record at home and abroad  and its continuing uncritical friendship with Council member Saudi Arabia, seems particularly cynical.

“On Monday, in what was to be his final statement to the UN Human Rights Council High Commissioner for Human Rights said that the Human Rights Council is “only as great or as pathetic as the prevailing state of the international scene at the time.” This is the essence of multilateralism: it is what we make of it, it is ours to shape and define together. At the IHEU we will continue to contribute to that vision.”

This is the first time any country has voluntarily left the Human Rights Council. The only other member to leave was Libya, which was suspended in 2011 after the UN General Assembly deemed the government responsible for gross and systematic human rights violations.

In 2006 when the Human Rights Council was created, the Bush Administration decided to boycott it for many of the same reasons cited by the Trump administration today. It wasn’t until years later, in 2009, that the United States re-joined under the Obama administration.