To mark World Humanist Day today (21 June), humanist organizations from around the world are backing a crowdfunding campaign to support the global representative body of the humanist movement, the International Humanist and Ethical Union (IHEU).

IHEU has launched the “Protect Humanists at Risk” crowdfunding campaign to raise funds for its work on human rights issues, in particular persecution against non-religious people.

According to the campaign website: “12 countries including Saudi Arabia and Iran can sentence atheists to death under “apostasy” laws” and in many other states, “”blasphemy” laws are used to stop humanists promoting human rights”.

The IHEU stresses that as well as fear of prosecution by the state, militant groups also pose an alarming threat, with freethinkers attacked and even killed in the past few years in countries including Pakistan, Bangladesh, Maldives and India. 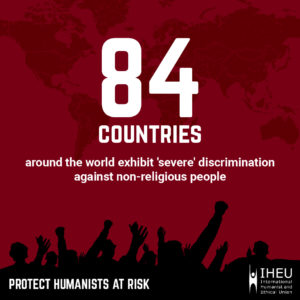 “World Humanist Day is a time when we want to celebrate humanism and humanist values – but we have to practice those values as well! IHEU has been standing up for non-religious rights, supporting and advising humanists who are being persecuted. And we’ve been changing the way the human rights bodies, experts and lawmakers think about non-religious rights. Now is the time for the worldwide community of humanists and non-religious people to come together in solidarity and help us to protect those at risk.”

The campaign aims to raise £20,000 (approximately US$26,000). The crowdfunding page accepts several major world currencies including Euros and US Dollars.