IHEU calls on UN to respect the cultural rights of humanists

Humanists have urged the UN Human Rights Council to recognise the individual cultural rights of humanists and freethinkers across the world.

The comments by the International Humanist and Ethical Union (IHEU) came as part of a debate on the Durban Declaration and Programme of Action on intolerance, racism and discrimination at the Human Rights Council. 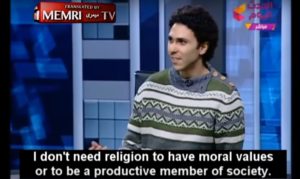 Mohamed Hisham speaking on an Egyptian TV debate, which he was told to leave after expressing support for atheism and evolution

IHEU argued that core to the Durban Declaration is the role of culture in promoting the welfare of humanity, and that this is reinforced by the Universal Declaration on Human Rights (UDHR) and International Covenant on Economic, Social and Cultural Rights (ICESCR), which affirm human rights to culture and science.

She pointed out however, that “those expressing the values of humanism and science are often silenced and penalised by states whose official belief system differs.

“Humanist artists and scientists are targeted because they are seen as a threat to states, often because they resist fundamentalist agendas, advocate democratic reforms, and promote tolerance over discrimination.”

The UN Special Rapporteur on Cultural Rights has described art, education, science and culture as “among the best ways to fight fundamentalism and extremism. They are not luxuries, but critical to creating alternatives, making space for peaceful contestation, promoting inclusion and protecting youth from radicalization.”

She also advises that anti-fundamentalist initiatives should be done “through education in accordance with international standards, informed by humanism, including about the value of cultural diversity, the cultural rights of all.”

As part of the her statement, O’Casey drew attention to a number of cases where humanists and freethinkers have defended their beliefs and promoted arts and science.

This included the case of Ashraf Fayadh, an atheist poet in jail in Saudi Arabia for blasphemy and apostasy, as well as an Iranian scientist currently facing the death penalty, and the freethinking writer, Shahzahan Bachchu, who was murdered for his rationalist writings and critique of fundamentalism.

O’Casey also highlighted the case of atheist poet Mohamed Hisham, who, after stating his support for evolution and atheism on a television debate was told to leave and seek psychiatric help. The host apologised to viewers for having “this sort of Egyptian” on the show, describing Hisham’s ideas as “destructive and bad for Egyptian youth.”

The Durban Declaration reaffirms that “cultural diversity” advances the “welfare of humanity”. Several human rights instruments, including the Universal Declaration on Human Rights (UDHR) and International Covenant on Economic, Social and Cultural Rights(ICESCR), support this by affirming the right to culture and science.

Durban also recognises the central role that religion and belief can play in the “inherent dignity and worth of the human person.”

For humanists and freethinkers, the expression of cultural rights and science are fundamental to an expression of who they are and their worldview.

Yet those expressing the values of humanism and science are often silenced and penalised by states whose official belief system differs.

“I don’t need religion to have moral values or be a productive member of society.” These were the words expressed by Mohamed Hisham, an Egyptian atheist who expressed his support for evolutionary theory in a TV debate. He was thrown out of the interview and told to seek psychiatric help. This follows a media frenzy and state-led re-education campaign to “eradicate” atheism in Egypt, which began in 2014. Hisham is now fearful for his personal safety.

Humanist scientists, and computer programmers in Iran languish in jail on charges of insulting Islam and other charged; whilst in Bangladesh, yet another freethinking writer, Shahzahan Bachchu, was recently murdered. In Saudi Arabia, atheist poet Ashraf Fayadh is serving an eight-year jail term with 800 lashes for “apostasy” and “promoting atheism.”

Durban highlights the link between free expression of religion or belief and the eradication of discrimination and intolerance.

Yet, humanist artists and scientists are targeted because they are seen as a threat to states, often because they resist fundamentalist agendas, advocate democratic reforms, and promote tolerance over discrimination.

We call on this Council to ensure that the commitments made in Durban apply equally to humanists expressing their cultural rights.