The International Humanist and Ethical Union (IHEU) has joined a coalition of NGOs calling on Member States of the United Nations not to grant membership of the Human Rights Council (HRC) to states which are “unfit” due to their record on human rights and international cooperation. 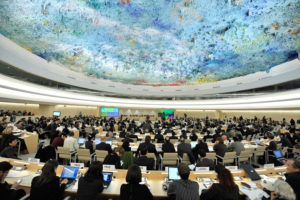 The letter voices the concern of NGOs that a number of the States running for election “fail to fulfil minimal requirements with regard to both the promotion and pro­tection of human rights and cooperation with the Council and other UN human rights bodies and mechanisms.”

It notes that some candidate states have not cooperated with the UN human rights system and have been party to attacks against UN Special Procedure Man­date-Holders.

Other candidate states have “engaged in acts of intimidation and reprisals against human rights defenders and civil society organizations”.

The letter concludes by stating that, “voting for these candidates would undermine the Council’s credibility and institutional integrity” and urging states not to engage in “vote trading or privileging political considerations over fundamental human rights.”

The upcoming election for members of the Human Rights Council will take place at the UN General Assembly in New York. It will determine which States sit as Members of the Council in the next three years (2019-2021). The Council has 47 members elected for staggered three-year terms and on a regional group basis.