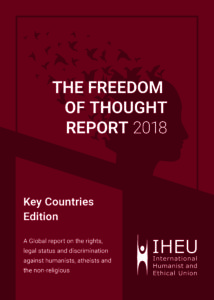 In a world first, a list of the best and worst countries to be an atheist has been published.

The report is published by the world’s leading organisation for the non-religious, the International Humanist and Ethical Union (IHEU).

The IHEU also supports humanists at risk of persecution, and has issued a renewed call for funding and donations to continue their important work

This year the IHEU launches it’s 7th annual Freedom of Thought Report at the United Nations General Assembly in New York City. For the first time the report contains a ranking of every country in the world, according to its level of discrimination against atheists, humanists and the non-religious.

At the same time, the organization issues a call for support, from atheists and humanists in wealthier nations around the world, for valuable funds to continue its work.

Commenting on the launch of the 2018 report, Andrew Copson, President of the IHEU, said:

“At a time of growing nationalism, we continue to see those who are brave enough to criticise and critique conservative religious leaders demonized as ‘unpatriotic’ and ‘subversive’.

“At IHEU, we are leading the world in campaigning to promote and protect the rights of atheists and humanists – but frankly we cannot keep up with the large and powerful lobbies of the Christian-right in America and conservative Islam in the middle-east. This is why we issue a frank request; if you are lucky enough to live in one of the ‘top 10’ countries identified in this report, please consider making a donation today, so that we can continue our important work to protect those in the ‘worst 10’.”

Above: the top 10 countries assessed by various forms of discrimination against the non-religious.
Below: the bottom 10, worst-performing countries. A colour-coded “Signal light” summarizes the severity of ratings applied in each of four thematic areas. Read more about the Ratings System and find the full Ranking Index at freethoughtreport.com.

Speaking at the launch of the report at the United Nations General Assembly in New York, Ahmed Shaheed, UN Special Rapporteur on Freedom of Religion or Belief, said: 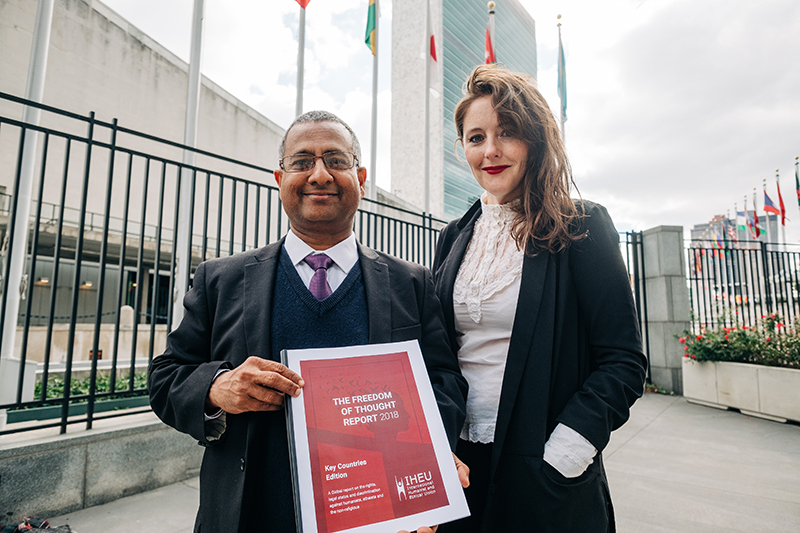 “The Freedom of Thought Report has become an invaluable source of well-researched and important information for policymakers. The report highlights the range of discrimination that people can face around the world because of their non-religious beliefs, something that many would like to ignore.”

Commentary on the 2018 edition and rankings

Sharing the number 1 spot, Belgium, Netherlands and Taiwan are congratulated for their “pluralistic” approach to religion in public life.

In the worst spot, Saudi Arabia comes into particular criticism for a 2014 law defining the “promotion of atheist thought in any form” as terrorism, and for the prosecution of liberal activists and campaigners generally, including a death sentence handed down in 2017 for an alleged ‘apostate’, Ahmad Al-Shamri, on the accusation of atheism.

In Pakistan, last year’s “anti-blasphemy crackdown” features prominently, several alleged atheist bloggers and activists having been arrested and tortured on charges of making posts online that were “insulting” to religion. Pre-trial detention and the slow progress of ‘blasphemy’ cases is a well-known issue in the Pakistani justice system, and some of those arrested as “atheists” early last year remain in prison.

The report notes that the appearance of Malaysia and Maldives in the bottom-10 rankings might surprise some. However, both countries have seen incidents of anti-atheist rhetoric in the past few years. In the Maldives, alleged atheists have been kidnapped, and secular activists have been disappeared or murdered; citizenship is restricted to Muslims and the previous government had been running an autocratic programme of Islamization, though this may change following an unexpected defeat in last month’s elections.

For further discussion of the ratings and rankings see the Editorial Introduction 2018.