Staff and representatives of the International Humanist and Ethical Union (IHEU) have been saddened to learn of the death of Barrie Berkley, a long-time volunteer, contributor and passionate proponent of Humanism, both locally and internationally. 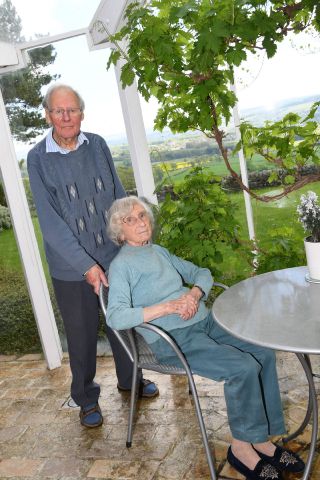 For decades he worked alongside his wife Jean Berkley on humanist causes, creating and inspiring new initiatives in several countries.

IHEU Director of Communications & Campaigns Bob Churchill who worked for IHEU on projects in Uganda supported by the Berkleys, said:

“Barrie was a compassionate and committed man, someone in the international movement that you simply had to know about and respect for his long service and his dedication to fostering humanist community not only in his local area, but also abroad. In particular Barrie and Jean’s interest in East Africa has inspired and supported a wealth of projects across the region.”

Barrie and Jean were joint recipients of the Distinguished Service to Humanism award in 2010. Then-IHEU president Sonja Eggerickx explained some of their outstanding contributions to Humanism:

“The cause of Humanism attracts many dedicated people who give generous support to developing Humanist principles in many ways. Some give their time, some use their professional skills and others provide financial support.

The service to Humanism given by a special group of people includes all of the above and more. This year, the award for Distinguished Service to humanism goes not to an individual but to a husband and wife team who have supported Humanism for very many years in the United States, in the UK and internationally through their support for IHEU.

When they lived in the US, they were members of the American Ethical Union. Then, when they returned to England, they became active members of the British Humanist Association and at the same time both worked hard on behalf of North East Humanists. They also have strong links with Africa and have played a major role in supporting the work of IHEU in East and West Africa, particularly in helping the development of the Humanist
schools in Uganda.

They have visited Uganda many times and are part of IHEU’s Advisory Committee on the Humanist Schools in
Uganda. He is also a member of IHEU’s Membership Growth and Development Committee, as he takes a great interest in new and emerging groups, working towards IHEU’s long term aim to have a sustainable Humanist membership organisation in every country.

… Barrie and Jean, congratulations on this well-deserved recognition of your commitment to Humanism
and thank you for all you have done to promote the ideals of Humanism and the work of IHEU.”

North East Humanists, a local partner of Humanists UK, said in a statement:

“We are very sad to announce the death of our president Barrie Berkley. Barrie worked to foster a kinder, rational and more tolerant society through Humanism. He was not only active in North East Humanists but was also fervent supporter of the International Humanist and Ethical Union and of Humanists UK, and he made a huge contribution to the work of Uganda Humanist Schools Trust.

We fondly remember Barrie, his warmth, his humour and his sharp intellect. Throughout his life, Barrie endeavoured to make the world a better place, and his legacy is that he succeeded in that aim.”

Steve Hurd of the Uganda Humanist Schools Trust, which worked alongside Barrie and Jean supporting the growth of the Humanist schools movement in Uganda, paid tribute:

“Even in the past year, well into Barrie’s nineties, the Berkley’s have been instrumental in garnering substantial funds which have made possible the completion of a fine new teaching block at Isaac Newton. It includes three large classrooms and a second science laboratory, which I know, as a scientist, Barrie would have been proud. In the new school year, the additional classrooms will allow the school to lower class sizes substantially by running two parallel classes in each year and thus bring further rises in educational standards.

“Barrie’s actions have always been guided by firm humanitarian principles. Convinced from the start of the enormous value of the Humanist Schools’ Project, he has shown great determination to see it through to the very end of his life.

“… So many people will miss Barrie. Throughout his life, Barrie endeavoured to make the world a better place. There can be no better legacy than to see the life-changing impact of the Humanist schools in Uganda and of his other projects to help disadvantaged people in Uganda and Kenya.”

As a couple, Barrie and Jean also campaigned for thirty years as members of UK Families Flight 103, disputing the imprisonment of the only person convicted of carrying out the Lockerbie bombing in 1988. The terrorist attack claimed the life of their son Alistair, one of 243 passengers and 16 crew killed. The case is now under review by the Scottish Criminal Cases Review Commission (SCCRC).

Barrie is survived by his wife Jean and sons James and Matthew.