Religion does not trump human rights, Humanists International has argued at the African Commission on Human and Peoples’ Rights, reiterating a call for African states to abolish laws against ‘blasphemy’ and ‘apostasy’.

During a meeting on the human rights situation in Africa, Humanists International Director of Advocacy, Elizabeth O’Casey, criticized Mauritania’s move last year to make the death penalty mandatory for apostasy.

She also called on the Commission to start more systematic work towards the abolition of blasphemy and apostasy laws across the continent.

In Humanists International’s first statement to the 64th session, O’Casey reminded delegates that,

“You cannot use the presumed articles of a religion to deny someone their freedom of religion or belief”, and “measures taken against blasphemy and apostasy disproportionately impact humanists and atheists in their expression of secular values, critique of the politicisation of religion and support for democracy, the rule of law and human rights.”

The Commission is meeting in Sharm El Sheikh, and Humanists International took the opportunity to highlight the situation for atheists, humanists and freethinkers in Egypt: “For years now here in Egypt, the non-religious have faced enormous hostility, prejudice, and blasphemy arrests […] atheists are one of Egypt’s least-protected minorities.” 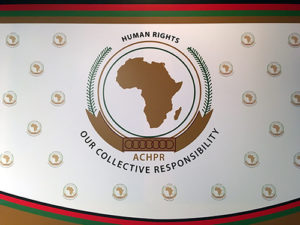 Emblem of the African Commission on Human and People’s Rights: “Our Collective Responsibility”

In response to the statement, the Egyptian ambassador “thanked” Humanists International “for the preventive insights they made in their statement,” and said that a cornerstone of the society is “equal rights and non-discrimination, no matter how strongly someone believes or disbelieves.”

Atheists in Egypt have regularly been on the receiving end of denigration by religious and political figures in recent years, including a proposed national programme to “educate” young people against atheism, and discussion in 2017 of a proposed parliamentary bill to outlaw atheism as a form of “contempt of religion”. However, there are some minimal signals of a more inclusive attitude, with president Sisi quoted as saying last year that “even the right not to worship is something that we cannot intervene in.”

O’Casey’s statements follows in full below:

Humanists International welcomes the opportunity to address the African Commission at its 64th session.

Last year, whilst we gathered in Mauritania to strengthen the protection of human rights on the continent, right outside the doors of our assembly our hosting government adopted an amendment to its criminal code making the death penalty mandatory for any person found guilty of apostasy or blasphemy, with no possibility for the convicted to repent or appeal.

We commend the Commission’s chairperson for having, at the time, promptly called for the government to review the legislation. Yet, the particularly severe nature of anti-apostasy and blasphemy legislation in a number of African states, we believe, urges a more systematic approach from the Commission.

Various national legislations across the continent criminalise blasphemy and apostasy. Sudan penalises apostasy with death, whilst restrictions on the free expression of opinions that might offend religious sensibilities or religious symbols are in place in countries such as Ethiopia and Egypt. Other countries, for example Somalia, criminalise offences against one specific religion, in this case Islam.

Notably, measures taken against blasphemy and apostasy disproportionately impact humanists and atheists in their expression of secular values, critique of the politicisation of religion and support for democracy, the rule of law and human rights.

“The right to worship is the right of everyone, and even the right not to worship is something that we cannot intervene in.” These are the words of President Al-Sisi at the World Youth Forum in November last year.

We appreciate the clarity of this statement and hope that he will lead his nation based on this principle. It is overdue. For years now here in Egypt, the non-religious have faced enormous hostility, prejudice, and blasphemy arrests. Human Rights Watch has previously noted that, although the constitution ostensibly guarantees freedom of belief and expression, atheists are one of Egypt’s least-protected minorities.

Egypt is party to human rights treaties, including the International Covenant on Civil and Political Rights and the African Charter on Human and Peoples’ Rights, which require its government to respect and protect freedom of religion or belief and freedom of expression, without any discrimination. Whilst thanking Egypt for their hospitality at this session, we want to take this opportunity to call on its government to be true to its constitution and to the sentiments expressed by the President last year, and respect and protect all its citizens whatever they believe.

More broadly, in order to begin systematic work towards the abolition of blasphemy and apostasy laws, Humanists International calls on the African Commission to:

During the opening ceremony of this Session, His Excellency Mr Omar Marawan, celebrated the values of tolerance and diversity in making Egypt what it is today.

Tolerance and diversity mean embracing the rights and freedoms of those who think differently, those who question the status quo, dogma and authority.

The right to free thought, religion, conscience and expression together protect personal choices and personal convictions; they are central to respecting who we are now as individuals and who we may become, in Egypt, in Africa and across the world.