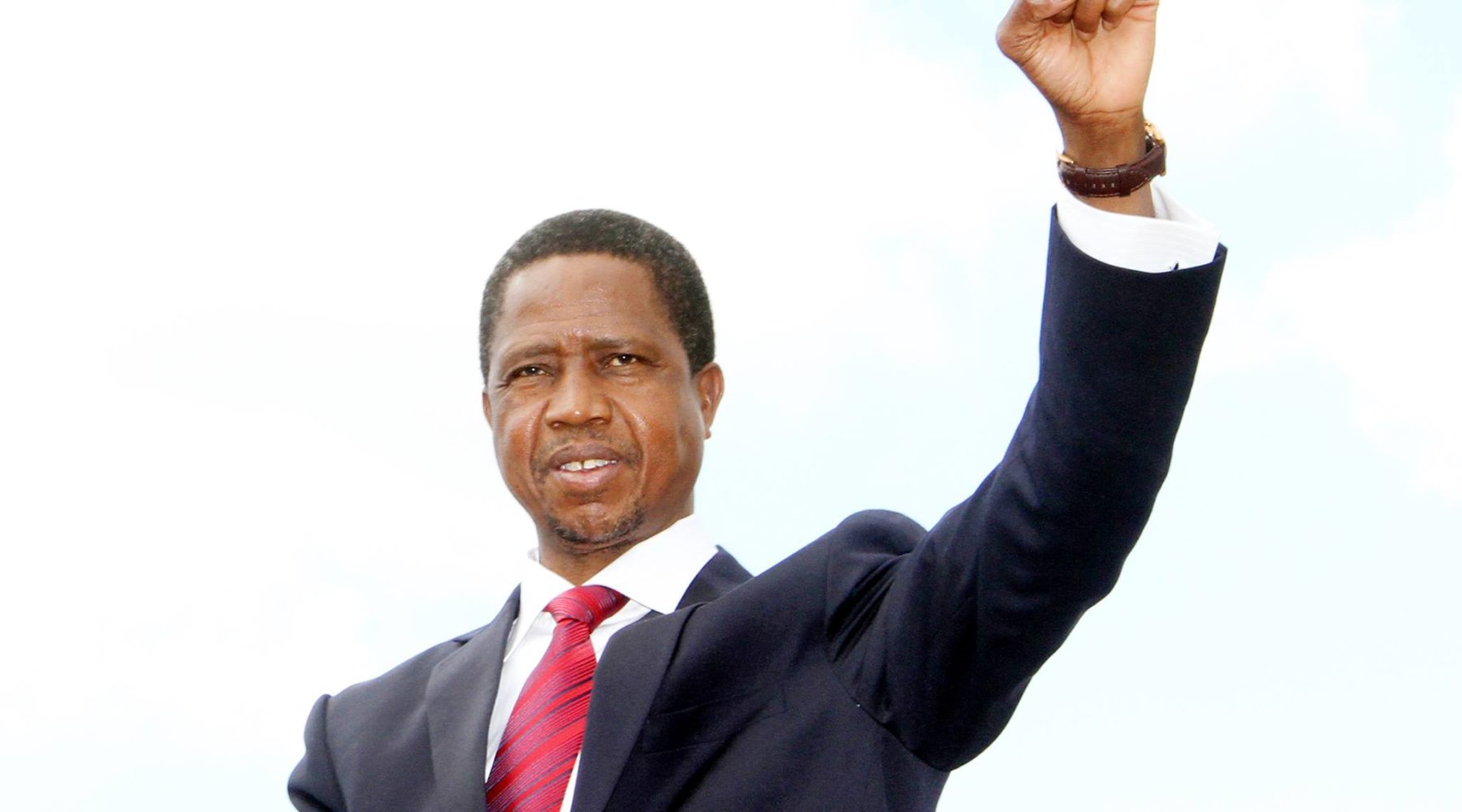 President of Zambia declares “fools think there is no God” – reports

During a recent public appearance, the President of Zambia, Edgar Lungu, is reported to have led prayers for rain, while regretting that “there are some Zambians who don’t want to call upon God Almighty”.  Multiple news media headlines reported his statement as: “Some Zambian fools think there is no God”. 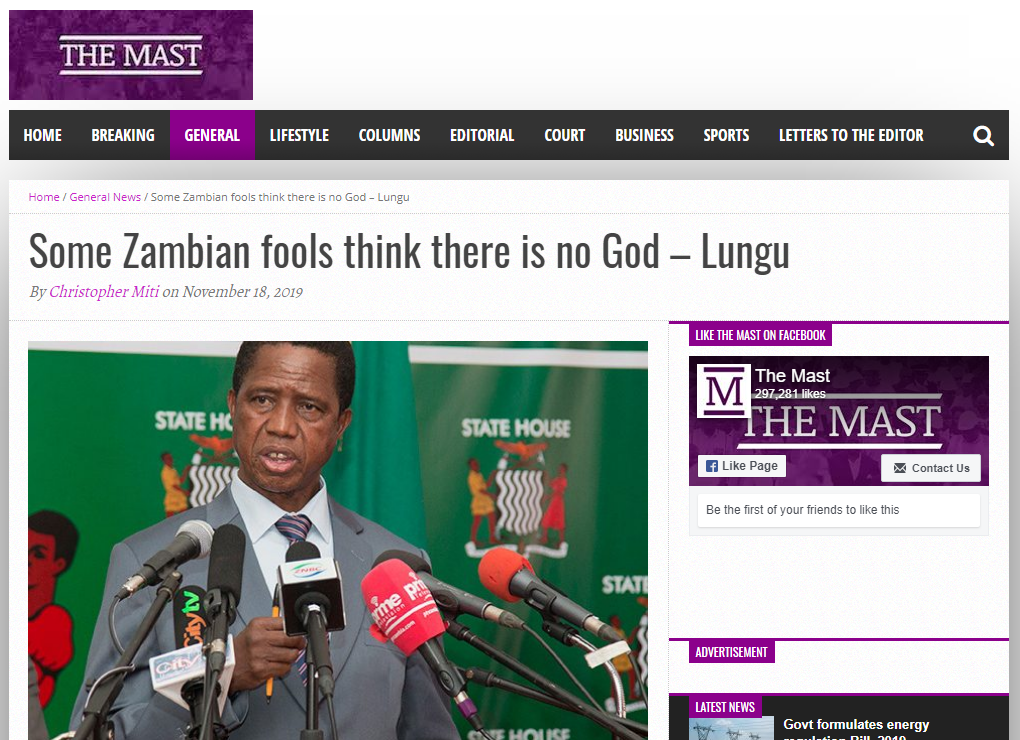 The Mast reports President Lungu’s prayer at a public meeting at a primary school in Vubwi district.

Quoted as the President’s prayer, he said:

“Let us pray to God that He gives us enough rains so that we plant and harvest. I am saying this without shame because there are some Zambians who don’t want to call upon God Almighty, but we believe there is God Almighty who looks after us and is very provident and He provides for us. For that reason we’ll not work hard, doing the best and leaving the rest to God Almighty the creator of heaven and earth.”

This is not the first time that humanists and atheists of Zambia are attacked for their lack of belief in God.

In June this year, Humanists & Atheists of Zambia (a Member Organization of Humanists International) announced their conference, titled: “I’m a proud humanist“. In response, they faced calls on the government to ban the event. In a post addressed to the Minister of National Guidance and Religious Affairs, Hon. Godfridah Sumaili, one Facebook user argued that Zambia had a Christian constitution and claimed that permitting meetings of atheists would “corrupt the morals of Zambian society”. He said the group should face “the full wrath of the law”.

Humanists & Atheists of Zambia responded to the criticism, appealing to the same Constitution, which “does recognize the freedom of religion, expression, and assembly of every citizen”. And yet there would be further challenges to organizing the conference:

Thasiyana Mwandila, Vice President of Humanists & Atheists of Zambia, told us how difficult it has been to organize as a group:

“The first big obstacle was announcing the event and spreading the word. But that was nothing compared to the second obstacle, which was finding a venue. Indeed, as soon as we told people why we wanted to hire the venue, they said that they would call us back, but then never did. Somebody even asked us to remove the word “atheist” from the banner.”

The conference, funded with a grant from Young Humanists International, was originally scheduled for on 18 October, which coincides with the day of National Prayer, Fasting and Reconciliation, a public holiday established in 2015 by President Edgar Lungu “as a sign of the country’s reverence to God and the acknowledgement of his sovereignty.”

Humanists & Atheists of Zambia had to postpone the event. Not only because of the lack of venue, but also because of the potential repercussions of holding the event on the National Prayer day, citing concerns that police would be patrolling the streets to ensure that people where not indulging in practices contrary to Christian belief.

In the end the event took place on 2 November, at a secret venue.

“We decided to not publicize the real name of venue for security reasons”, said Larry Tepa, the President of Humanists & Atheists of Zambia.

“On the banner of the event we said that the venue would have been the ‘Atheist Hotel’, in the ‘Heathen Ballroom’. In the end we found a location, but only because we introduced ourselves as ‘Humanist Association of Zambia’, removing any reference to atheism”.

The “I’m a proud humanist” conference took place despite the criticism and difficulties, with a relatively small turnout. This has not discouraged the organizers, who have already announced their will to organize another event in the near future. 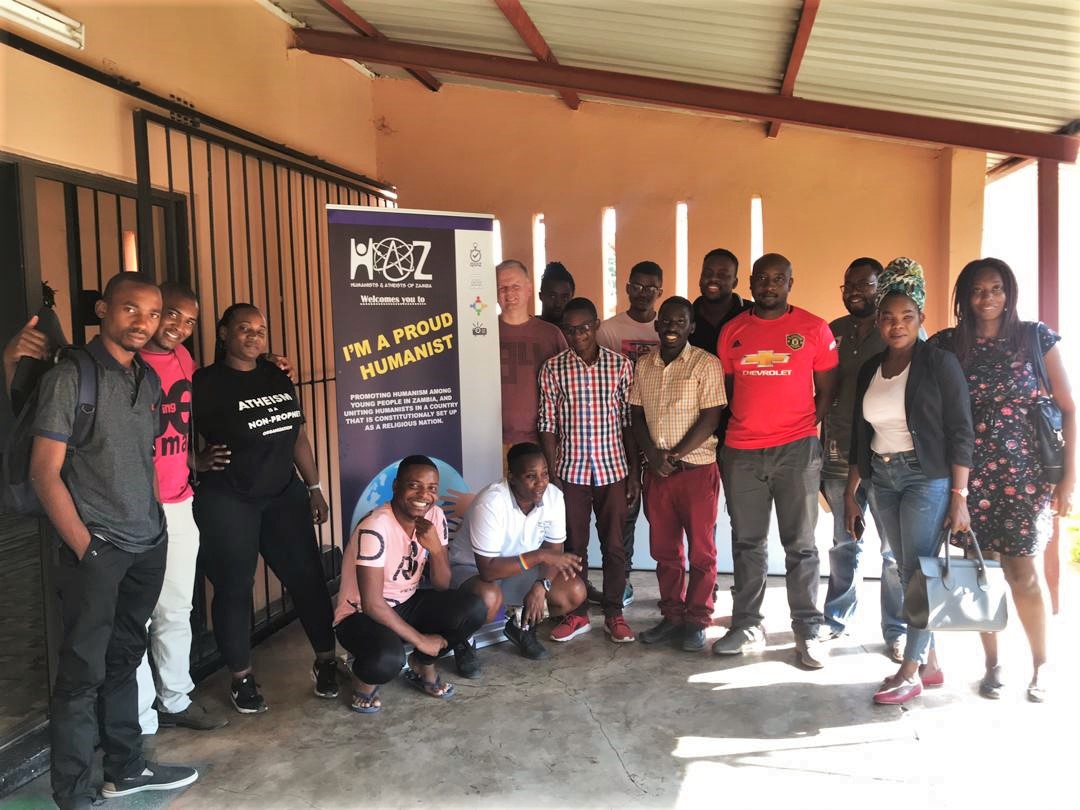 Participants at the “I’m a proud humanist” conference

“The freedom from and of religion is a right that everyone should enjoy without facing discrimination or prejudice and as such, it is necessarily to strongly denounce the sentiments shared by our president. Having different opinions regarding belief does not give anyone the right to show prejudice.

“As Humanists we believe that Atheists can do a lot of good to this world without the need for religion, the belief in a god or other supernatural forces, we believe that this is the only life we have, and we can have fulfilling lives on the basis of reason and humanity.

“This month, we had our first gathering aimed at uniting the irreligious community and showing them that they aren’t alone. We plan to normalize atheism, continue to promote humanist values in this country and we hope that the religious community comes to acknowledge that we have just as much rights to and from belief as they do.”