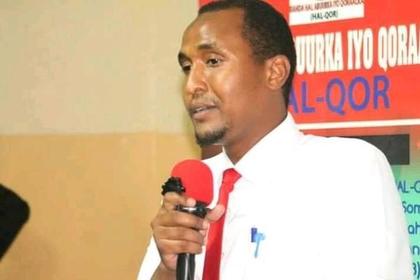 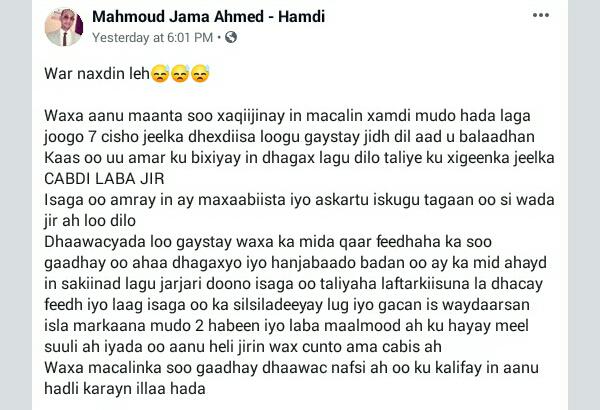 The accusation of blasphemy

In February 2019 Professor Mahmoud Jama Ahmed, who teaches humanities and social science at the University of Hargeisa, published a post on his Facebook page which questioned whether praying to God for water was a useful strategy to overcome the drought that affects Somalia every year, suggesting that Somali authorities should have addressed the problem with a more scientific approach.

This post went viral and was widely interpreted as an act of “blasphemy”. Mahmoud then started receiving death threats and was eventually arrested by the Somali police on 21 March 2019.

Mahmoud contends that, before being presented to the court, he suffered months of illegal detention, physical harassment, searches and various forms of intimidation.

The sentence and the presidential pardon

On 30 April 2019 Mahmoud was sentenced to two and half years in jail for “blasphemy”. Afterwards the prosecutors petitioned the Court of Appeal to increase Mahmoud’s sentence to death, but this was overruled, and the original sentence was upheld.

On 27 January 2020, after ten months in jail, Mahmoud received a presidential pardon, but only on the condition that he does not practice any clerical activity and he was also suspended from university work for five years.

The nightmare for Mahmoud did not end there. Despite having closed his blog and Facebook page, and having refrained from any public activity, Mahmoud kept receiving death threats.

On 28 February a prominent local Imam, Adam Sunnah, publicly called for his death during Friday prayers. In a recording heard by Humanists International, Sunnah says that no repentance should be accepted from Mahmoud because he is an apostate and apostates must be killed even if they repent. The Imam also said that killing Mahmoud would be good for him because he will benefit from it in the afterlife.

What you can do

Humanists International has made a briefing document containing all the up-to-date information of Mahmoud’s case.

We invite all our Members and Associates and supporters around the world to use the briefing to alert their own government’s foreign office and to lobby Somali embassies in their own country, calling upon them to urgently act to protect Mahmoud’s safety.

In addition, we invite all humanist organizations and individuals to share the story of Mahoud as widely as possible, in order to highlight Mahmoud’s case at the international level in the hope that he can receive protection from the Somali authorities.