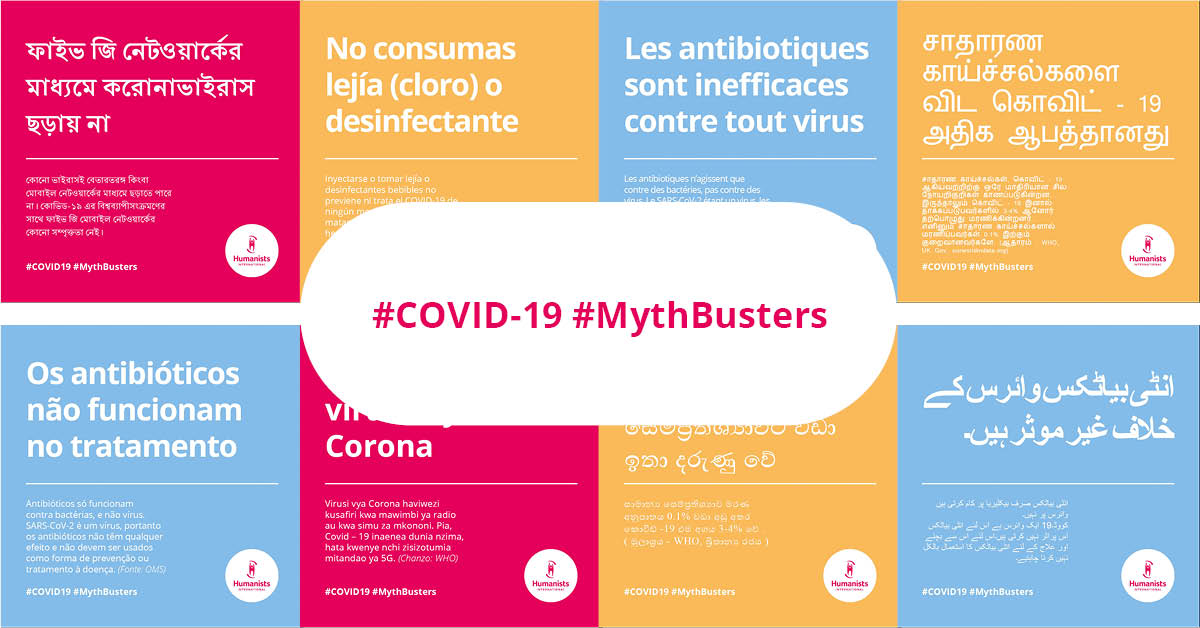 Thanks to the help of Members and Associates across the world, Humanists International is making available to the wider public a series of informative memes, translated into dozens of languages. The goal is to reach those millions of people who may not have access to proper scientific information in their own language.

Conspiracy theories, superstition and fake news are contributing to the spreading of the contagion on a global scale. This is particularly true in those regions where irrational beliefs and skepticism towards science is widespread. In this regard, misinformation is one of the best allies of the virus – “almost like another virus to fight”, as Leo Igwe said during his interview for the #GlobalHumanismNow series.

In this situation of disorientation and uncertainty, humanists from all around the world can make a difference by countering misinformation about COVID-19. That’s why Humanists International launched a social media campaign called COVID-19 #MythBusters: a series of memes displaying evidence-based messages translated into multiple languages, spoken by millions of people around the world. 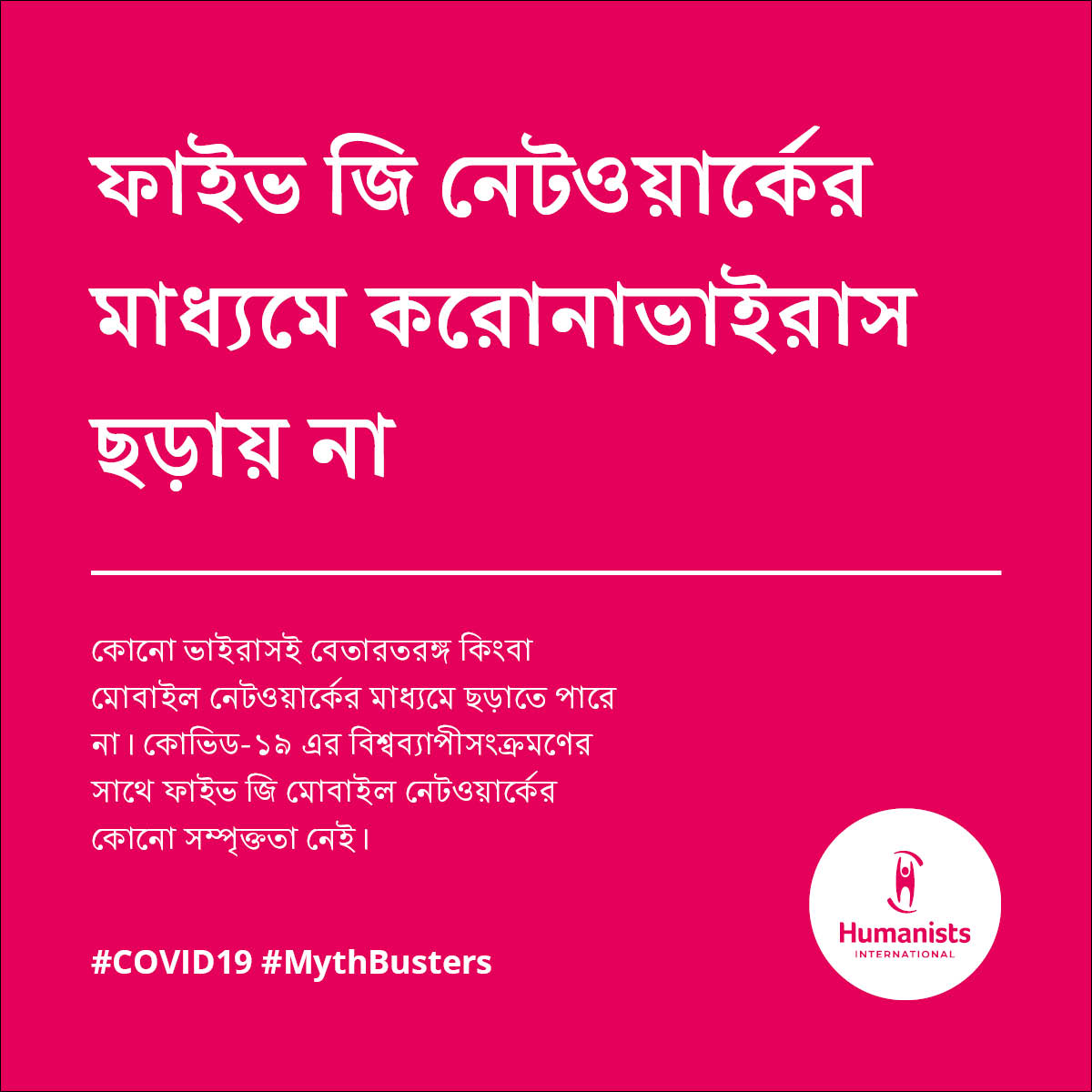 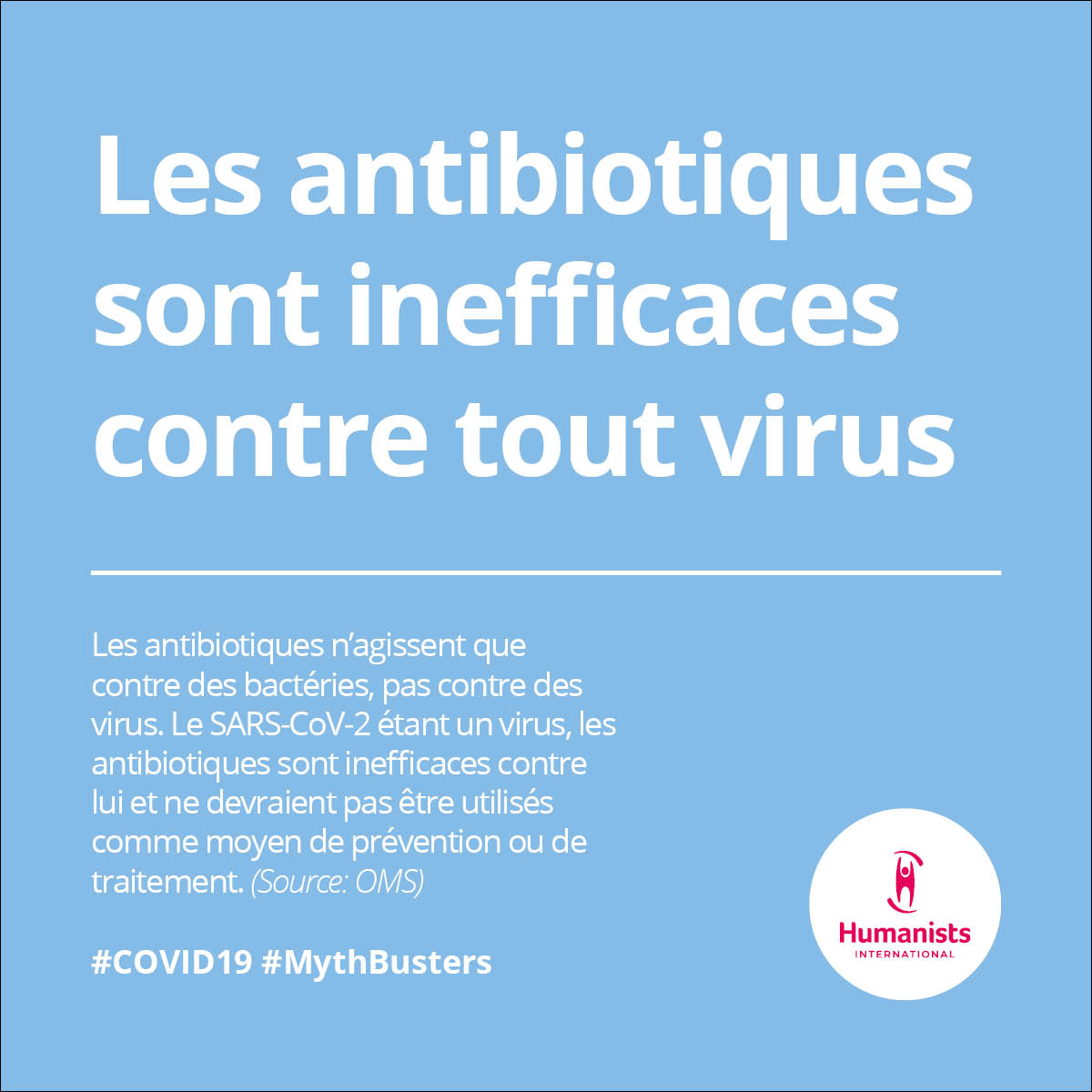 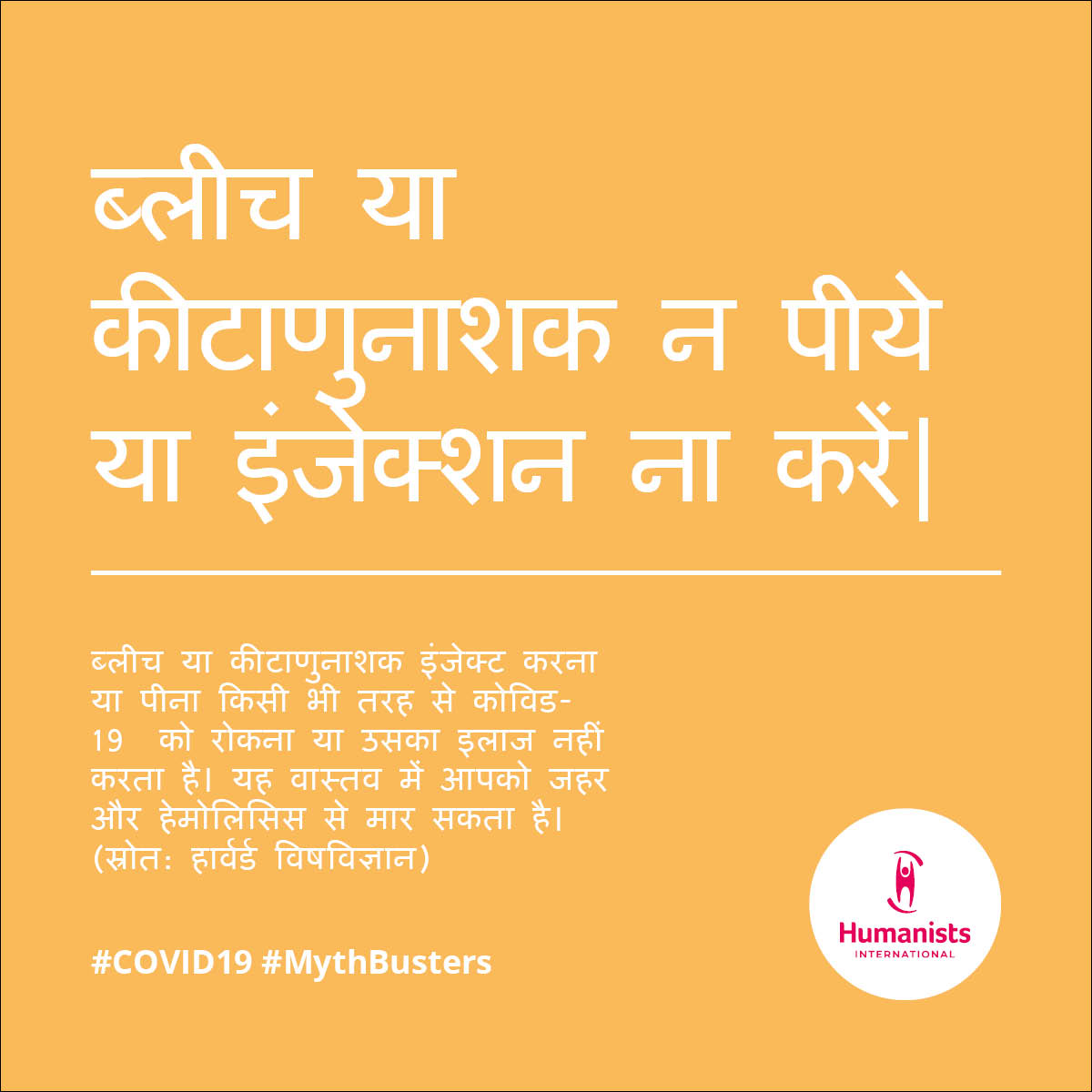 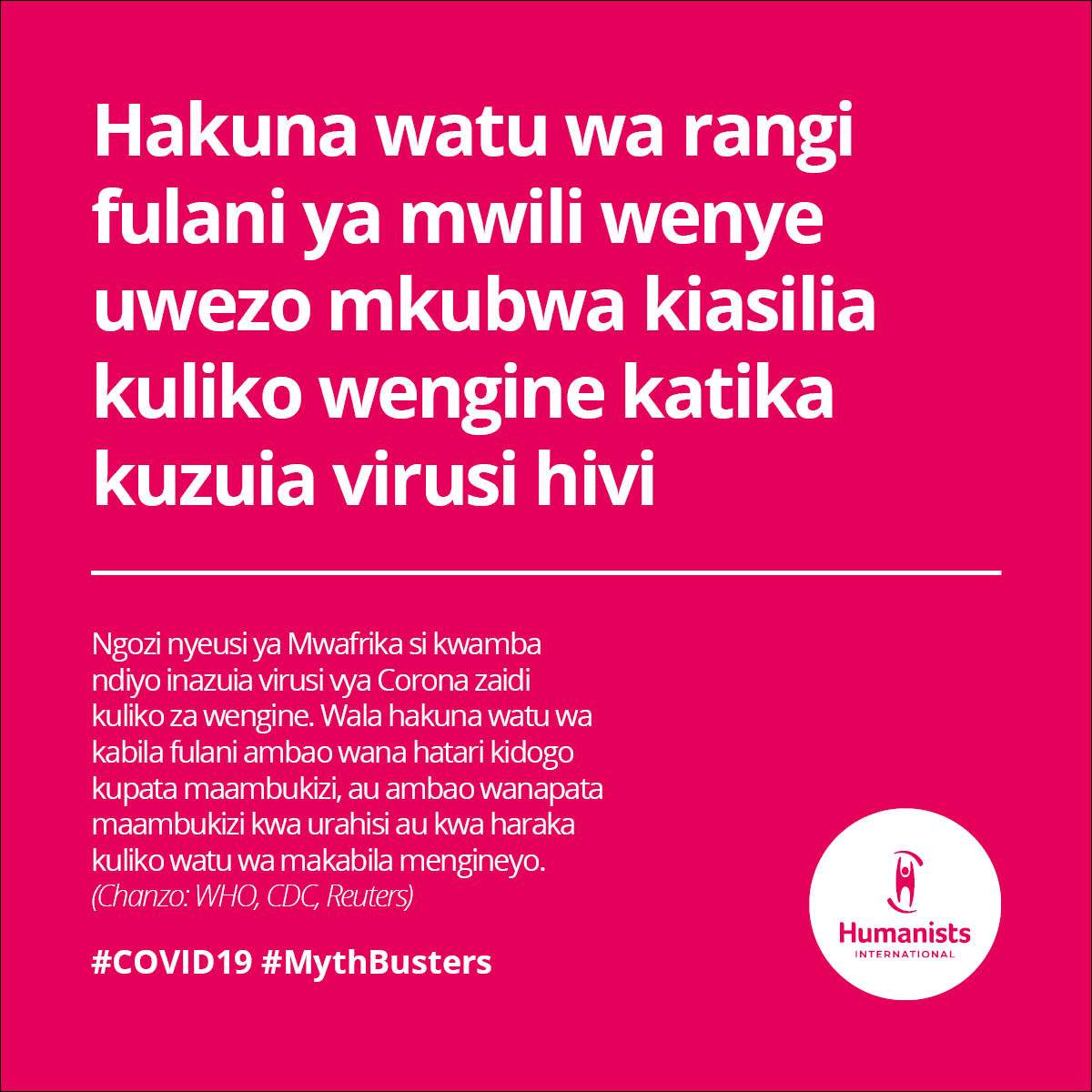 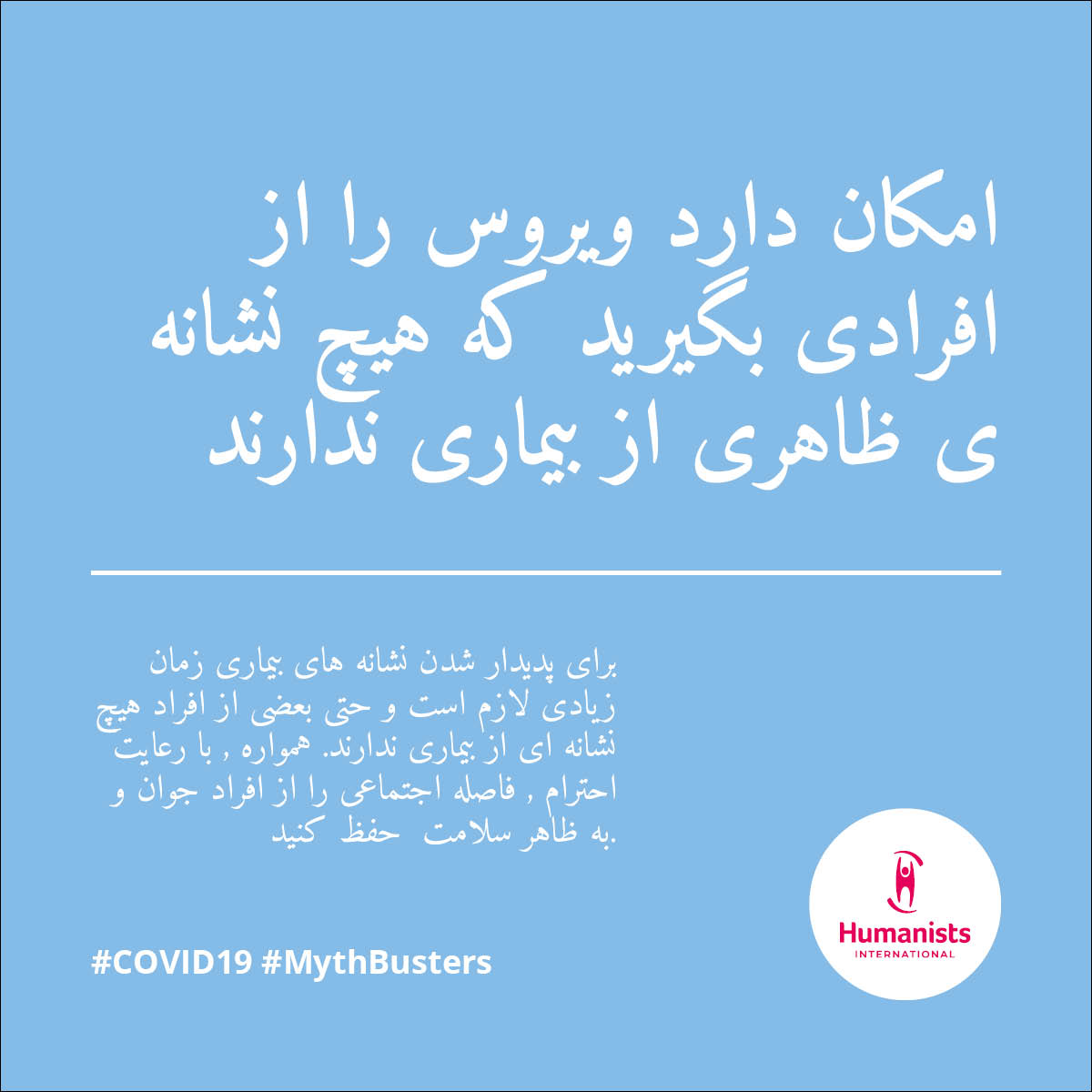 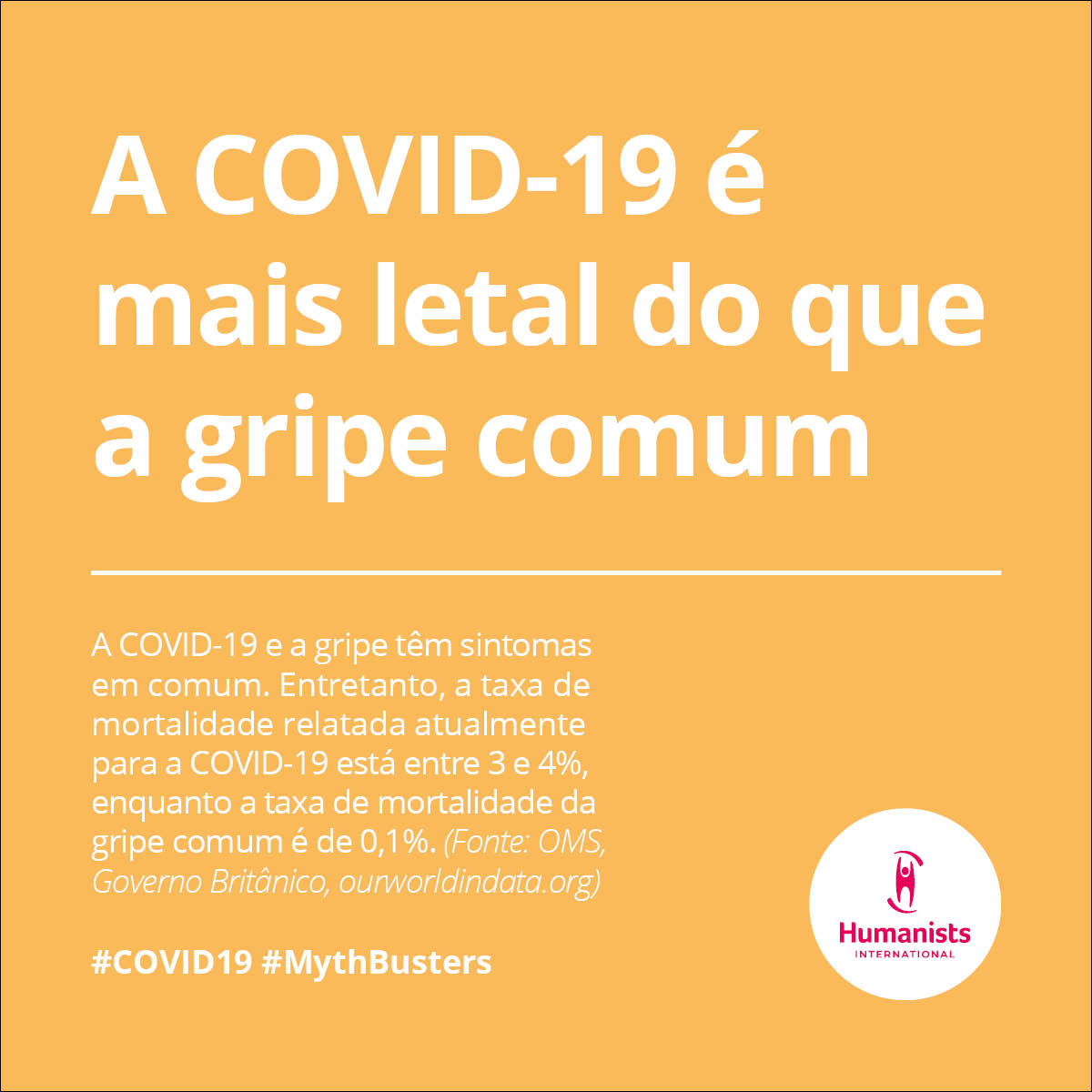 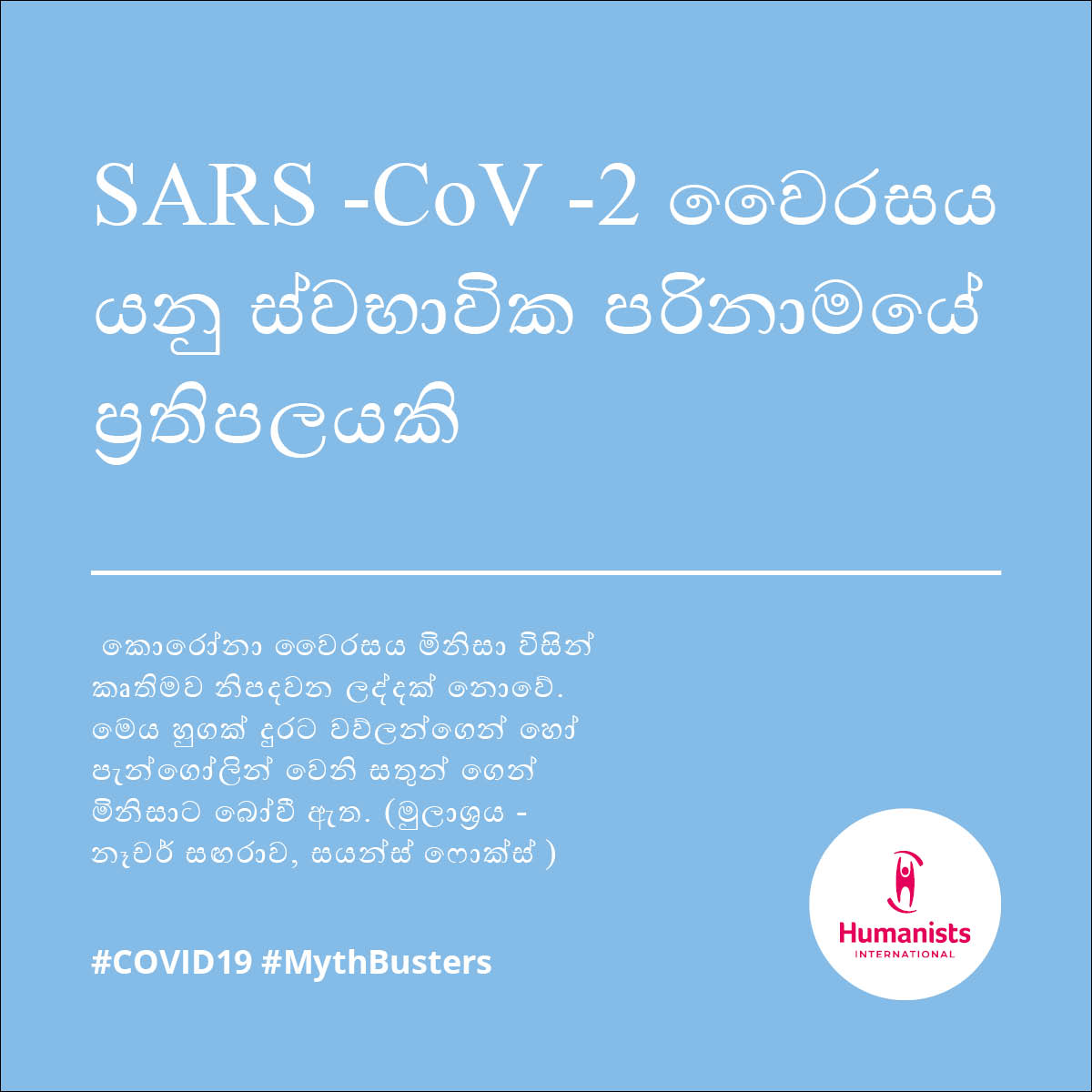 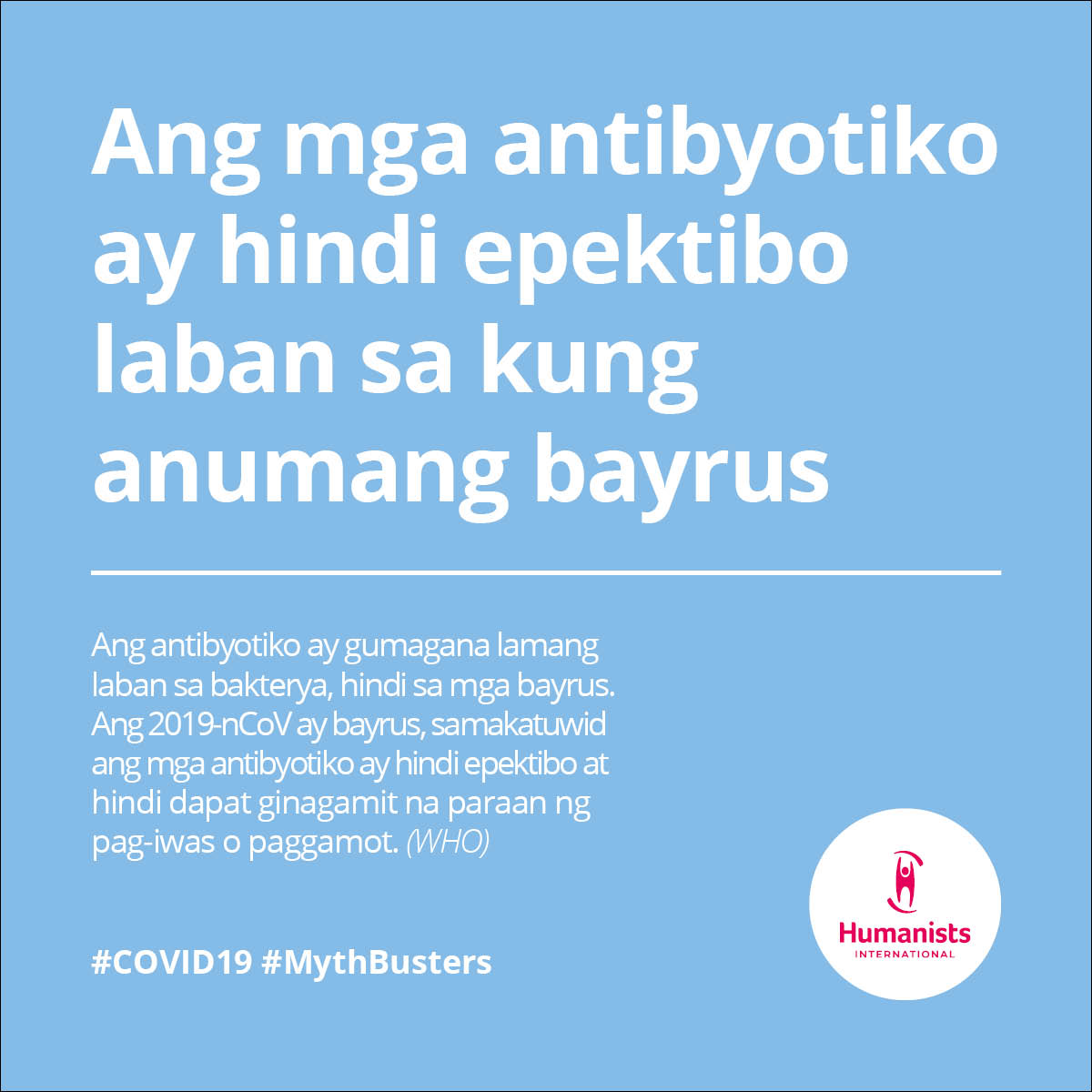 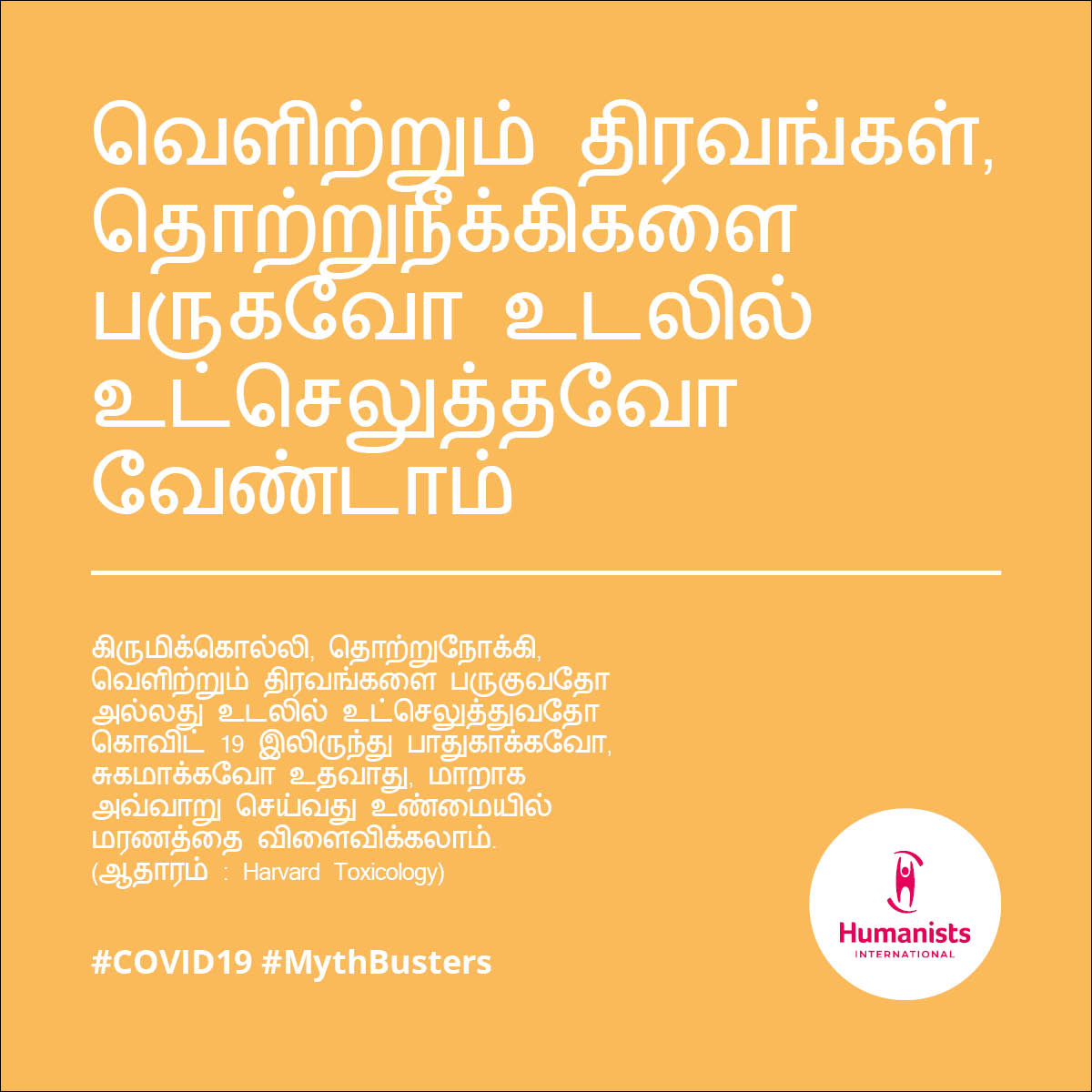 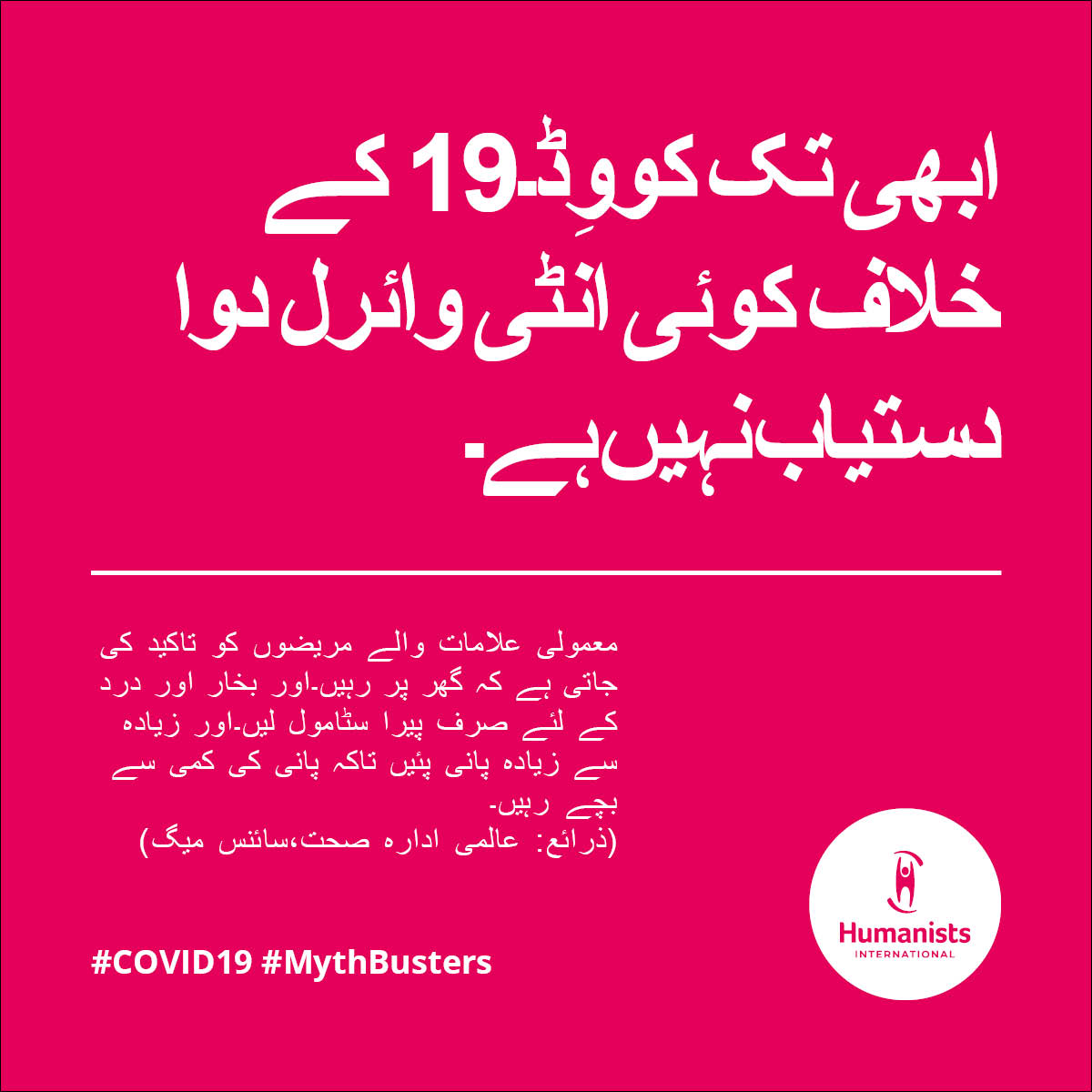 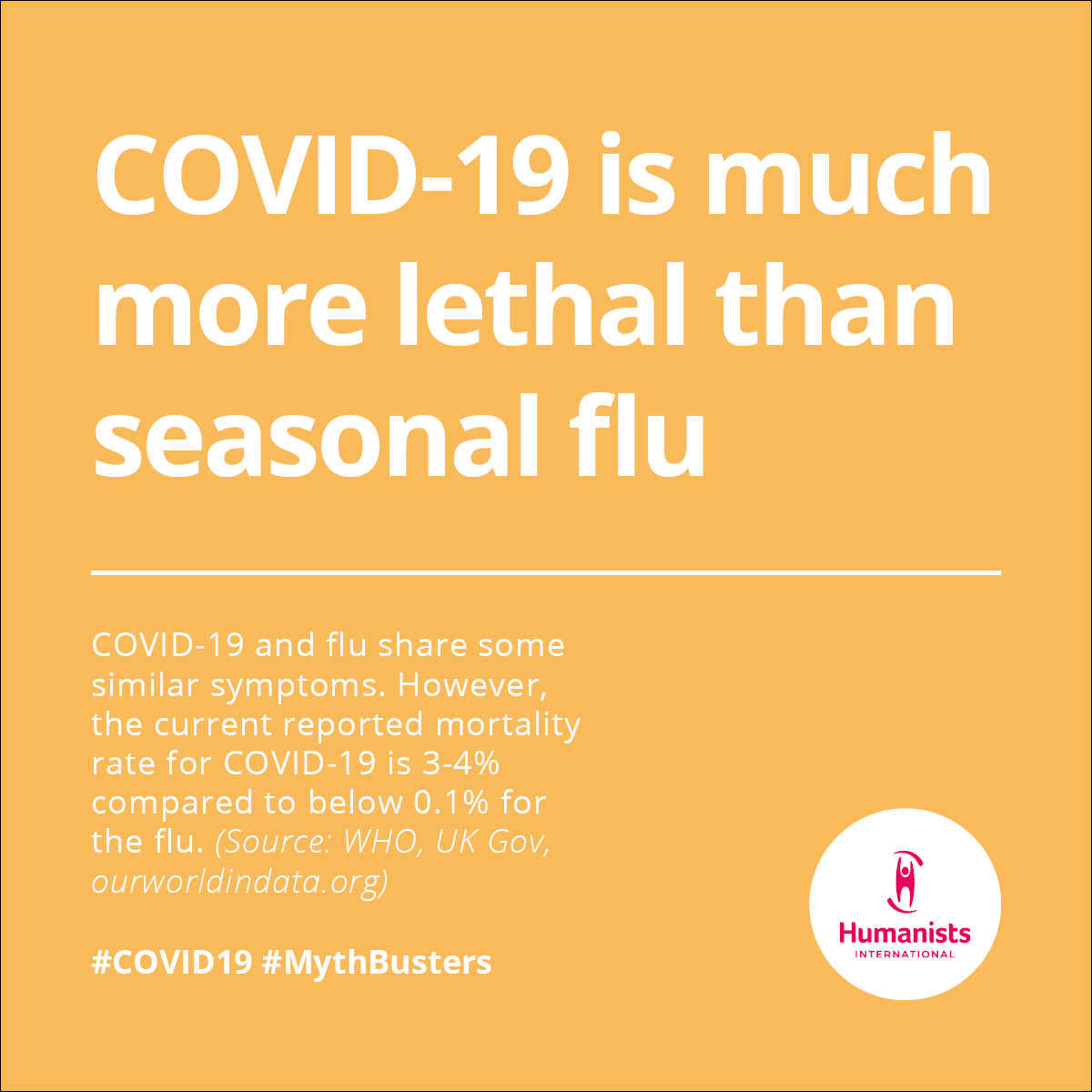 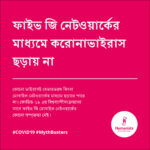 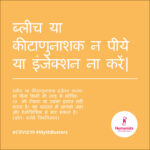 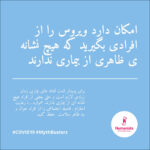 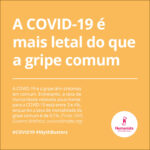 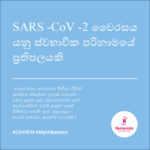 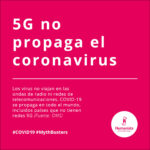 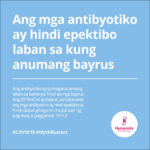 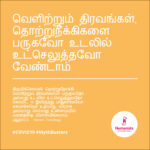 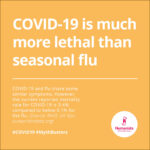 “Our goal”, said Giovanni Gaetani, Humanists International’s Membership Engagement Manager, “is to to reach out to a wider global audience, on a larger scale than we have ever done so before.”

“The amount of coordination and support coming from our Members and Associates is astonishing. In just one week we managed to translate the memes into 15 languages, including some of the most spoken languages around the world like Hindi, Spanish, French, Bengali, Portuguese, etc. We are literally talking about potentially reaching millions of people.

“As I speak, we keep receiving new translations and we are working to create further series of memes. Members and Associates all around the world are sharing the memes everywhere. Not only on social media, but also on Whatsapp groups, newsletters, etc. It’s hard to estimate accurately how many people we are reaching worldwide, but the feedback we are receiving is great.”

“This is a great example of global humanist cooperation in the name of reason, science and solidarity.”

If you want to contribute to the campaign with a new translation, please email membership@humanists.international first.