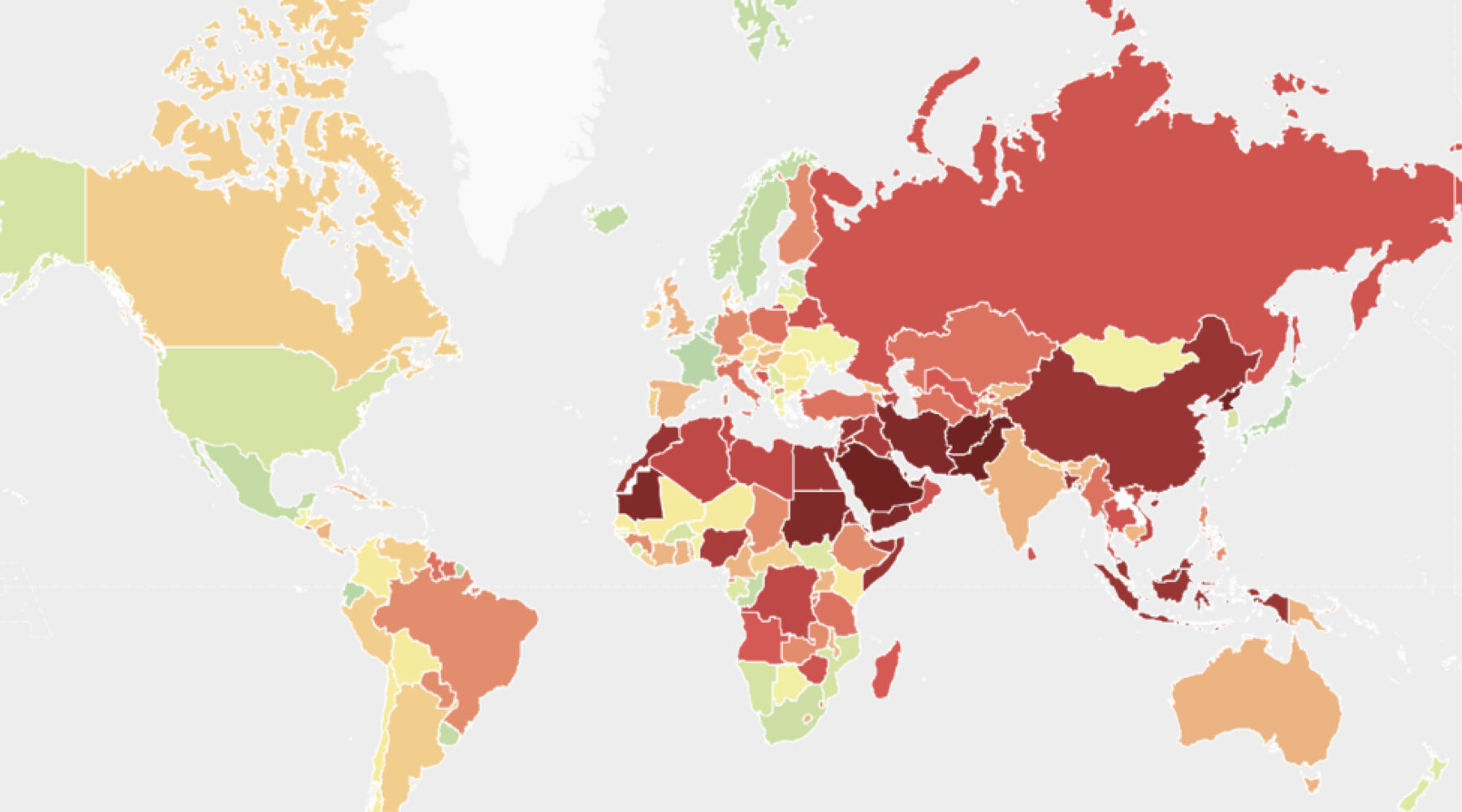 Launch of the Freedom of Thought Report 2020

Join us on 10 December for the launch of the ninth edition of the Freedom of Thought Report.

Since 2012 Humanists International has published the Freedom of Thought Report to monitor the rights and treatment of humanists, atheists and non-religious people in every country in the world.

This year, the thematic focus of the Report is COVID-19, and its impact on the non-religious people globally.

In particular we have seen the establishment of restrictions on:

Together with A C Grayling, Andrew edited the Wiley Blackwell  Handbook of Humanism (2015) and he is the author of Secularism:  Politics, Religion, and Freedom (Oxford University Press, 2017). He  has written on humanist and secularist issues for The Guardian,  The Independent, The Times, and New Statesman as well as for  various journals.

Andrew has represented Humanists UK and the humanist  movement extensively on national television including on BBC, ITV,  Channel 4, and Sky, as well as on programmes such as Newsnight,  The Daily Politics, Sunday Morning Live, and The Big Questions. He  has also appeared on BBC radio programmes such as the Today  programme, You and Yours, Sunday, The World Tonight, The World  at One, The Last Word, and Beyond Belief as well as on other local  and national commercial radio stations.

He is a former director of the European Humanist Federation (EHF)  and is currently a trustee of the International Humanist Trust. He  has previously served as head of the IHEU delegation to the Council  of Europe in Strasbourg and has represented humanist organisations at the United Nations and the Organisation for  Security and Cooperation in Europe (OSCE).

He has advised on humanism for the Qualifications and Curriculum  Development Authority, the Department for Children, Schools, and  Families, the BBC, the Foreign and Commonwealth Office, the  Home Office, and the Office for National Statistics. For ten years,  Andrew was a member and then Chair of the Westminster Standing  Advisory Council on Religious Education. He was a member of the  Advisory Group for the Humanist Library at London’s Conway Hall  and, in a previous post in the office of Lord Macdonald of  Tradeston in the House of Lords, he provided the secretariat for the  All Party Parliamentary Humanist Group (APPHG).

UN Special Rapporteur on Freedom of Religion or Belief

Ahmed Shaheed assumed his mandate as Special Rapporteur on freedom of religion or belief on 1 November 2016.

Mr. Shaheed is Deputy Director of the Essex Human Rights Centre. He was the first Special Rapporteur of the Human Rights Council on the situation of human rights in the Islamic Republic of Iran since the termination of the previous Commission on Human Rights mandate in 2002.

A career diplomat, he has twice held the office of Minister of Foreign Affairs of Maldives. He led Maldives’ efforts to embrace international human rights standards between 2003 and 2011.

In 2015, Mr. Shaheed won the UN Foundation Leo Nevas Human Rights (Global Leadership) Award. In 2010, he was granted a Presidential Medal of Gratitude by Albania and in 2009, he was recognized as the Muslim Democrat of the Year by the Centre for the Study of Islam and Democracy.

Mohamed Cheikh Ould Mkhaitir is a Mauritanian blogger who was a political prisoner from 2014 to 2019. He was sentenced to death for ‘apostasy’ after he wrote an article critical of Islam and the caste system in Mauritania, after which he became a designated prisoner of conscience by Amnesty International. Humanists International launched a campaign in 2014 to advocate for his release, and following a 6-year campaign were involved in negotiating his release with authorities in Mauritania.

Following the publication of the post on social media, mass protests calling for Mkhaitir’s execution for ‘blasphemy’ took place across the country. At one of these protests, the Mauritanian president addressed the crowd sympathetically, in apparent defense of Islam against supposed ‘blasphemy’.

Following his original one-day trial, and several delayed legal proceedings with various irregularities over the years, the charges against Mkhaitir were finally dropped following a final appeal court hearing on 9 November 2017.

He now lives in exile in France due to concerns for his safety.

Debbie Goddard has over two decades of experience as an organizer and activist. She became involved with the secular movement as a college student in 2000 and attended atheist, freethinker, humanist, and skeptic group meetings in Philadelphia, New York City, New Jersey, and central Pennsylvania. Her involvement increased over time: she served on local advisory boards, started a student group, edited a monthly campus
freethought email newsletter, and held a work-study position at the Center for Inquiry’s office in Rockefeller Center. In 2002, she was recognized in a Beliefnet “Godless Who’s Who” list as “The Student
Activist” and in the Washington Blade as an “out” nonbeliever.

She began working in the Department of Campus & Community Programs at the Center for Inquiry in Amherst, NY, in 2006. After serving as a field organizer and as campus outreach coordinator, she became Outreach Director in 2012 and managed CFI’s U.S. branches and the international student outreach program. She also directed African Americans for Humanism. In 2012, she led a notable billboard and ad campaign featuring black atheists, and in 2009, she coordinated an international campaign highlighting blasphemy laws and free expression. Additionally, she was the lead organizer for the Women in Secularism 4 conference and the annual CFI Leadership Conference.

Debbie is also engaged in LGBTQ activism, civil rights work, and training new organizers in her community. She facilitates workshops and gives presentations on campaign-building, evidence-based activism, diversity and outreach, group organizing, humanism and politics, and other topics for community groups, campus groups, and national conferences across North America.

Commissioner of The United States Commission on International Religious Freedom

Frederick A. Davie is the Executive Vice President of the Union Theological Seminary in the City of New York, where he serves as an advisor to the President for the structure and administration of the executive office, strategic planning, institutional advancement, and vision implementation. He is also the chief administrative officer at the Union Theological Seminary. He came to Union from the Arcus Foundation, where he served as Interim Executive Director and Senior Director of the Social Justice and LGBT Programs.

Davie served on President Barack Obama’s transition team, performing agency reviews for faith-based and community initiatives, and accepted an appointment by President Obama to the White House Council on Faith-based and Neighborhood Partnerships. As a member of the White House Council, he provided counsel on strategies for more effective partnerships between federal agencies and community and faith organizations.
Davie provided leadership for the inclusion of non-traditional families and marginalized populations in policy formation.

He has long been an active member of the New York City community through service as Chair of the Civilian Complaint Review Board (CCRB), a member of Mayor Bill de Blasio’s Clergy Advisory Council (CAC), co-convenor of the CAC’s public safety committee (with a focus on community safety and improving police-community relations), and a number of leadership roles in public administration for the City of New York, including Deputy Borough President of Manhattan, and Chief of Staff to the Deputy Mayor for Community and Public Affairs, and Chief of Staff to the President of the NYC Board of Education.

Davie holds a B.A. in Political Science from Greensboro College ’78. Dean’s List and the Harold H. Hutson Award; and an M.Div. from Yale University’s Divinity School ’82, where he was a Benjamin E. Mays Fellow of The Fund for Theological Education and President of Yale Black Seminarians, and recipient of Yale Divinity School’s Distinguished Alumnus Award for Community Service. Davie was also a Charles H. Revson Fellow at Columbia University, ’90.

The event will be live-streamed on Facebook on 10 December at 15.00 UTC.

No registration is needed. Access is free. We are going to share the link of the live streaming with you in due time.

Confirm your participation
to the event on Facebook now!