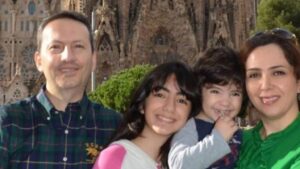 Dr. Djalali is a Swedish-Iranian researcher sentenced to death in Iran on false charges of espionage and “spreading corruption on earth”. In 2016, he was arrested and charged while he was in Iran attending a series of academic workshops. During his imprisonment, he has been subjected to intense psychological torture and forced to sign statements under threats of execution. He has also repeatedly been denied access to his lawyer.

Iranian “elections” context: The new Iranian president Ebrahim Raisi represents the hard-line segment of the regime in Iran. When Raisi was Tehran’s deputy prosecutor in 1988, he was implicated in executing thousands of prisoners. Amnesty International has called for Raisi to be investigated for crimes against humanity. The rise of Raisi raised concerns about how Dr. Djalali’s case would be handled moving forward.

July
The European Parliament passed a resolution citing Dr. Djalali’s imprisonment and torture as grounds for sanctions against Iranian officials. The EU Parliament called for his immediate release and further sanctions on Iran.

14 Academic and rights groups issued a joint statement stressing the severity of Dr. Djalali’s situation and his deteriorating health. The statement pointed to the concerning developments in his case and called on the European Union, European state governments, United States government officials to secure Dr. Djalalis’s release.

April
On 14 April, authorities transferred Dr. Djalali to a multiple-occupancy cell where he is not at imminent risk of being executed. Dr. Djalali had spent around 6 months in solitary confinement where his execution could take place any moment.

COVID-19 context: Iran is one of the countries worst affected by the coronavirus outbreak. According to official statistics, more than 60,000 Iranians have contracted the virus and over 4,000 have died, though some researchers believe the real figures to be up to ten times higher. Independent media and human rights organizations have reported that inmates from several prisons have tested positive for the virus. Protests in prisons over the lack of coronavirus safety measures have been met with a deadly response. Amnesty International reports that, since February 2020, over 30 incarcerated individuals have been killed during prison protests. While the Iranian government has in recent weeks furloughed or granted pardons in an effort to reduce the risk of coronavirus spreading throughout the prison population, in many cases the pardons have been arbitrarily applied and have not extended to many individuals, such as Dr. Djalali, who have been imprisoned on national security grounds.

November
On 24 November, Dr. Djalali phones his wife Vida Mehrannia with the message that he has to say goodbye; he had been placed in isolation and informed that he would soon be executed. On 25 November, Dr. Djalali’s lawyer confirmed that Iranian officials have officially written a letter saying that they will carry out the death sentence against him.

March
Scholars At Risk issue a statement calling on Iranian authorities to release Dr. Djalali in light of the coronavirus pandemic.

July
Dr. Djalali is transferred to a secret detention facility. The authorities have concealed his location from his family. He is placed under great pressure to ‘confess’ to new crimes.

May
Since his arrest, Dr. Djalali has lost 24kg and is in need of urgent medical care. Following his repeated hunger strikes he is experiencing a number of health problems, including fainting, blood in the urine, kidney issues, heart, and stomach pains.

February
A specialist discovers that Dr. Djalali’s bone marrow cells have severely weakened, indicating a high possibility of leukemia. Dr. Djalali is scheduled to see a blood and cancer specialist at a hospital on 5 February 2019; however, prison authorities prevent him from going.

November
Dr. Djalali undergoes surgery for a hernia. He is transferred back to prison two days after his surgery, contrary to medical advice that he should remain in hospital to recover.

February
Dr. Djalali’s lawyers learn that the Supreme Court has summarily affirmed his sentence, without allowing them to submit a defence. His death sentence can now be carried out at any time. In response, UN rights experts repeat their urgent call to Iran to drop the death sentence against Dr. Djalali.

December
UN human rights experts call on Iran to drop the charges against Dr. Djalali and to release him. Iran state media shows a video of Dr. Djalali’s forced confession on state television.

November
The UN Working Group on Arbitrary Detention issues an opinion finding that Dr. Djalali’s deprivation of liberty is arbitrary.

October
Dr. Djalali is sentenced to death for the crime of “spreading corruption on earth” (efsad- fel-ard) after a standing trial before Branch 15 of the Revolutionary Court in Tehran. The court verdict alleged that Dr. Djalali had worked as a spy working for Israel. His conviction was based on several “confessions” obtained under torture while he was in solitary confinement.

August
In a letter written from inside prison, Dr. Djalali writes that he suspects he is being targeted due to his
earlier refusal to use his connections in European academic institutions to spy on Iran’s behalf.

February
Dr. Djalali stops his hunger strike, only to resume it 3 days later after a judge orders him to change his appointed lawyer.

January
Dr. Djalali is taken before Branch 15 of the Revolutionary Court in Tehran, without his lawyer, and informed that he is accused of ‘espionage’ and could face the death penalty.

December
Dr. Djalali goes on hunger strike to protest his continued detention and denial of access to a lawyer.

April
Dr. Djalali attended an academic workshop by the University of Tehran and Shiraz University. Three days before he was due to return to Sweden, he was arrested without a warrant. He was held in an unknown location for a week before being transferred to Evin Prison, which is under the control of the Ministry of Intelligence. He is detained for 7 months, 3 of which he spent in solitary confinement.

Born in northern Iran on 15 September 1971, Dr. Djalali is an Iranian-born citizen of Sweden who belongs to the Azerbaijani minority in Iran.

Dr. Djalali is an internationally renowned disaster medicine doctor and researcher. He lectured at universities in Italy and Belgium and partook frequently in international scientific collaboration.

His conviction follows a pattern of persecution of international academics who have traveled to the country to attend conferences or conduct research, and over the course of their stay are erroneously charged with espionage. See for example the cases of Kylie Gilbert-Moore, Fariba Adelkhah, Roland Marchal, Xiyue Wang

The Constitution of the Islamic Republic of Iran contains provisions which should protect freedom of thought, religion or belief (Article 23 in particular forbids “the investigation of individuals’ beliefs”, stating that “no one may be molested or taken to task simply for holding a certain belief”). However, this guarantee is frequently ignored in practice. Similarly, Article 20 guarantees equality before the law, but qualifies that this equality is subject to “conformity with Islamic criteria”, which in practice means that many groups face discrimination in law and the application of law.

In reality, freedom of religion or belief, and the freedoms of expression, association and assembly in the Islamic Republic of Iran are all severely restricted. Iranian law bars any criticism of Islam or deviation from the ruling Islamic standards. The authorities sometimes use these laws to persecute religious minorities and government critics.

Article 110 of the Constitution lists all the powers granted to the Supreme Leader (a Muslim religious and political leader), appointed by his peers for an unlimited duration. Among others, the SupremeLeader exercises his control over the judiciary, the army, the police, the radio, the television, but also over the President and the Parliament, institutions elected by the people. Article 91 of the Constitution establishes a body known as the “Guardian Council” whose function is to examine the compatibility of all legislation enacted by the Islamic Consultative Assembly with “the criteria of Islam and the Constitution” and who can therefore veto any and all legislation. Half of the Guardian Council are appointed by the SupremeLeader and the other half are elected by the Islamic Consultative Assembly from among the Muslim jurists nominated by the Head of the Judicial Power (who is, himself, appointed by the SupremeLeader).

The Guardian Council exercise a double control of any draft legislation, with two different procedures: conformity with the Constitution (all 12 elected members vote, a simple majority recognizes the constitutionality) and conformity with Islam (only the six religious leaders elected personally by the Sumpreme leader vote, and a simple majority is required to declare the compatibility of a draft legislation with Islam). Consequently, four religious leaders may block all draft legislation enacted by the Parliament. The Guardian Council and the Supreme Leader thus centralize all powers in Iran.

Iran operates a harsh form of Sharia—Islamic law—under which a wide range of political, social and moral offenses may be punishable with flogging, amputation, or execution. Amendments to Iran’s Penal Code in 2013 eliminated execution by stoning. However, Iran still carries out hundreds of executions by hanging every year. Many executions are for the crime of “enmity against God” (moharebeh). It is sometimes argued that Moharebeh applies only in cases of armed aggression against the state, however there are reports that this law is sometimes used against political opposition, religious minorities and protesters where terrorism or armed conflict are not necessarily present; or where there are instances of alleged torture in connection of those imprisoned under this law.

“Enmity against God” and blasphemy

The government jails and periodically executes dozens of individuals on charges of “enmity against God” (moharebeh). Although this crime is framed as a religious offense, and may be used against atheists and other religious dissenters, it is most often used as a punishment for political acts that challenge the regime (on the basis that to oppose the theocratic regime is to oppose Allah).

In 2021, the President passed amendments to the Penal Code regarding “insulting legally-recognised religions and Iranian ethnicities”. Translations of the articles provided are as shared by Article 19.

Article 499: “Anyone who insults Iranian ethnicities or divine religions or Islamic schools of thought recognised under the Constitutions with the intent to cause violence or tensions in the society or with the knowledge that such [consequences] will follow”

Article 499 carries a sentence of between six months to two years in prison and/or a fine. However, if the violation “leads to violence or tensions” harsher sentences of two to five years apply, and/or a monetary fine.

Article 500: “any deviant educational or proselytizing activity that contradicts or interferes with the sacred law of Islam” whether as part of a “sect” or through the use of “mind control methods and psychological indoctrination” The prescribed activities include “making false claims or lying in religious and Islamic spheres, such as claiming divinity.”

Article 500 carries a punishment of two to five years in prison, and/or a fine.

Humanists International believes that Dr. Djalali is being persecuted as a result of his refusal to spy for the Iranian regime, and calls for his conviction and death sentence to be quashed, as well as his immediate and unconditional release.

Humanists International is deeply concerned with Dr. Djalali’s health, especially in light of the physical and psychological torture to which he has been subjected.

Humanists international have followed Dr. Djalali’s case since 2017, publishing updates about him and participating in the worldwide efforts to release him.