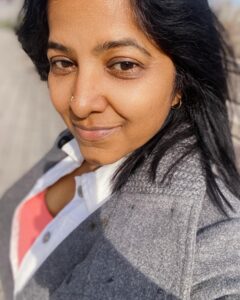 Leena Manimekalai is a published poet and award-winning filmmaker currently facing threats and judicial harassment after being accused of ‘hurting religious sentiments’ in connection with her depiction of the goddess Kali in her documentary short film.

On 20 January 2023, the bench ordered that Manimekalai not be arrested on the basis of existing or possible future complaints filed against her in relation to the film, and that the multiple existing FIRs should be combined.

According to media reports, Chief Justice of India DY Chandrachud stated that, “[t]he submission is that there is no intent to hurt religious feelings. The object of the film was to depict the goddess in an inclusive sense. At this stage, it may be noted that the lodging of FIRs in multiple States may be of serious prejudice.”

Having been selected to produce a creative piece on multiculturalism in Canada as part of the national level academic programme ‘Under the Tent’ organized by CERC Migration – Toronto Metropolitan University. Her project, ‘Kaali’ was exhibited at Aga Khan Museum on 2 July 2022.

That same day, Manimekalai shared the film’s poster on her Twitter account. The image went viral and sparked a backlash online. Manimekalai began receiving death threats, members of her team and family were doxxed, and the hashtag #arrestleenamanimekalai began trending on Twitter India.

Leena Manimekalai, an atheist, is a published poet and award-winning filmmaker. Her works, whether film or literary, promote human rights, particularly those of marginalized people, such as the Dalit or LGBTI+ community. Her fifteen narrative documentaries have covered such topics as caste, gender, globalization, art therapy, student politics, eco-feminism, indigenous rights and LGBTI+ rights. As a result of her work, Manimekalai has received the Charles Wallace Art Award (2012) in Visual Ethnography, the EU Fellowship in Media and Conflict Resolution (2005), and a Commonwealth Fellowship for her work in cinema and gender (2009).

Manimekalai is no stranger to harassment and censorship. In 2011, she successfully challenged a Censor Board of Film Certification (CBFC) decision not to certify – and therefore deny the release of – her debut feature film Sengadal: The Dead Sea (2011), which highlighted the plight of fishermen from India who unknowingly stray into Sri Lankan waters. The film subsequently won a Network of Women Film Festivals Award in Tokyo and played at the International Film Festival of India, after overturning a ban.

In 2019, her second film “Maadathy, an unfairy tale” about the “unseaable” caste group in southern Tamilnadu also was refused certification by the regional Censor Board. Manimekalai once again successfully appealed to the tribunal to ensure that the film was certified without any edits. The film got its world Premiere at the Busan International Film Festival in 2019.

Her feature documentary, “White Van Stories” (2015), which addresses enforced disappearances in Sri Lanka, that was broadcast in Channel 4, is banned in Sri Lanka.

She has also faced calls to ban the publication of her poetry. She was accused of ‘blasphemy’ in relation to her 2007 poetry collection Ulagin azhagiya muthal penn (translating to “the first beautiful woman of the world”) and her blog of the same name, with copies of the book burned in public.

The Indian Penal Code provides an array of vaguely-worded or overbroad laws, which enable complainants to stifle criticism of religion. Among them, “blasphemy” laws are being increasingly used and cited.

Section 295 of the Indian Penal Code criminalizes “insulting religious beliefs”; it allows up to three years’ imprisonment and fines for “whoever, with deliberate and malicious intention of outraging the religious feelings of any class of citizens of India, by words, either spoken or written, or by signs or by visible representations or otherwise, insults or attempts to insult the religion or the religious beliefs of a class.”

In January 2015, the well-received and record-breakingly high-grossing Bollywood film titled “PK“, satirized problems with religion through the eyes of an alien in human form. It was criticized by Hindu nationalists who disliked its satire on “godmen” and called for a ban on the film and a the arrest of its star Aamir Khan and the filmmakers.

Director and writer Rajkumar Hirani responded by explaining, “In fact, with PK, I am saying that we are humans first and not Hindus or Muslims. Everyone should have the freedom to live and get settled with whoever they want to”.