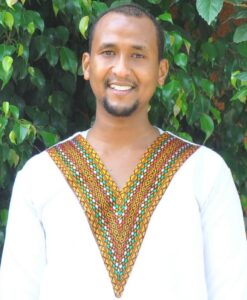 Mahmoud Jama Ahmed is a Somali academic who is currently living in exile. He was a professor of humanities and social sciences at the University of Hargeisa who was given a presidential pardon for previous charges of blasphemy, but who remains at high risk of attack from fundamentalist religious groups and vigilantes.

April
Mahmoud Jama Ahmed confirms that he and his family have finally resettled to a safe country, where they hope to rebuild their lives.

March
Ahmed and his family fled Somalia to a neighbouring country, where they were forced to live in hiding for their own safety.

February
Ahmed was the subject of a series of violent threats by a local preacher. In the recording, the imam says that no repentance should be accepted from Mahmoud because he is an apostate and an apostate must be killed even if they repent. He also said killing Mahmoud is good for him because he will benefit from that in the afterlife.

January
Ahmed receives a presidential pardon, and is released from prison after spending about 307 days in jail, on the conditions that he may not practice any clerical activity. Mahmoud is also suspended from working at the university for five years. He stays at home for fear of vigilante attack.

July
An appeal by the prosecution to increase Ahmed’s sentence from two-and-a-half years in prison to death is heard and rejected by the appellate court. Ahmed’s conviction is upheld.

April
Ahmed is sentenced to two-and-a-half years in prison for ‘blasphemy’ following a psychiatric assessment. He is subjected to physical harassment and discrimination by prison authorities.

March
Ahmed published a post on Facebook, where he asked “1. If prayers are answered by God, why does every year drought happen to us? 2. Why do western countries get rain without praying, do they make “artificial rains”?”.

This produced a strong response from many people, because there were words in the post that were interpreted as “insulting the divine self” and ridiculing religious rituals such as prayer. The post was widely interpreted as an act of blasphemy. He began receiving threats to his life, and on 21 March, was arrested by the police and detained at the Central Investigation Department (CID).

Ahmed contends that he was arrested without the court’s permission, and subjected to ill-treatment during his detention for about 40 days. During the detention, Mahmoud asserts that a security guard armed with a machine gun directed his weapon towards him asking for immediate repentance, or else he would be shot.

The Investigation Department confiscated his personal computer and smartphone, and searched all the data contained within them without a court order.

February
Ahmed publishes a book entitled, Are You Free?

Mahmoud Jama Ahmed worked as professor of humanities and social sciences at the University of Hargeisa between 2013 and 21 March 2019. In addition, he has written several books about politics. He is the author of a book named What is the Obstacles for Somalis in terms of State Formation and Development? (2018), Political Islam (2018), Enlightenment (2016), as well as Basic Civic Education (2014), and Are you free? (2019).

Over the course of his career, Mr Ahmed has become a progressively more familiar figure within Somali society as a result of his political activism and writings. As a recognised public figure, Mr Ahmed has appeared on talk shows on numerous occasions.

In 2012, he was the National Party’s candidate for Mayor of Hargeisa. In 2012, Mr Ahmed also published a book about the development of Hargeisa called My Vision for the Development of Hargeisa in Five Years 2012-2017, which later became the foundation for his campaign programme. During this time he was also diligently vocal about tribalism and discrimination in Somaliland. Through means of lobbying, he was able to collect five thousand signatures expressing support for his three bills regarding tribalism and discrimination. Mr Ahmed’s initiative was unprecedented and, to this day, he is the only individual that has been able to present his bills to the Secretary-General of the Parliament.

Somalia has lacked an effective central government for decades. The ousting of President Siad Barre in 1991 precipitated a decades-long civil war between rival factions and the disintegration of central authority, which the terrorist group Al-Shabaab was able to make significant territorial gains. Al-Shabaab imposes a strict version of Sharia law in areas under its control, including the death penalty for apostasy, blasphemy and adultery.

The former British Somaliland declared independence in 1991, and the region of Northern Puntland similarly broke away in 1998.  Only in 2012 did efforts to restore central authority make significant progress, with the formation of the first parliament in more than 20 years, and the holding of the first presidential election since 1967.

99.7% of the population of Somalia is Sunni Muslim, with the remaining less-than-1% comprising a small Christian community of approximately 1,000 individuals, a small Sufi Muslim community, and an unknown number of Shia Muslims, Hindus, Buddhists, Jews, humanists, atheists and other non-religious individuals.

The terrorist group Al-Shabaab remains a major impediment to peace, attacking the Somali government and all “enemies of Islam” in recent years, harassing and killing persons suspected of converting from Islam, and maiming and killing those who fail to adhere to its edicts under territory it controls. Having pledged allegiance to Al-Qaeda, in 2015 some senior figures now appear to have aligned with ISIS. The group’s mission is to create a fundamentalist Islamic state in the Horn of Africa that would encompass Somalia, Djibouti, Kenya, and Ethiopia.

While the group has suffered considerable loss of territory, and seen numerous high-level defections, it remains active and in control in some rural areas, having established effective ‘local government’ including in some cases tax systems, infrastructure projects, and services not provided by the legitimate government. Al-Shabaab carried out a record number of terrorist attacks in 2019, mostly against civilians, non-Muslims, members of the government and the African Union Mission to Somalia (AMISOM). The Mayor of Mogadishu was killed in one such attack in August 2019.

The Provisional Federal Constitution prohibits (under Articles 2 and 17) the “propagation” of any religion other than Islam.

While the provisional federal constitution does not explicitly prohibit apostasy, it does state that Shariah law takes precedence over federal law (and Shariah law forbids conversion from Islam).

Both Puntland State and Somaliland have their own constitutions that also claim to provide some protection for religious freedom, though both documents prohibit apostasy, conversion from Islam, and propagation of religions other than Islam.

The Puntland Constitution, adopted by a constituent assembly in 2012, states that no one can be forced to adhere to a faith different from one’s own beliefs. However it also prohibits apostasy for Muslims and propagation of any religion other than Islam. The Puntland authorities interpret this section of the Puntland Constitution to mean that conversion from Islam to other religions is prohibited.

The Somaliland Constitution protects the right of freedom of belief. However, it states that Islamic law does not accept Muslim apostasy, prohibits preaching in a mosque on “matters that would divide the nation,” and prohibits the promotion of any religion other than Islam. Somaliland authorities interpret this portion of the Somaliland Constitution to mean that conversion from Islam to other religions is prohibited.

Al-Shabaab adopts its own interpretation of Shariah law and routinely executes both people of non-Muslim faiths and converts from Islam.

The penal code developed in 1963 applies to all regions of the country. Article 313 criminalizes blasphemy and imposes a punishment of 2 years in prison, stating:

Separately, in the section in the Penal Code concerning ‘morals and decency’, Article 559 imposes a fine for blasphemy, stating:

“(1) Whoever publicly blasphemes, with invectives or insulting words, the Deity or the symbols of the person venented in the religion of the State shall be punished with fine [99. PC) from Sh. So. 100 to 3,000.”

In areas controlled by al-Shabaab there remains a high risk that criticism of Islam, or the militant group, let alone any statement or act perceived as ‘blasphemous’, could result in an unlawful execution under the auspices of al-Shabaab.

Humanists International and other civil society groups consider Mahmoud Jama Ahmed a victim of persecution on grounds of expression as a human rights defender.