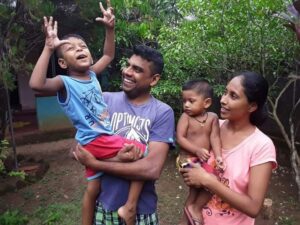 Award-winning Sri Lankan writer, Shakthika Sathkumara, faced accusations of having hurt the religious feelings of Buddhists and advocated hatred in connection with a short story that he had published on his Facebook page.

Arrested on 1 April 2019, he was arbitrarily detained for 127 days while police conducted their investigation. Despite the completion of their investigation on 25 June 2019, Sathkumara was forced to wait for almost two years for the decision of the Attorney General as to whether his case would go to trial.

February
On 9 February 2021, the case against writer and rationalist, Shakthika Sathkumara, was finally dropped, 22 months after his original arrest.

May
On 22 May 2020, the United Nations Working Group on Arbitrary Detentions issued an opinion that Sathkumara’s 127-day detention was arbitrary and in contravention of Sri Lanka’s international human rights obligations.

Multiple hearings of both his case before the Magistrate’s court and his Fundamental Rights petition are postponed over the course of the year.

On 25 February, the Buddhist Information Centre lodge a complaint against Sathkumara with the Inspector General of Police.

March
On 6 March, Buddhist monks reportedly visited Sathkumara’s place of work where, he reports, he was threatened and subjected to verbal abuse.

Sathkumara is summoned for questioning on 25 March.

April
Sathkumara was arrested on 1 April 2019 on suspicion that he had committed offences under Section 291B of the Penal Code and Article 3(1) of Sri Lanka’s ICCPR Act (2007).

His arrest followed a complaint filed by the Buddhist Information Centre, which claimed that Sathkumara’s short story ‘Ardha’ (‘Half), published on Facebook, was derogatory and defamatory to Buddhism.

Sathkumara was taken to Polgahawela police station, where he was detained for 127 days. Following his arrest, he was placed on compulsory leave from his employment.

June
At a hearing held on 25 June 2019, the police informed the court that their investigation has been concluded and the case has been referred to the Attorney General to render a decision as to whether to file charges against Sathkumara.

July
At its subsequent hearing on 9 July 2019, police appearing before the Polgahawela Magistrate Court informed the court that they had not yet been informed of the Attorney General’s decision.
Throughout subsequent hearings held before the magistrate over the course of 2019, police confirmed that they had not received instructions from the Attorney General.

August
Sathkumara was granted bail on 5 August 2019 by the Kurunegala High Court and was released from prison on 8 August 2019, after bail was duly furnished at Polgahawela Magistrate Court. The conditions of his bail are a 100,000-rupee (about $US575) cash guarantee and two sureties worth 200,000-rupees. Sathkumara is required to report to Polgahawela police on the second and fourth Sunday of every month.

September
At a hearing on 30 September 2019, Sathkumara’s fundamental rights case – filed on 29 April 2019 in order to challenge the legal validity of the charges being laid against him under the Sri Lankan Constitution – was postponed until 28 July 2020.

December
After eight months of being placed on administrative leave, Sathkumara was reappointed to his position on the condition that he may face a disciplinary inquiry in connection to his writing of ‘Ardha’. Such a warning comes despite the fact that regulations prohibit the administrative authorities from carrying out a disciplinary inquiry into a non-work related matter, according to his legal team. He is yet to be reimbursed for his loss of earnings incurred during his compulsory leave.

Rationalist writer Shakthika Sathkumara, is the author of seven short story collections, four poetry anthologies, a novel and at least 17 non-fiction books on literary theory, theatre art and Buddhism. He has won recognition at provincial and national levels for his short stories and poetry anthologies. Sathkumara is a regular contributor to the literary supplements of various Sinhala-language newspapers.

Sathkumara’s short story ‘Ardha’, offered a different rendering, told by the characters of the short story, of the legendary story of “Siddhartha” in Buddhist literature. Sathkumara maintains that he did not intend to insult Buddhism nor wound the feelings of any religious community in writing his short story, which is written in a post-modernist style.

Prior to his arrest, Sathkumara worked as an Economic Development Officer at the Polgahawela Divisional Secretariat Office.

Humanists International believes that Sathkumara was targeted for the peaceful exercise of his right to freedom of expression and calls on the Sri Lankan authorities to compensate him for the hardship he suffered over the intervening 22 months.

Since taking up the case in May 2020, Humanists International has advocated for the case against Sathkumara to be dropped, including raising his case at the Human Rights Council.