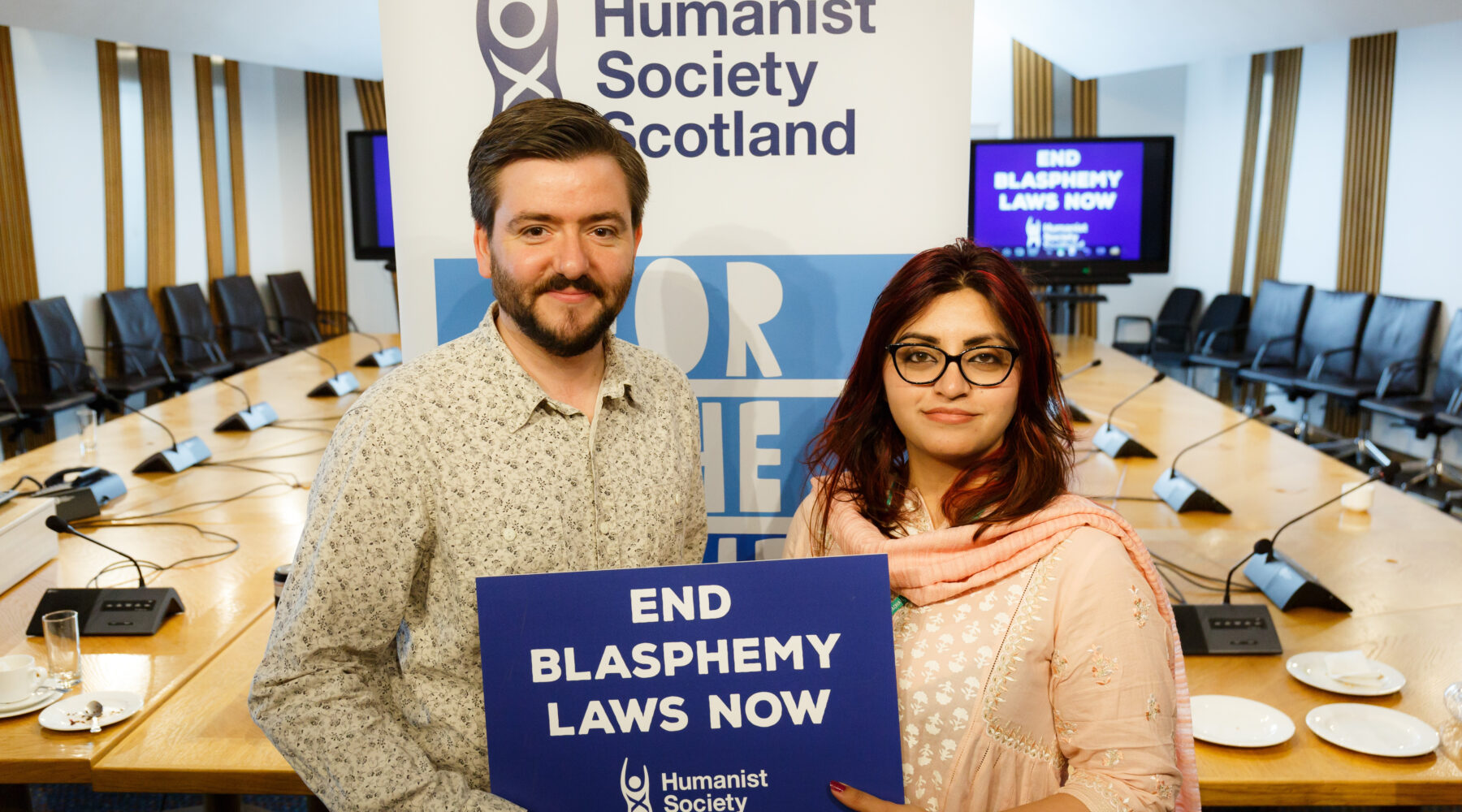 Forming a coalition against “blasphemy” laws

In the aftermath of a terrorist attack, we co-founded a campaign to End Blasphemy Laws worldwide.

A response to tragedy

We have always campaigned against "blasphemy" laws. But in the aftermath of the terrorist attack on the offices of the magazine Charlie Hebdo in January 2015, Humanists International and several other organizations wanted to redouble and pool their efforts to oppose "blasphemy" laws, in favour of freedom of expression.

With several organizations all considering new efforts at exposing the dangers of "blasphemy" allegations and the laws under which they are prosecuted, we co-founded an international coalition of rights groups, including freedom of expression advocates and groups including both religious and humanist or other non-religious perspectives.

By the end of that month the coalition was able to launch a new campaign site, hosted by Humanists International. The End Blasphemy Laws campaign uses data adapted from our Freedom of Thought Report to provide information on "blasphemy" used by activists around the world. With our coalition partners with continue to coordinate on campaign actions, aimed at abolishing "blasphemy" laws worldwide.

On 7 January 2015, the world was shocked by a terror attack in Paris. Two gunmen descended on the offices of the satirical magazine Charlie Hebdo, murdering 12 people.

It was certainly not the first and would not be the last outrage committed by Jihadists in the name of responding to perceived “blasphemy”. But it was an horrific reminder of how the whole concept of “blasphemy” is used by extremists as justification for terrorist violence. The same concept is encoded in laws prohibiting “blasphemy”, “religious offence” or the “hurt sentiments” of religious people, in more than 70 countries. Such laws are not only a violation of free expression in themselves, they lend a false legitimacy to the claim that “blasphemy” is a terrible crime, and under these laws many people face years of trial, long jail terms, or in some countries even a possible death sentence.

For these reasons, human rights groups have long contested “blasphemy” laws and called for their abolition. It’s always been an objective of Humanists International to oppose such laws and support their abolition.

In the year previous to the Charlie Hebdo atrocity, Humanists International had already been in discussion with the European Humanist Federation about running a campaign to repeal the remaining blasphemy laws in Europe. But in the aftermath of the Charlie Hebdo attack, we found a number of other organizations from various parts of the world also wanting to renew and channel their opposition to “blasphemy” laws. With two sets of organizations banding together, we proposed a new grand coalition, open to any organization that stood against “blasphemy” laws, including human rights groups, campaigners for freedom of expression, and any religion or belief groups opposed to restrictions on expression about religion. 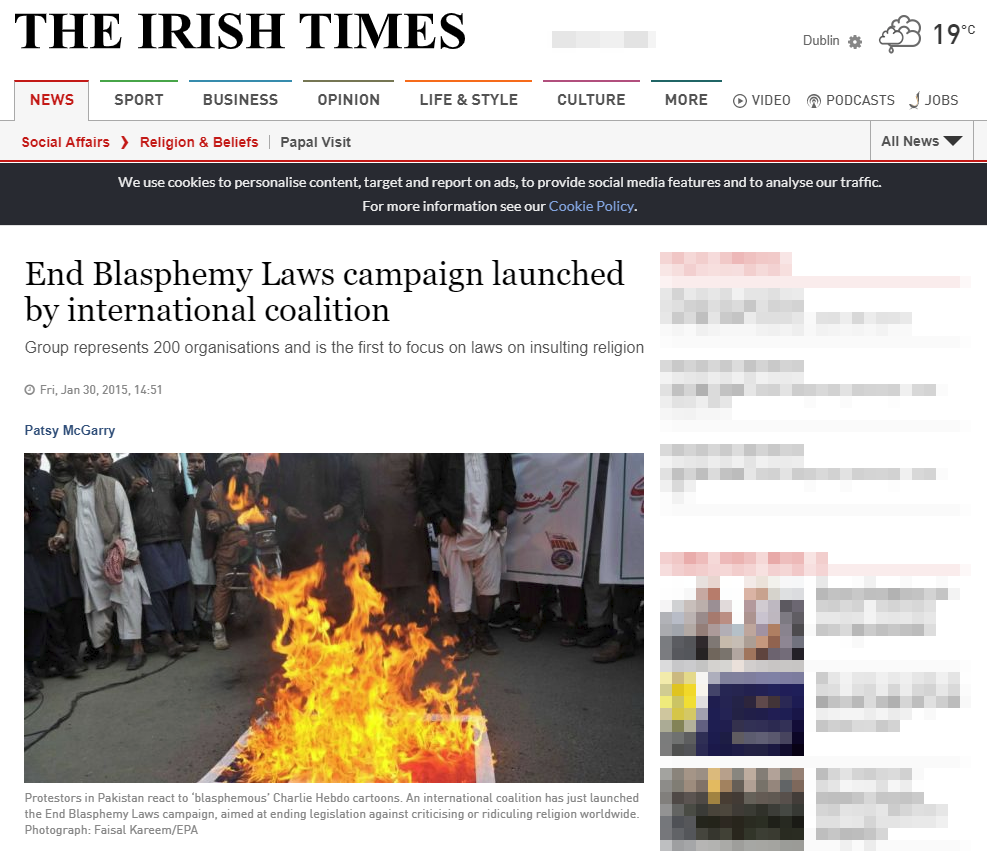 Coverage of the campaign launch

With a headstart thanks to the previous planning, we were able to launch a new campaign website by 30 January 2015 at End-Blasphemy-Laws.org.

The site provides background information about “What’s wrong with blasphemy laws” and a page for every country with a law against “blasphemy” explicitly, or any similar laws criminalizing freedom of expression about religion per se. The content has been used by activists, lawmakers and journalists covering the issue of “blasphemy” legislation and outrages executed in the name of punishing accused “blasphemers”.

We continue to work with partners in the coalition to coordinate campaign actions aimed at the abolition of “blasphemy” laws anywhere in the world.

As of June 2019, since the campaign launched in 2015, seven countries have repealed “blasphemy”: Malta, Norway, Denmark, Iceland, Canada, New Zealand, and one province of France, with similar legislation pending in two further countries: Ireland and Greece. 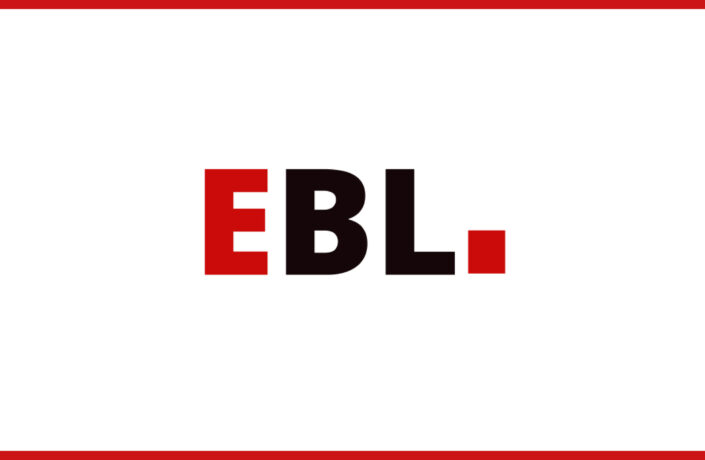