A coalition of secular groups is responding by lobbying Pakistani authorities and Twitter, as well as promoting a new #TwitterTheocracy hashtag campaign and asking supporters to sign a petition to the social networking company.

The block by Twitter is an extension of its ‘Country Withheld Tool’ which the company has defended on the basis that it is better to have censored speech than no presence in various countries. However, over the past month, Twitter accounts have been suspended and tweets have been blocked in Pakistan; a Twitter user has recently been jailed in Turkey for a “blasphemous” tweet. As documented in the IHEU Freedom of Thought report, across the world, blasphemy laws are key tools used by those in power to actively persecute minorities. We urge Twitter and all other international companies and organizations to uphold human rights-based standards of conduct, particularly when it comes to freedom of expression.

Today, June 10th, tweet hashtag #TwitterTheocracy and speak up about how Twitter has chosen to side with theocratic regimes instead of those who are trying to resist those regimes. 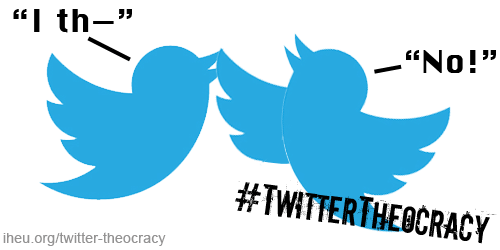 “The idea that it is better to have censored access to social media and search, rather than none at all, is debatable. The blasphemy law in Pakistan is widely used to harass minorities, and to suppress free speech which, for example, legitimately criticises certain religious authorities or practices. Any company which gains business in a state by cooperating with laws like this is complicit.

“It’s not just about censorship in Pakistan, or abstract concerns about freedom of belief. It’s about the growing number of people in jail on death row under permanent threat of execution, it’s about mob killings of those accused of ‘blasphemy’, it’s about a permanent state of fear that prevents questioning and progress for the religious and the non-religious alike.

“I know Twitter posts take-down requests to another site but that’s not good enough. That’s not really taking a stand, not when the stakes are so high.”

“There was a time when Twitter was rightly lauded for the role it played during the Arab Spring, facilitating communication between those resisting oppressive governments… Lately, Twitter seems to have moved away from its ethical, pro-human-rights stance, and caved to the demands of oppressive governments. By using its ‘Country Withheld Tool’ to enable government authorities to censor content, Twitter is aiding the enforcement of laws that violate both the UN declaration as well as the secular values of the separation of church/mosque and state.”

We urge you to use your freedom of expression, and tweet using the hashtag #TwitterTheocracy on June 10th, 2014. Along with tweeting the hashtag, we ask that you sign the petition, to call out Twitter’s complicity in censoring dissenters and aiding the theocratic agenda in Pakistan and elsewhere. If you care about freedom of expression and human rights, please speak up, join this campaign, and share this page with your friends and social networks.

The organizations are also writing to the Pakistani ambassador to the UN.

This campaign is by: