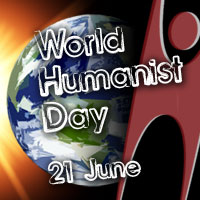 Today, humanists everywhere campaign for freedom for all.

We work for freedom of belief: for the right of everyone to live without having a religion or ideology imposed upon them, to make up their own minds without coercion. Too many people today in too many states don’t have that right.

We fight for the universal human right of freedom of expression: a right under vicious attack in many parts of the world. There are many in prison, tortured or sentenced to death simply for exercising this basic human right. We have seen, in Bangladesh and elsewhere, people murdered by religious militants because they have expressed humanist views.

World Humanist Day is a chance to remember and highlight those people and continue to fight for their freedom.

As humanists, we oppose all forms of discrimination against people because of their race, sex and gender, sexuality, so-called “caste”, or their religion or belief. We affirm the worth, dignity and autonomy of every human being to the greatest possible freedom compatible with the rights of others. Humanists everywhere are putting their principles into practice, through inclusive humanist schools, projects supporting survivors of abuse, people developing mainstream educational materials, supporting migrants and promoting ethical giving.

Humanism as a positive life stance is gaining increased recognition, and there are now more people who identify themselves as humanists than ever before. This gives me great optimism for the future.

Now is a great time to add your voice to the growing humanist movement – join IHEU today and help us to make a real, positive difference.

World Humanist Day is the perfect day to get involved in the worldwide humanist movement!