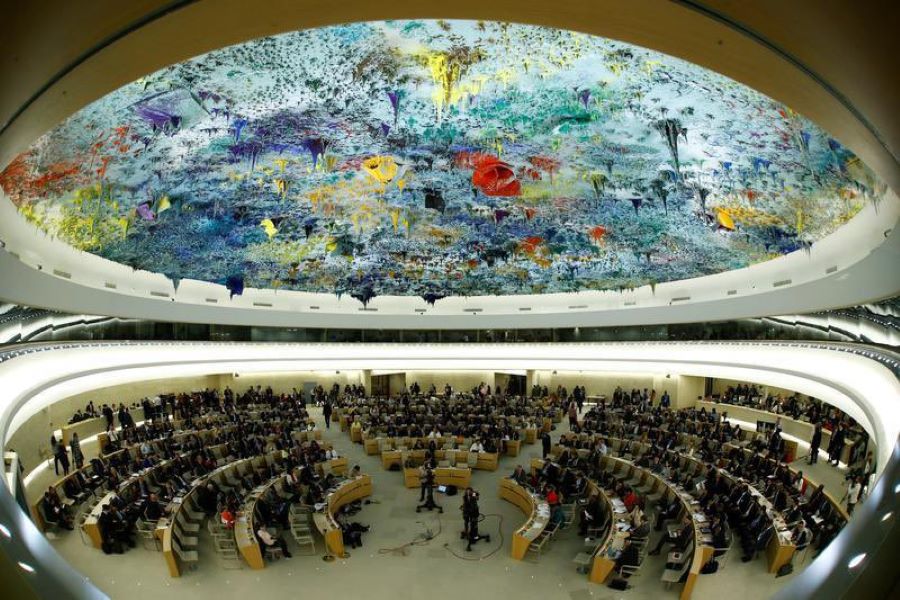 The members of the United Nations Human Rights Council have today voted overwhelmingly in favor of a resolution calling for the establishment of a Commission of Inquiry in Ukraine, to monitor and ensure accountability for all human rights violations following Russia’s military invasion. 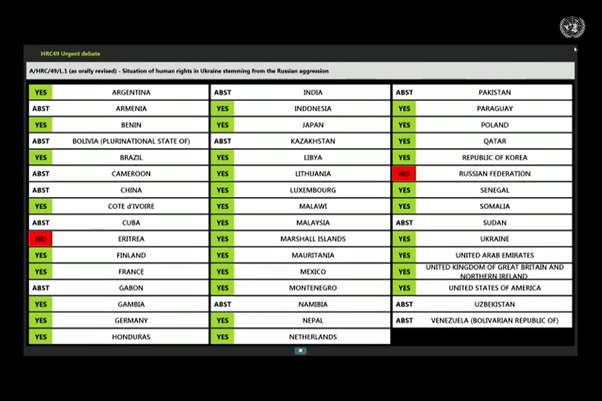 The resolution was passed following an urgent debate organized by the Human Rights Council in response to the situation in Ukraine.

It also calls for the swift withdrawal of Russian troops and Russian-backed armed groups, and “urges immediate, safe and unhindered humanitarian access, including across conflict lines, to ensure that humanitarian assistance reaches all those in need.”

The independent international Commission of Inquiry will be constituted by three human rights experts, to be appointed by the President of the Human Rights Council for an initial duration of one year.

The resolution was tabled by Ukraine and had 67 co-sponsors, including Albania, Australia, Georgia, Montenegro, Turkey, UK, USA, and all EU Countries apart from Hungary. 32 countries voted it favor of its adoption, 13 abstained and only two countries voted against its adoption: Russia and Eritrea. Following the adoption, the Ukrainian Ambassador said that the overwhelming vote shows Putin “the whole world is against you.”

Humanists International took the floor during the debate, and supported the call for the establishment of a Commission of Inquiry to report on the situation in Ukraine and to promote accountability for all forms of human rights violations occurring there.

The statement, made by Humanists International’s Director of Advocacy, Elizabeth O’Casey, also highlighted how the oppressive human rights climate in the Russian Federation itself has helped facilitate its action against Ukraine. She said,

“The severe restrictions on free expression, the widespread propagation of disinformation, the repression of civil society, and the intimidation and censoring, and criminalisation of journalists all contribute to the Russian government being able to wage a war of aggression without accountability at home.”

Currently, a bill essentially criminalizing independent reporting on Russian army operations is being drafted in the State Duma.

O’Casey also called for the immediate suspension of Russia as a member of the UN Human Rights Council. She said,

“Mr President, we meet today at the UN Human Rights Council; a body specifically tasked with protecting and promoting the human rights of all. To have a country that is, as we speak, dropping bombs on innocent civilians and wilfully blocking any action at the Security Council, continue to sit as a member of this Council is nothing less than a stain on the Council’s integrity and a shame on us all. Any resolution adopted must urge the General Assembly to suspend Russia’s HRC membership immediately.”

The UN General Assembly resolution (60/251) , that created the Council in 2006 allows for any state which breaches the UN Charter or does not cooperate with UN mechanisms to have its membership suspended.

Earlier this week, 63 UN Human Rights experts collectively called on the Russian Federation to immediately end its aggression against Ukraine and call off its unnecessary and unprovoked military attack.

The vote of the Human Rights Council comes two days after the UN General Assembly voted to adopt a resolution condemning Russian action in Ukraine. The GA resolution demands that Russia stop its aggression and that it withdraw all of its military from Ukraine. It also deplores the involvement of Belarus in the unlawful use of force against Ukraine. The resolution was sponsored by 106 countries, and passed with 141 voting in favor. Five countries – Belarus, North Korea, Eritrea, Russia and Syria – voted against, and there was 35 abstentions, including by China, India, Serbia, and South Africa. It came as part of an emergency session convened by the General Assembly after Russia vetoed a Security Council resolution that would have deplored the assault on Ukraine.