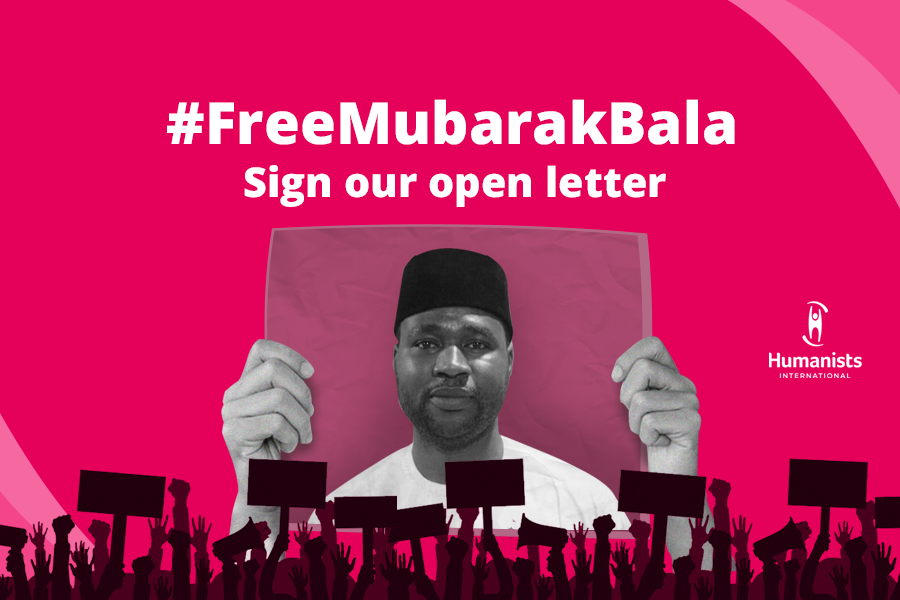 Two years on, humanists across the globe call for the Governor of Kano State to Free Mubarak Bala

On the second anniversary of his arrest, humanists across the globe continue to call for the release of Mubarak Bala, President of the Humanist Association of Nigeria, currently serving a 24-year prison sentence in connection with his Facebook posts.

Arrested from his home in Kaduna state on 28 April 2020, Bala – a human rights activist and President of the Humanist Association of Nigeria – was held without charge for more than a year. He faced charges before the Kano State High Court in connection with Facebook posts he is alleged to have made over the course of April 2020, which are deemed to have caused a public disturbance due to their “blasphemous” content.

Initially facing 10 counts of causing a public disturbance under Sections 210 and 114 of the Kano State Penal Code, respectively. In a surprise move, the Kano State Attorney General introduced 8 additional charges the day before the trial was expected to commence. On 5 April 2022, Bala pled guilty to all 18 counts – contrary to legal advice – and was sentenced to 24 years in prison. It is believed that he was subjected to intimidation, and could have been tricked into pleading guilty in the hopes of a more lenient sentence. Bala’s lawyers are expected to appeal the verdict.

Throughout the past two years, Bala’s case has been mired with procedural irregularities that represent violations of his fundamental rights enshrined in the Nigerian Constitution, and international law. In addition to being arbitrarily detained for 15 months, there have been several other violations of his rights to a fair trial, which include denying Bala access to his legal counsel until October 2020, failing to comply with a December 2020 Federal High Court order to release Bala on bail, and consistent attempts to obstruct the work of Bala’s legal team.

“For two years the humanist community around the world has continued to campaign for his release. We will not rest until Mubarak is safely released, and united with his family. I would like to thank everyone who has rallied to our call.

“To the authorities in Nigeria, I say this: justice will prevail for Mubarak. And the global humanist movement will work tirelessly to see that it does. We will never forget about or turn our backs on Mubarak.”